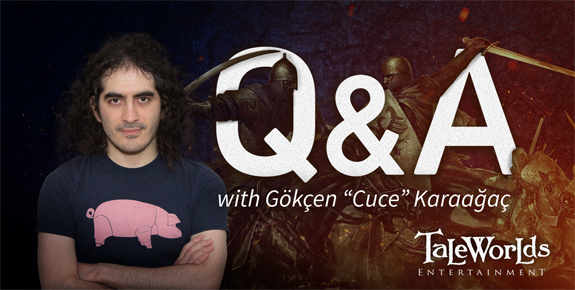 Should you enter, let’s say, a castle for the first time, you would get lost in minutes. The debris of that ruined tower would not have fallen so handily as to be climbable to the top. The path to the Lord of the castle would not be perfectly illuminated with torches which leave empty, useless halls in darkness. And, should you enter a real battle, there wouldn’t be overturned carts conveniently distributed so you can move from one cover to the next. This is because there is a big (and obvious) difference between real life and video games: life doesn’t have to be fun. A level designer’s work is to create these set pieces where you live your great adventures: places and landscapes that present just the right amount of challenge, which, at times, guides you like an invisible, subtle hand, and evens the scales so that every fighter on the battlefield has a fair chance. In this week’s blog, we talk with Gökçen “Cuce” Karaağaç, one of our level designers, who will explain more about his job and what he is doing for Mount & Blade II: Bannerlord.

WHAT DO YOU NORMALLY DO DURING YOUR DAY?
“Most of my time is spent on working with our scene editor. I bounce around between our engine and campaign teams depending on if we are working on new features or redesigning or polishing existing features.

In addition to this, there is always constant progress with multiplayer. I make new maps or improve existing ones, join combat-related tests, gather feedback, watch people play and make improvements for the next test.”

WHAT DO YOU LIKE THE MOST ABOUT BANNERLORD?
“Sieges! They bring together so many things that are unique to Mount and Blade, and with Bannerlord they become quite the spectacle. Sieges are the climax of your efforts in the campaign. When you are attacking you see the army you painstakingly built up slowly melt away as you approach the walls to claim your prize. As a defender, you fight to hold on to the gains you made after months of fighting and diplomacy. Sieges are where you see the result of your campaign efforts most clearly.”

WHAT'S THE MOST DIFFICULT THING THAT YOU SOLVED SO FAR, DURING THE PRODUCTION OF BANNERLORD?
“Cavalry and foot interactions on multiplayer maps are what trouble me the most. When cavalry units can move at 4x the speed of foot units but are less manoeuvrable, while foot units have a perfect turn rate and can traverse tight corridors and sharp corners with ease, things tend to get a little complicated. On top of that, when you have horse archers, throwing weapons and 6 factions with different mounts, you have quite a few things to think about.

An area could be just large enough so that a heavy Vlandian knight can manoeuvre around enemy spearmen but still get punished for his mistakes, while the same area might be wide enough for the nimble Khuzait horse archer to stay completely out of reach. Likewise, swift Aserai light cavalry could just zip through one opening to another, barely exposing themselves while charging down enemy infantry. And while all of these things are all great for depth of gameplay, they could also be extremely frustrating if players can abuse them.

So, in pretty much every map, we try to add multiple elements to create fun interactions between cavalry and infantry: ditches to disrupt cavalry charges, serpentine corridors to slow them down, small fences that only cavalry can jump over, paths that are too time-consuming for infantry to use, etc.

I can’t say this issue is solved yet, but it is satisfying to work on! I often find myself tweaking a corner so that cavalry can approach from one angle but not the other, or by adding a place for a crafty spearman to hide and ambush unsuspecting horse archers.”

WHAT DO YOU CURRENTLY WORK ON?
“Nowadays I’m working on the world map; creating settlements and adding details. It’s a process I do together with our 3D Artist, Umit. That being said, most of my time is still dedicated to my work on multiplayer maps, and with creating new castle and city scenes.

This week I worked on this Sturgian coastal city:” 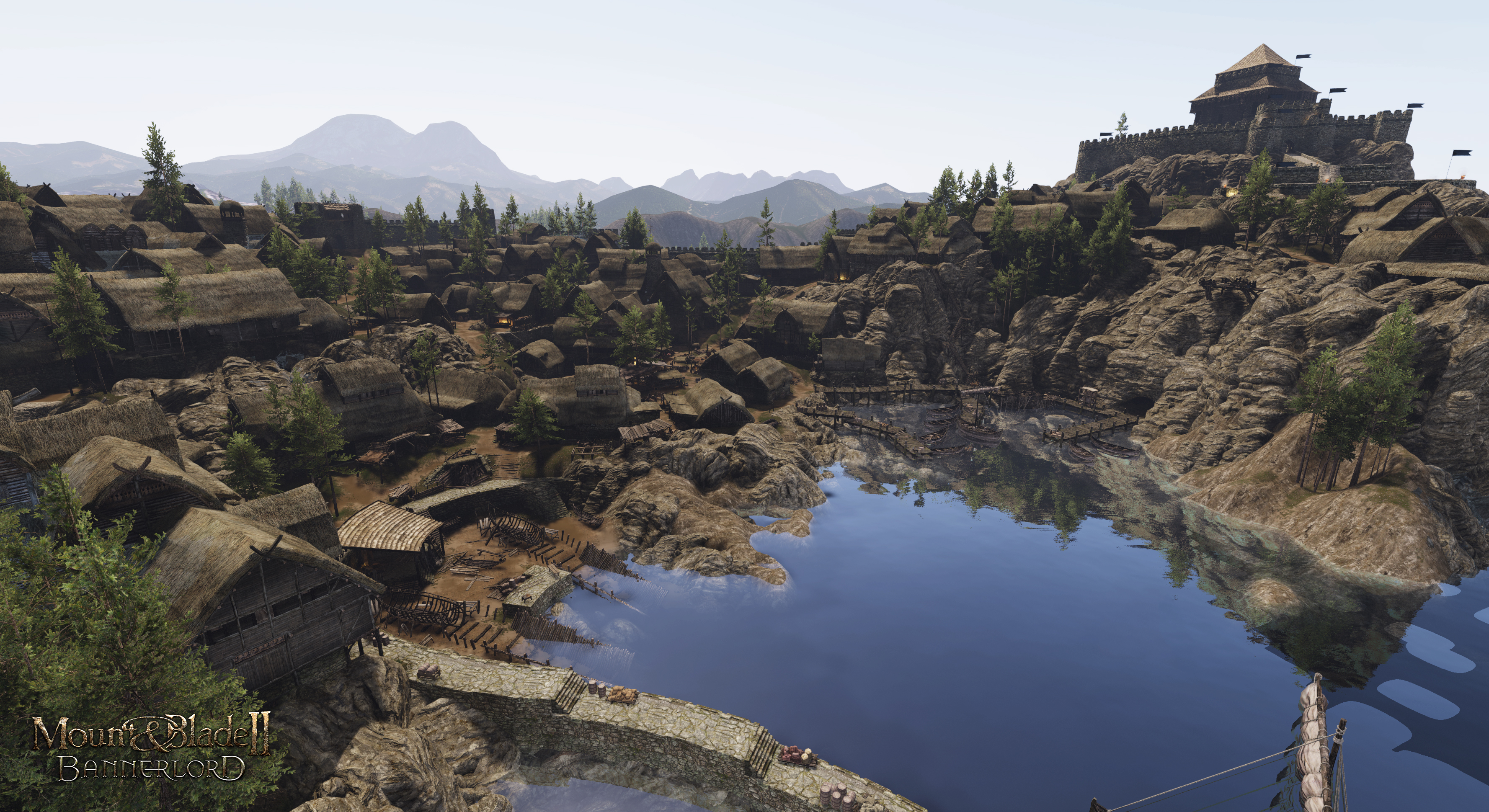 WHAT FACTION DO YOU LIKE THE MOST IN BANNERLORD?
“Khuzait: they offer the most of what is unique about Mount & Blade.

Aesthetically they have a great contrast to the other factions, with wide open maps, sparse landscapes, stunted horses, and eastern clothing. They play their part of invaders from a faraway land really well.

As you grow your army, you can see your horde riding towards the enemy, kicking up dust and filling the air with arrows. Soon after, the organised battle lines of your more sedentary rivals fall into chaos.

Also, a nomadic collective of tribes ploughing through a disorganised empire is just the nature of the early medieval times.”

WILL BANNERLORD FEATURE A USER-FRIENDLY SCENARIO EDITOR?
“Yes! Modders will have access to pretty much what I’m using right now. Only, it will be more robust and have a prettier and streamlined interface.”

WHAT IMPROVEMENTS HAVE BEEN MADE TO RANDOMLY GENERATED BATTLE SCENES COMPARED TO WARBAND?
“We don’t have randomly generated battle scenes in Bannerlord. With our new engine and new map editing tools, we are much more efficient at making terrains with no settlements on them. We realised that we can have enough handmade maps for battle scenes. We designated areas on the world map with biomes and tagged our battle scenes according to their features.

This helps us to have consistent quality and fun gameplay with all of our battle scenes, with hand placed spawn positions, managed distances according to party size and many other small details to spice up your gameplay.”

WHAT IS THE LEVEL DESIGN PROCESS FROM START TO FINISH AND HOW DO YOU CREATE LEVEL DESIGN VARIETY FOR BOTH MULTIPLAYER AND SINGLE PLAYER?
“The process varies quite a bit depending on the type of the scene I’m making.

In our previous blog about castle design, you can see me going from ground up with a simple sketch while building a castle, deciding on various details as I make the map while trying to keep true to the vision I had in mind. It is mostly adding new buildings and walking around the map, checking the sense of scale and travel times. When the overall colour palette of the castle and terrain come together, I start to add details and scripts that turn the empty husk into a siege scene.

In comparison, multiplayer follows a completely form follows function approach. It’s theorycrafting, multiple versions of white boxes, as many tests as we can muster, people climbing places they shouldn’t, calculating travel times with various troop types, checking for possible spawn camping issues, the list goes on... At some point, you grow more confident about the layout and start to flesh it out with actual assets. We emphasise control points, differentiate one side of the map from the other, visually hide symmetry of the map, add landmarks for callouts, and many other small but significant details. We also try to make the visuals match the purpose (if a corridor lets you flank a choke point, it should be tight and dark, with small corners to create surprises). As always, the map making process ends with testing and polishing.” 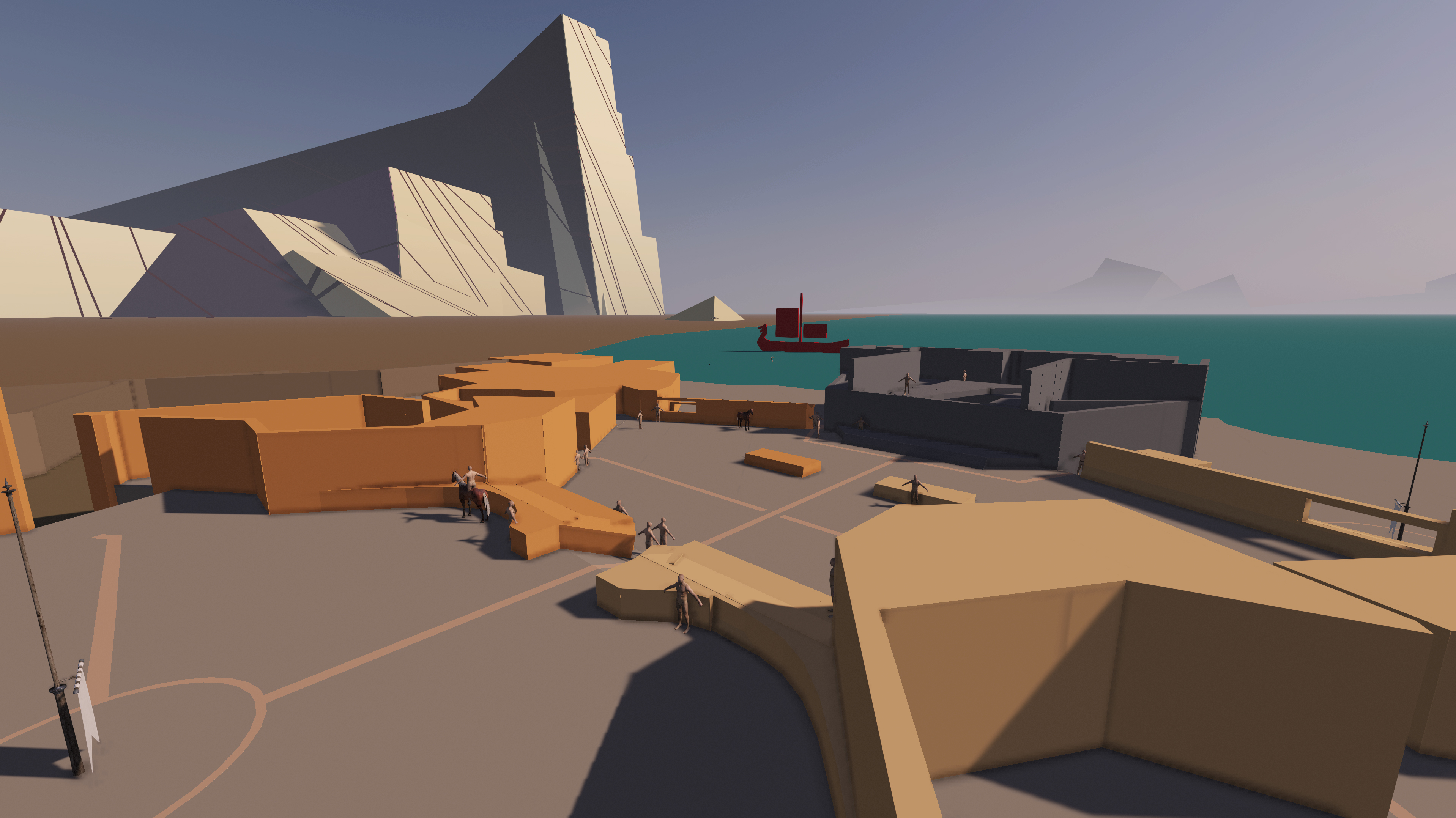 Join the conversation and comment on the forums! (141 comments)