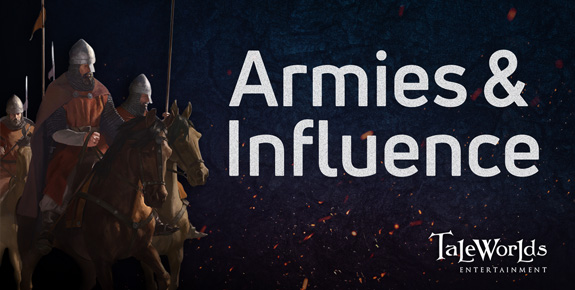 In this week’s blog we would like to talk about an aspect of the game which many of you have requested we talk about for quite some time now: singleplayer. We decided that the most interesting way to do this would be to discuss different features and mechanics from the campaign in their own dedicated blogs. We hope that, over time, we can touch on many of the key aspects of the sandbox and give you all a better understanding of what to expect in Mount & Blade II: Bannerlord.

In a previous blog we briefly discussed a mechanic which is new to the Mount & Blade series, influence. Influence acts as a kind of currency in the game and can be earned by serving your kingdom in various ways: destroying bandits or enemy parties, raiding, capturing enemy settlements etc. Influence points can be spent to determine the outcome of some faction decisions and to make requests to allied lords. We have already shown you that influence can be spent to ask an allied lord to follow you, but one thing we are yet to discuss is how players can use our new army gathering system to perform this action on a grander scale.

So how does this work? Well, each allied lord has an influence cost based on the power of their party. Players can spend their influence points to summon allied lords to form their own army. It is the leader of the army which gains all of the influence for the army’s victorious deeds, e.g. capturing a city will result in a huge influence boon for the leader, so spending influence to build an army is actually an investment, and sometimes even a gamble. If an army leader can no longer afford to spend influence then the army will start to disband.

Army influence upkeep cost is based on several factors:

As long as the army is successful in their efforts and the lord commander is keeping the other lords happy, then the army can go on marching for a long time. But if things don’t go so well, the army will quickly dissolve and lords will decide to abandon the campaign and return to their own lands.

When an army is gathered it becomes almost like a moving settlement, with its own UI overlay on the campaign map. The UI shows:

The UI also shows portraits of the lords which are currently a part of the army and their current relations with the player. Deep red means that they despise you, whereas bright green means that they are your favourite drinking buddy! If a lord has answered the summons and is travelling to join your army, or if they are currently away from the army on a mission, their portrait will appear greyed out with an indicator displaying their distance from the army’s current position, which is measured in days of travelling time. If you are an army commander you can click on a portrait to talk with a lord and give them a task to perform, such as scout ahead, bring food, bring reinforcements, bring horses, etc. You can dismiss lords to send them back to defend their lands or to trim the army and better manage your influence upkeep costs. If you are a member of an army, the army commander or other lords might have their own missions for you.

Another aspect of the new army system is that armies use pooled resources to support their campaigns. This means that if one lord brings some food, butter, for instance, then the rest of the army will be fed. Likewise, horses and mules are shared, increasing the movement speed of the entire army.

This new system allows for all lords to call on other allied lords and build their own army. Because of the large influence costs, it is of course easier for a king to do this, however there will certainly be times when some powerful lords will have more influence and money than their liege and will be able to amass their own powerful armies to take on a campaign. It also makes it possible for players to try their hand at army management relatively early in the game, before they have had a chance to climb to the top of a kingdom.

We feel that the new influence and army gathering systems better simulate the historical feudal system. When the player becomes part of a kingdom, they have obligations to their liege. This system allows players to pay for the benefits of being a lord by supporting their liege and fellow lords in military campaigns while building up influence within the realm to serve their own purposes. 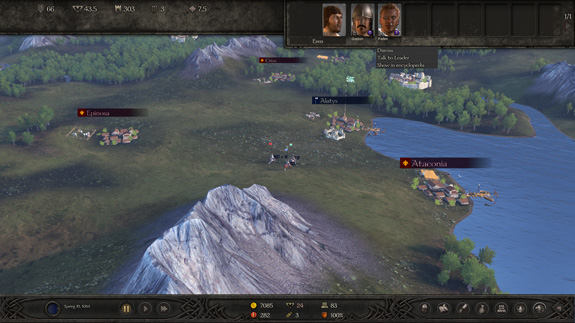 In next week’s blog we will talk with Graphic Artist, Fatma Nadide Öçba. If you have a question you would like to ask her about her work, please leave a reply in the comment section and we will pick one out for her to answer.

Join the conversation and comment on the forums! (116 comments)