Greetings ye faithful and thank you for coming to read the, somewhat belated, thirteenth of our here Bannerlord blogs. As promised, we're giving a rundown of what we showed at the PC Gamer Weekender (video below) in March, with some added detail, guided by the questions we received on the forums. Thanks to everyone who got involved whether directly asking questions or just discussing in general!

The first thing we show in the demo was our character customisation. This is a feature that has been refined and improved upon, since we revealed it at Gamescom last year, by tweaking and increasing the number of sliders to provide more control for the player. We also give a glimpse of facial animations, which help greatly in bringing characters to life and makes combat and dialogues much more immersive.Some of you have been asking whether or not you will still be able to create weird and wonderful (to put it euphemistically) faces, as in Warband and the answer is, of course, yes! Though our goal is to make the faces in the game, that are generated, look interesting but still believable.

Next we offered a look at the map, revealing the locations of our major factions. The colours may still change but it has been exciting to see your reactions to Bannerlord's expanded Calradia. One thing noted by the keen-eyed among our viewers is that, contrary to Warband, cities now have hard edges and parties are now required to go around them and enter at specific points. Our three Empire factions: Western (orange), Northern (magenta) and Southern (purple), are culturally the same but vary in behaviour, dependent on the personalities of their leaders and lords, the partners with which they can trade and their natural resources. In this sense, each develop their own nature, through the game mechanics, shaped partly by the actions of the player and the AI characters.

Unlike Warband, there are no standalone castles, but rather castles attached to villages. These can be constructed by players and lords but take a lot of time and money. Villages with castles can be captured and held, but those without onewill only change ownership dependent on who holds the local town.

In the small skirmish fight, we wanted to give you a taste of combat. To allay your fears, we also switched to first person; we are absolutely supporting both first and third person perspectives, as we have always done in the series. Combat continues to be something which we are constantly iterating on and working towards an ideal where we maintain the direct control of the previous games, but build upon that and add in new features. Kicking and Chamber-blocking (riposte) are still part of combat's roster of techniques and there are a few new things that we are looking forward to covering in detail.

Next we enter a town. As mentioned in the demo, the idea behind the town menu is to save the player time, keeping exploration optional and rewarding it in different ways. One feature we have added is wall strength, supported for both castles and towns, which affects behaviour and gameplay during a siege. From the town menu, you can immediately see who is located in the town and where they are currently located. 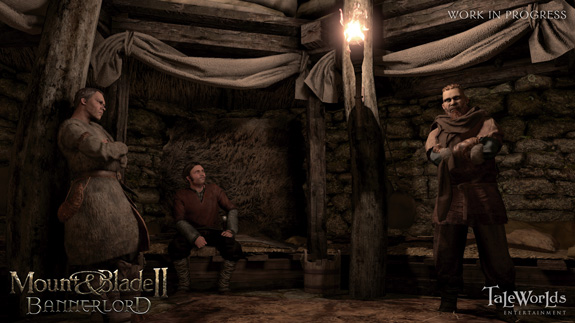 You can also see the various garrisons stationed in the town, which will defend the settlement in the event of a siege. In the demo, the player collects one of his own garrisons, that he had previously left in the town. Leaving troops in settlements allows you to go out with a smaller and faster travelling party to complete personal quests or pursue fast enemies. Any groups of soldiers garrisoned require that the player leave a companion with them, to act as leader.

As we step into the tavern, we once again provide you with a reminder of the efforts we have made, to create a distinct feeling with each culture in the game. Now, while we have made the taverns separate scenes, in order to prioritise improving the content and variety of gameplay that towns can offer, that decision may change in the future and there is a lot of work we can and will do to optimise and reduce the loading times as much as possible, before the game's release. The stream demo, from the Weekender, shows a Battanian tavern. This culture is one of the most distinct from any of the factions in the previous games and comes with interesting styles of architecture, attire, art and arms.

When we wander into the backstreets, we are confronted by a group of thugs and the dialogue is automatically initiated by the gang leader. The main advantage of engaging in crime is to make money quickly. It is cheaper and provides a faster return than a legitimate business. However, engaging in criminal activity while rising up the ranks of a faction increasingly puts the player in a difficult position. Regardless, the player can still choose to take part in criminal activity, at any time, even as a King; there are always costs and benefits. 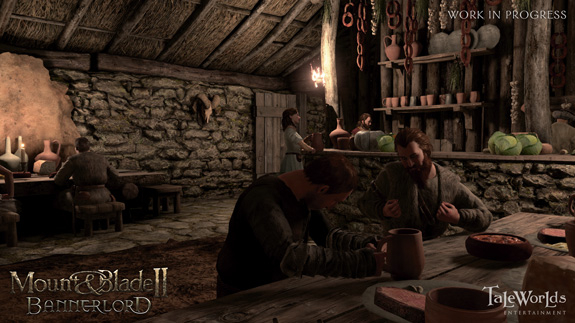 In the blacksmith, we choose to craft our own weapon and show the full process the player goes through. Nearly all of the melee weapons in the game use this modular system, adding a tremendous amount of variety. We have some statistics in the user interface shown here; most values are fairly self explanatory, such as Weight and Weapon Length. What's new is that, whereas in Warband the damage values and types were listed separately for swings and thrusts, we now have separate values for thrust and swing speed, as well as special cut and pierce damages, that are distinct from the base damage.

A new concept in Bannerlord is influence, which acts a bit like a currency, alongside gold and relation, but more directly affects our interactions with other characters in our faction. Influence is held for each lady and lord as a value to represent their contribution to their faction's war effort. Vassals can maintain their influence by joining military campaigns and the more troops they provide, the more influence they gain. What this does is form a system, where being part of a faction actually comes with a measurable level of responsibility. Keep your influence positive and the leader of your faction will be pleased, raising your chance of being awarded more fiefs; let your influence slip into the negative too far and you'll risk expulsion from the faction and your fiefs being seized. 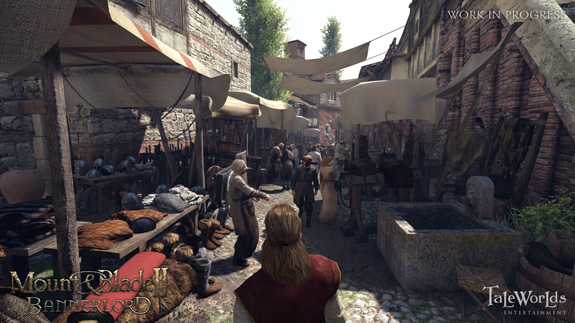 As we approach the enemy lord in the demo, we can see their troop count drop. We have mentioned that one of the main improvements in Bannerlord is a much more detailed simulation. Ladies and Lords are subject to almost the same pressures as the player and of course, their troops also disband if they aren't provided with food or pay. Our enemy, Ecarand, a Vlandian vassal, has a cautious personality. The personalities of characters in the game are defined by their traits, which are earned in a variety of ways and determine how characters react, are reacted to and can affect their behaviour.

The battle we engage in demonstrates how some of that behaviour translates to the battlefield. Ecarand, as the defender, takes position on the high ground and waits for us to act. Since the onus is on us to attack, as the aggressors, he is happy to hold the hill. However, some lords may choose to play aggressive, even as the defender. In the demo, Ecarand roundly trounces a group of our archers but only charges in when recognises that vulnerability.

Eventually triumphing over Ecarand, we then talk a little bit about what the knock-on effects might be of the battle. While Ecarand escapes, he has lost all of his troops and is now forced to rebuild his forces, if he is to maintain his influence within his faction. If he doesn't have sufficient income to do so, he may decide to take action, which could be anything from raising taxes on his peasants to setting up a criminal enterprise. Whatever he chooses, the effects of this will then play out in the sandbox, and could leave him suffering in the long term. The nature of the game, with so many factors like this coming into play, is one of the things we believe makes Mount & Blade so interesting. Look forward to even more detail about the campaign mechanics in the future and thank you for reading.

Join the conversation and comment on the forums! (352 comments)