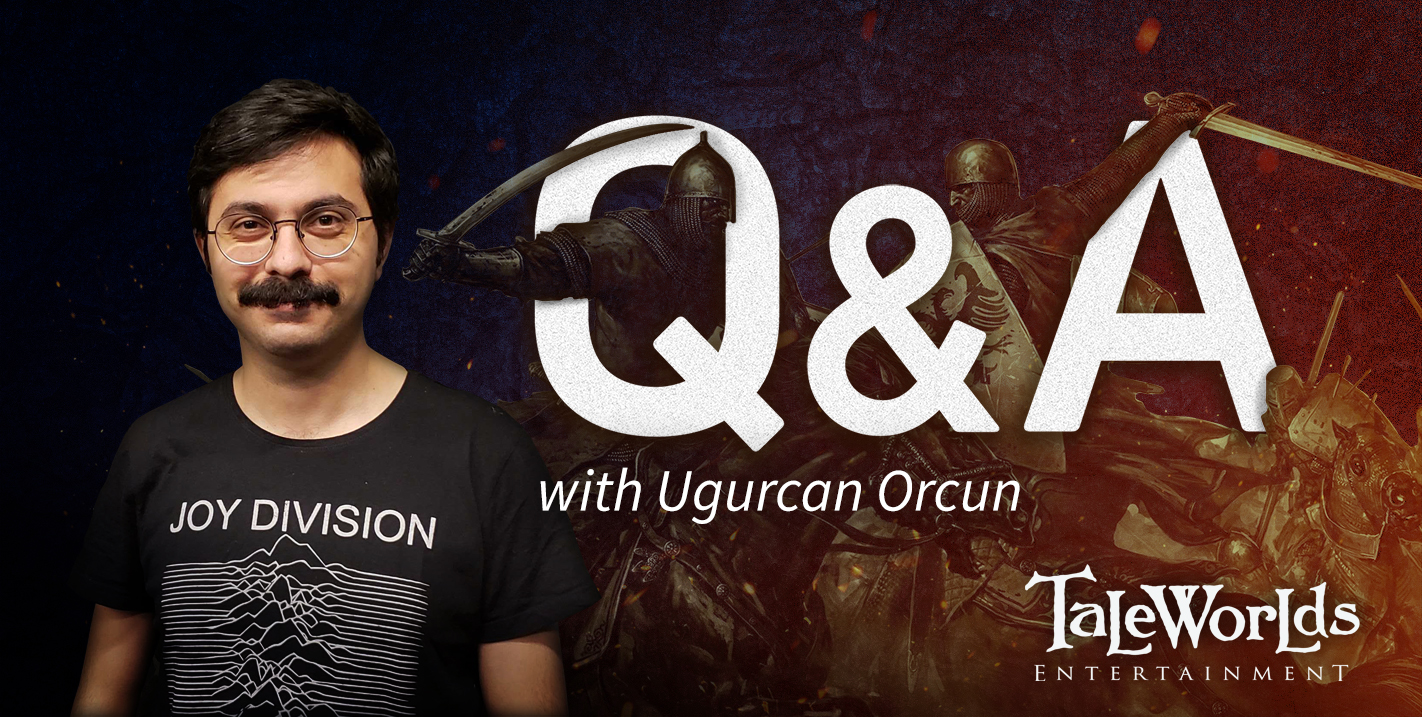 Everything counts to make a video game an immersive experience, from the smallest details of the UI to the art design, the graphics, and of course the gameplay – but there is an aspect that tends to be unjustly overlooked in spite of it having capital importance. We’re talking about sound. Imagine you are in the middle of a fight. The rasp of swords being unsheathed, the crunch of sand under the hooves of the horses, the screams and grunts of pain of soldiers – all that can make you feel in the thick of a battle, and that makes sound a very powerful tool for video games. Today we talk with Ugurcan Orcun, our Audio Director, who will offer some insights on how Mount & Blade II: Bannerlord approaches this area and what he is doing for the game.

WHAT DO YOU NORMALLY DO DURING YOUR DAY?
“As the only person handling all the audio tasks in the company, my daily duties vary a lot. I do sound design, game implementation, foley/field recording, voiceover recording, direction of music efforts, composing some extra music and most importantly, making sure every audible thing in the game world works as intended. So my ordinary day usually starts with playing the game itself and taking notes, then shuffling through my previous notes and feedback from the other teams to lay down a plan first. Sometimes I join other teams' daily meetings to get feedback from them directly.

To be honest, it feels like I'm working on three individual games. One is a strategy game, played on campaign map and settlements, where the player needs headroom to focus on ongoing events and decisions. One is a medieval combat game packed with action, where the player's emotions supported with solid music, good soundscape and satisfying fighting sounds. And the other one is Multiplayer, where we have slightly different definitions for fighting sounds, aimed for high-level play. Working on all of these is an ever-going, evolving process shaped by feedback, and there's always some other detail needs to be polished. As a veteran M&B player and modder myself, I really want to make Calradia more lively, realistic and enjoyable to listen to in Bannerlord.”

WHAT DO YOU LIKE THE MOST ABOUT BANNERLORD?
“Since the day I first played Mount & Blade (who remembers Zendar?), I always fantasized about how living in Calradia would feel like. At one point, I found myself responsible for how it *sounds* like, and since that day, I'm working on fulfilling my childhood dream.”

WHAT'S THE MOST DIFFICULT THING THAT YOU SOLVED SO FAR, DURING THE PRODUCTION OF BANNERLORD?
“Playing literally THOUSANDS of sounds. In other games, it’s common practice to give a single "crowd" sound to groups of people or army formations. But in Bannerlord, where big battles are at the core of the game, we treat hundreds of NPCs as individuals. Handling these without burning up CPUs and while building up a satisfying ambience out of individual sounds was one of the hardest, but the most enjoyable work I've done.”

WHAT DO YOU CURRENTLY WORK ON?
“A few of the things I'm currently working on are: renewing UI sounds according to our new style, making our ambient sound systems practical to use for modders and recording some voiceovers.”

WHAT FACTION DO YOU LIKE THE MOST IN BANNERLORD?
“I think it's Battania. Since my childhood, I have had a great admiration for lush and rich environments. Battanian territory feels like home to me! Working on Battanian soundscapes are always enjoyable and fighting for the Battanian cause just feels right.”

CAN THE PLAYER CHARACTER VOICE BE CHANGED? IF SO, FROM HOW MANY OPTIONS COULD THE PLAYER PICK? CAN IT BE DISABLED?
“There will be plenty of voice types to choose from for both females and males when you’re creating your character. And there are even some variations for horses too! Currently, they can't be disabled (by design).”

IS THE ENGINE ABLE TO DETECT WHICH SOUND TO BE PLAYED WHEN ONE IS WALKING ON DIFFERENT TEXTURES ON THE GROUND OR HITTING DIFFERENT TEXTURES WITH A SWORD?
“Yes. This was partly possible in Warband too, like with footsteps on wooden surfaces. Now we have a Physics Materials system built into the engine with many different surface types which affects weapon impacts, physics sounds and projectile hits, as well as, footsteps. Modders could provide their own definitions of Physics Materials, of course.”

IN WARBAND, I CAN HEAR PEOPLE FIGHTING WHILE I AM MORE THAN 200M FROM THEM. IS BANNERLORD DOING SOMETHING TO ENHANCE THIS EXPERIENCE?
“Totally! It just got better. We built up a custom system of distancing where sounds are not only attenuated but also filtered and echoed, just like you would hear in real life. Achieving this even on low-end machines was tricky, but a distant battle sounds like it’s really distant!”

Join the conversation and comment on the forums! (195 comments)