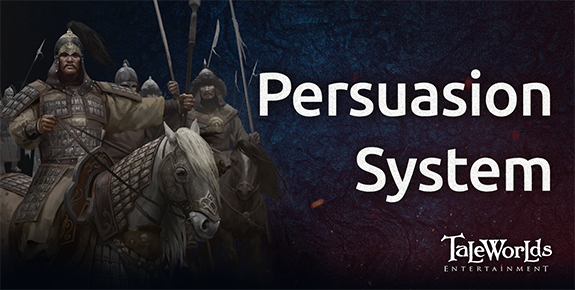 In this week’s blog, we want to introduce you to a brand new feature to the Mount & Blade series: the persuasion system.

No medieval drama, from Shakespeare to the Game of Thrones, is complete without a few scenes of high-stakes negotiation. Although most of our development effort goes into battles and combat, we also want to offer players alternative gameplay. Be it a plot to betray a king, a dynastic marriage, or just a way to handle a thorny conflict between your bickering subjects, skilled persuaders can find solutions to solve problems and save a bit of wear-and-tear on their sword-edges.

The persuasion system is based on the premise that, even in a dark and desperate land like Calradia, there are some things that money can’t buy. An honorable emir may feel compelled by his oath of fealty to stick by even the vilest of sultans. A conniving one might turn down the choicest bribe because frankly, he doesn’t think you have what it takes to win a civil war, and silver is no use to him if he’s dead. Persuasion is a means to help players overcome these reservations.

The persuasion system is also one of the main ways that Bannerlord’s personality and reputation system comes into play. If you have a reputation for generosity, people will believe you tell them that, if they do a favor for you, you’ll make it up to them further down the road.

Likewise, if people know you take honor seriously, they’ll be reassured if you tell them that, in your opinion, no one will ever blame them for breaking their oath to the Khan, who never kept his oath to anyone else. The NPC’s personality also plays a major role. A valorous warrior might respond better than a timid one to your courtship pitch, that he should marry you, a shield maiden who’ll fight by his side, rather than some dainty maiden with nothing to recommend her but vast tracts of land.

Personality is only part of the equation. You can also draw on a variety of skills. Charm helps you guess an NPC’s motivations and appeal to them. Charisma helps you inspire them. And, even if you don’t have much of an army at your back. Roguery is a good way to convince them that you’re not someone they ever want to mess with. Finally, the game tracks most major events, and if you can remind the Countess that the king you want her to betray murdered her cousin, or passed her over when last handing out fiefs, that will make your task much easier. We want players to feel the dynamic sandbox history of Calradia, and persuasion is often the time when a lord’s past mistakes, the dirty deeds, the slights to fragile egos, the unpopular policies, all come home to roost.

So how does the system work? All persuasion attempts are initiated through dialogs. You first need to steer the conversation to the relevant subject. You need to hint to the lord that his liege isn’t really worthy of his service, or maybe suggest to a lady that, it being a truth universally acknowledged that any ambitious young lady of title and substance must be in want of an upwardly mobile warlord to marry, you should perhaps discuss whether you are mutually compatible. At this point, the system calculates a “persuasion difficulty”. If this value is too high for any reason, the NPC will turn you down right away. But if not, you can start discussing specifics.

The NPC will then present you a number of issues where you will need to persuade him or her. During persuasion, you will see a progress bar, which shows how far you’ve gone toward convincing the other party. Every time you succeed in convincing the lord over a point, the persuasion bar will fill up a certain amount. If at the end you can fill up the entire bar, the NPC’s objections will be overcome.

His moral and long-term objections, anyway. Money can’t buy everything, but it’s usually at least part of the deal. The persuasion system is often a gateway that leads you into the barter system. Some lords will do anything for honor, or for revenge, but most want some sort of token of your appreciation up front. Each successful persuasion attempt will help to reduce the monetary cost of the action you would like to perform when it comes to the bartering stage, whereas repeated failures might make a deal impossible to reach. And if you push your luck too much, then you run the risk of severely impacting your relations with NPCs in a negative way.

Overall, we feel that the persuasion system adds a massive amount of depth to diplomacy in Bannerlord, giving players different options and ways to approach challenging situations that they are presented with. We think that it will give players greater control in playing the game in the way that they want to, opening up avenues and possibilities that were unavailable in previous games in the series. 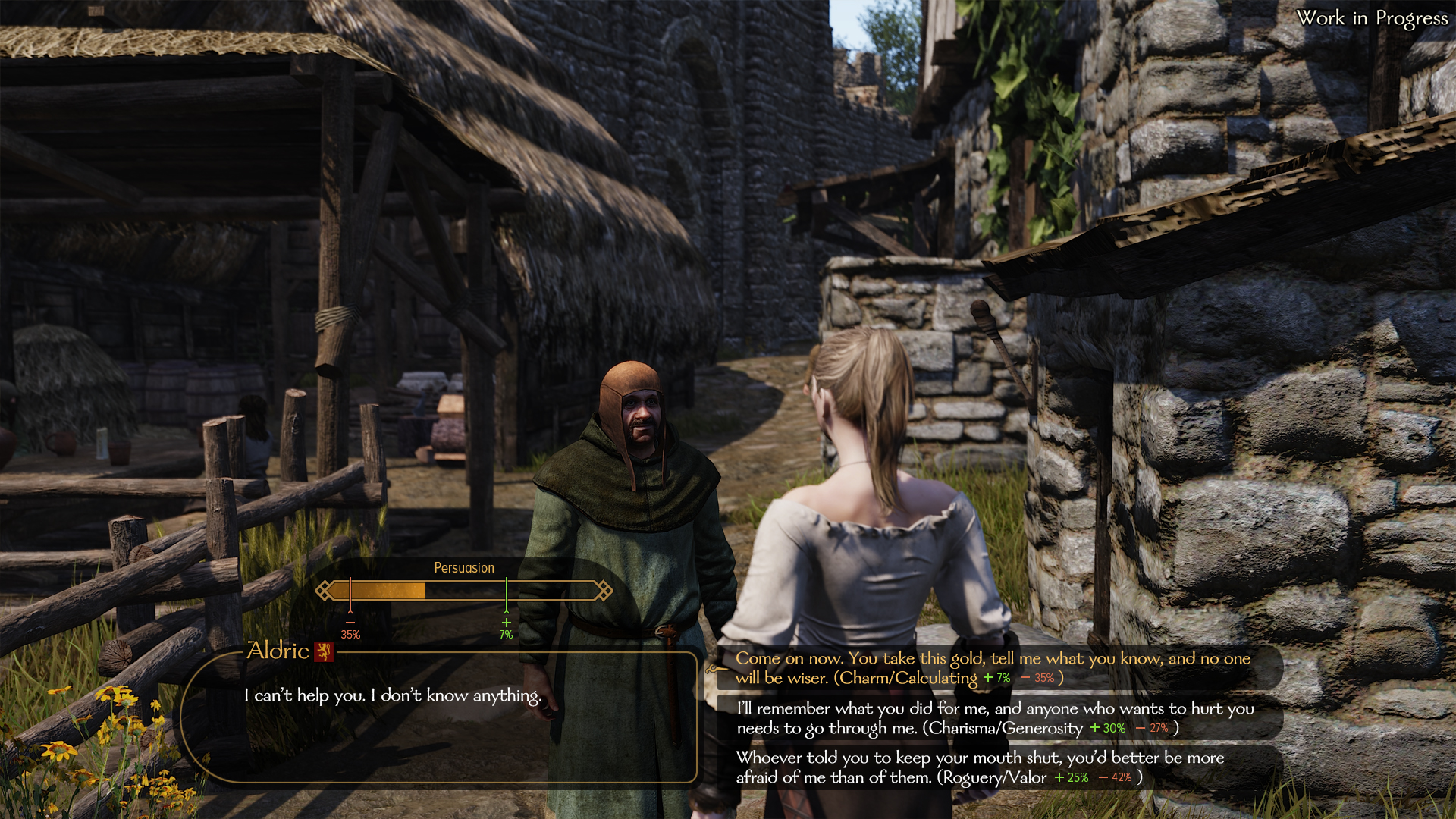 And that’s it for 2018 folks! We will be back in the New Year with more blogs (with the next one due on the 10th of January), so make sure you follow us on Twitter and/or Facebook to keep up to date with all the latest Bannerlord news as we march ever closer to that elusive release date. We hope that you all have a wonderful time over the festive season!

Join the conversation and comment on the forums! (178 comments)