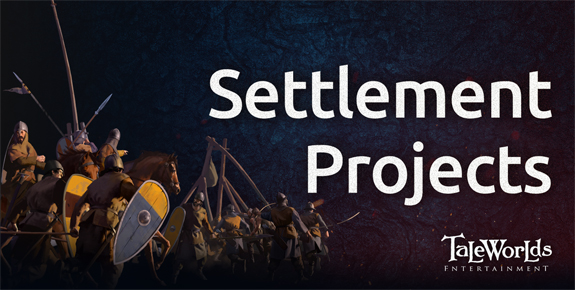 Becoming a noble is a major milestone in Mount & Blade games. It is the moment that your dedication and hard work is recognised and rewarded with land and title. In most cases, this will be in the service of a liege lord, however, we know that some of you prefer not to bend the knee and would rather carve out your own path in Calradia! But, regardless of how you obtain your own holdings, it is what you do with your new found gains that truly matters. 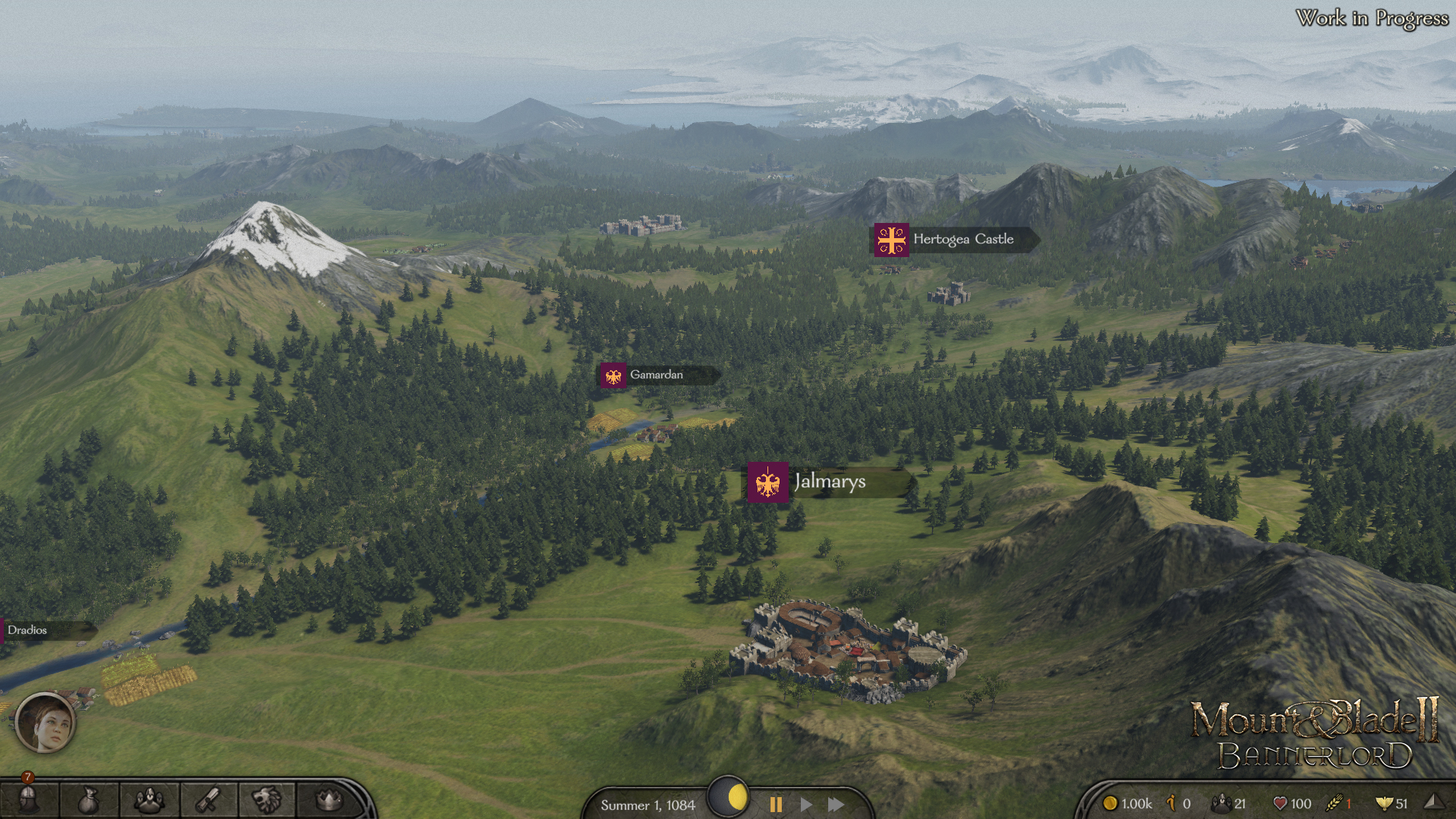 So, what makes obtaining your own fief such an important event in the game? Well, settlements are very much at the core of Bannerlord’s singleplayer campaign, and the majority of actions and events that take place in the sandbox revolve around them. They are the places where recruits are hired, wealth is built, and ultimately, what wars are fought over.

But, other than using them as a source of income, what can you actually do with your settlements?

Settlement Projects
Settlement projects are a way for players to improve their fiefs in a number of different ways. We can separate these upgrades into two categories: military and civic.

Military buildings, such as upgrades to the walls or the addition of a barrack, are all directly related to the settlement’s ability to play an effective role in times of war. Upgraded walls make the settlement harder to assault and a barrack enables the settlement to maintain a larger garrison to man those walls!

Civic buildings are focused more on the production and economic capabilities of the settlement, with buildings such as a carpenter’s hall, which helps to increase production in the settlement, or a vegetable garden, that provides a steady supply of food. However, some civic buildings offer bonuses which you could consider to be more military focused. For example, a granary allows the settlement to store more food, which will help it to hold out longer during a siege.

Settlement projects can be constructed in both castles and towns, with villages receiving bonuses from the castle or town they are connected to. With the massive increase in settlements that we have in Bannerlord, we felt that having to micromanage settlements all the way down to the village level would, over time (as your territory grows), become overbearing and tiresome to manage.

Settlement projects require manpower for the construction phase. We use a formula that determines how much progress is made with the construction each day based on the population of the settlement. And for those with a large purse, you can draft in some additional manpower to help speed up the construction!

Projects can be queued, meaning that you don’t have to worry about losing time with production if you are preoccupied with other tasks when the current project is completed. And if you manage to complete all of the projects in a settlement, or feel like you don’t need certain ones, you can invest this manpower into daily projects which will slowly develop different aspects of your settlement. The daily housing project, for example, will increase the population of the settlement by 1 each day.

Overall, we feel that settlement projects are a great way for players to tailor their fiefs to perform specific functions within the kingdom. Settlements deep within your territory might be better suited to producing food or bolstering your finances, whereas a castle bordering a hostile faction might be better suited to becoming a military stronghold from which to protect your lands and project your strength. Ultimately, we think that they give the player more tactical choices in terms of gameplay, and much greater control over (and hopefully a more engaging connection to) their fiefs than what we had in previous Mount & Blade games. 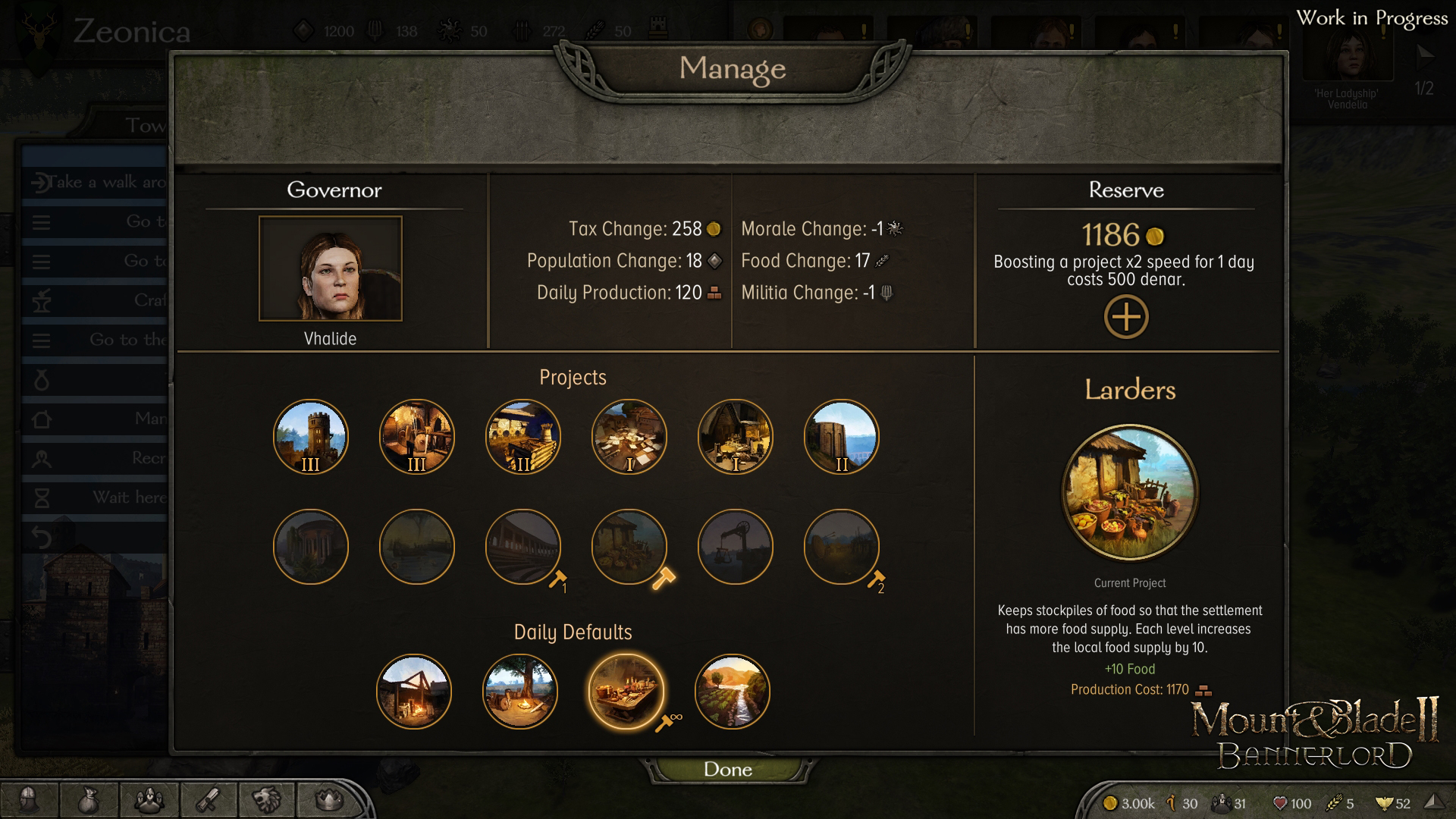 Governors
Our final point of discussion regarding settlements is the addition of a Governor role. The governor role allows you to offload the burden of managing your fiefs to a trusted clan member. They will handle all aspects of managing the settlement, providing the fief with small bonuses in the process, leaving you to focus on crushing your enemies!


In next week’s blog, we will be talking to Gameplay Programmer (Campaign Team), Selim Çam. If you have a question you would like to ask him, please leave a reply in the comments and we will pick one out for him to answer!

Join the conversation and comment on the forums! (104 comments)