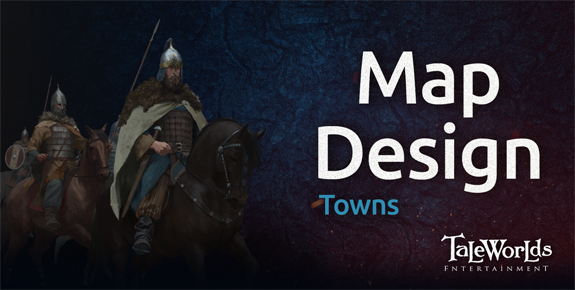 In the medieval ages, castles and strongholds were not meant to be dwellings, but military tools that were strong and easy to defend, positioned in choke points to protect an important region or trade route. Villages, on the other hand, were the population centres - places where people would dwell and sleep after a long day of work in the fields or herding their cattle. Towns were somewhat a combination of the two, but they were also very different (and complex) places. They had walls for defence and a high population count, but they were much more than just dwellings and defensive structures: they were the most important places around. Towns are where kingdoms forged their real power. Artisans worked raw materials into quality goods and merchants turned them into wealth. Courts were established in towns, so they were also the heart and brains of any realm -- where politics, conspiracies, and plots took place. 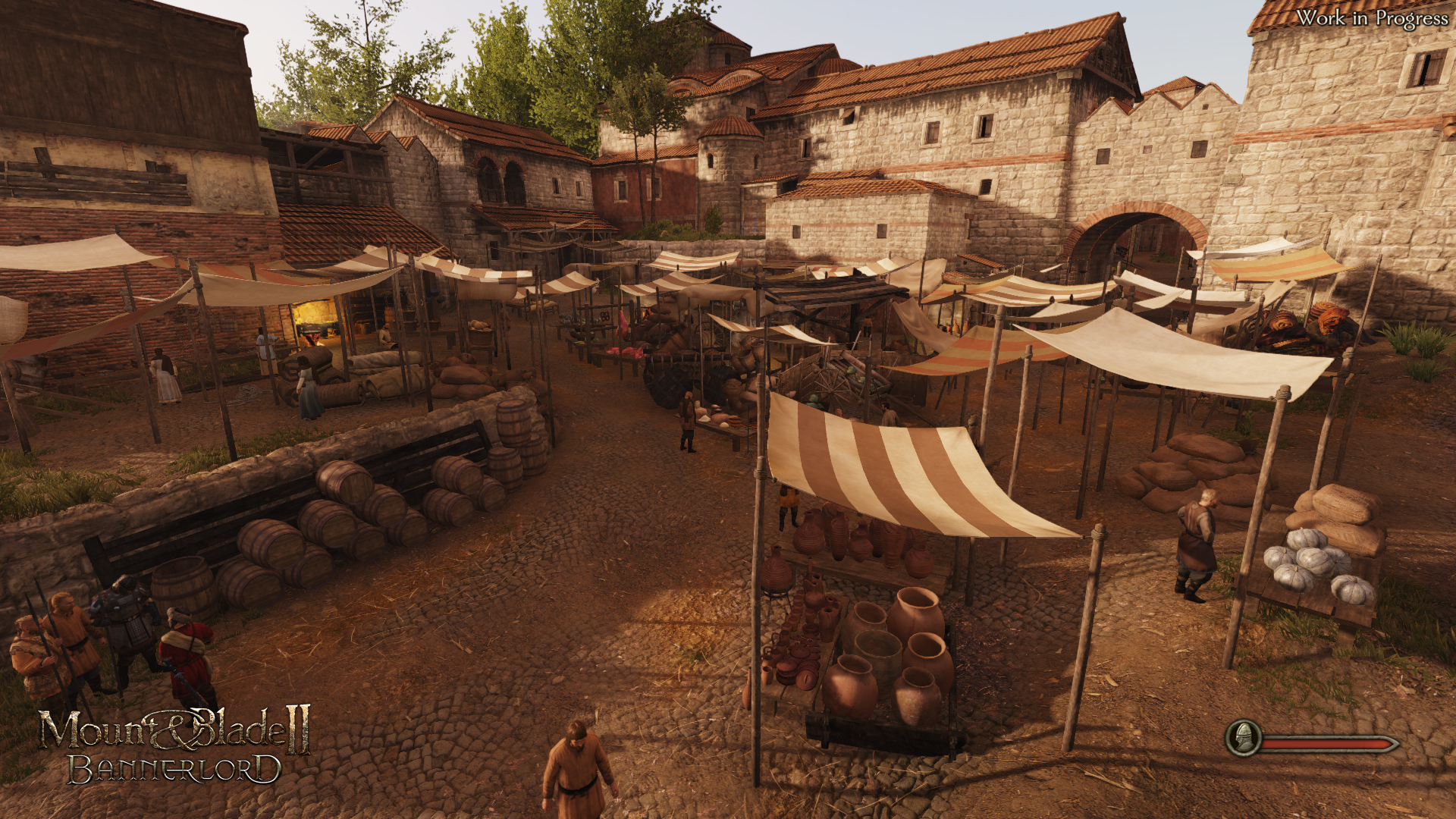 In Mount & Blade II: Bannerlord, towns are very much like their real-world counterparts. They are where industrial goods are produced, higher quality troops are trained, commerce flourishes, notable NPCs do their dealings and crime is prevalent. And this is exactly what our level designers try to reflect as they create each town scene.

In a previous blog, we looked at how we approach map design for castles, which share some similarities with towns (both have upgradable walls and both can be besieged). However, when it comes to design, towns are a completely different beast. 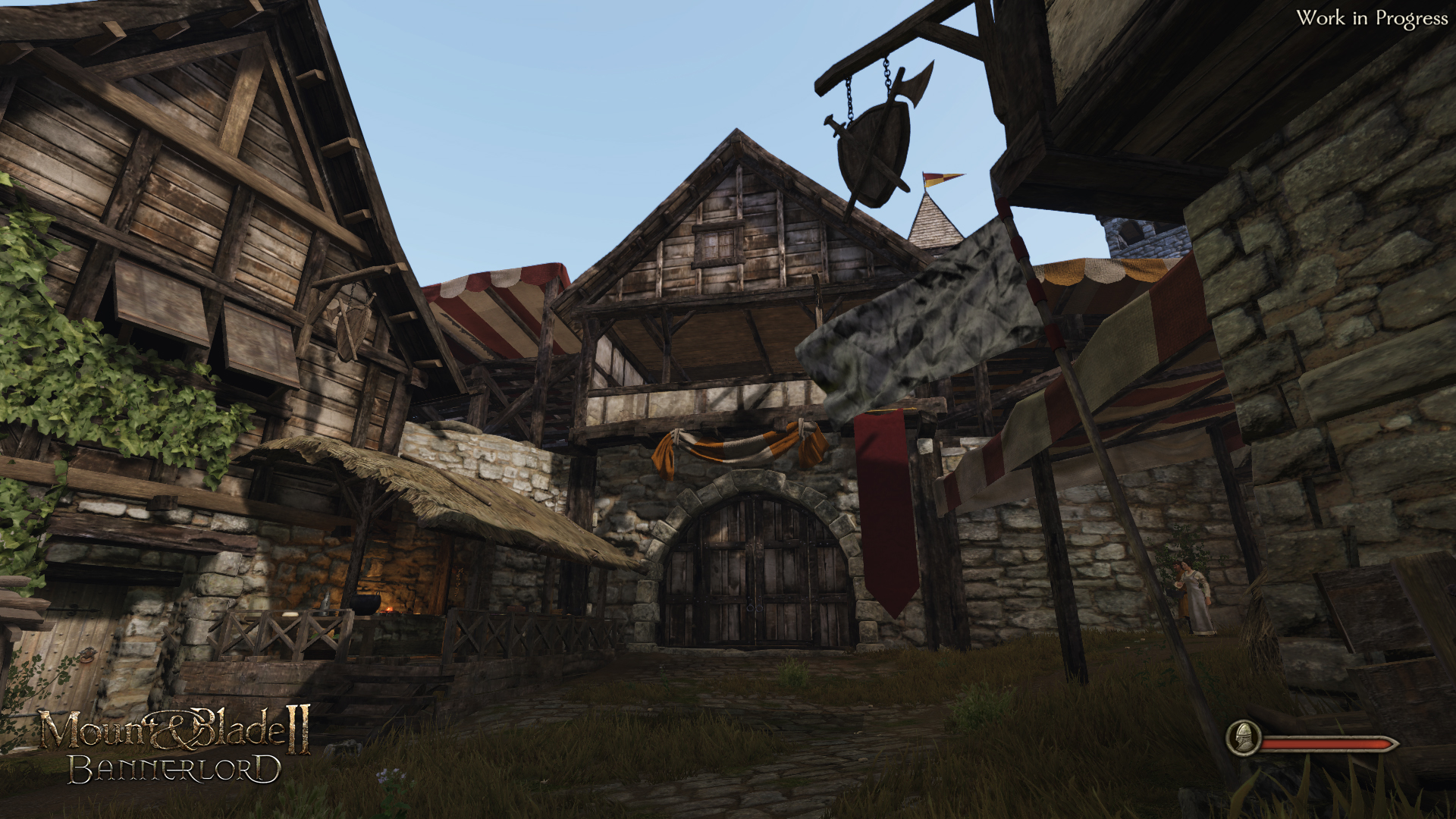 As we design the layout of each town, we tend to divide them into recognisable districts, so that players can develop an instinct for where they can find what they are looking for. This isn’t so much a rule that is set in stone, as we want to stay fluid in our approach to level design, but all of our work on these scenes share similar design principles. 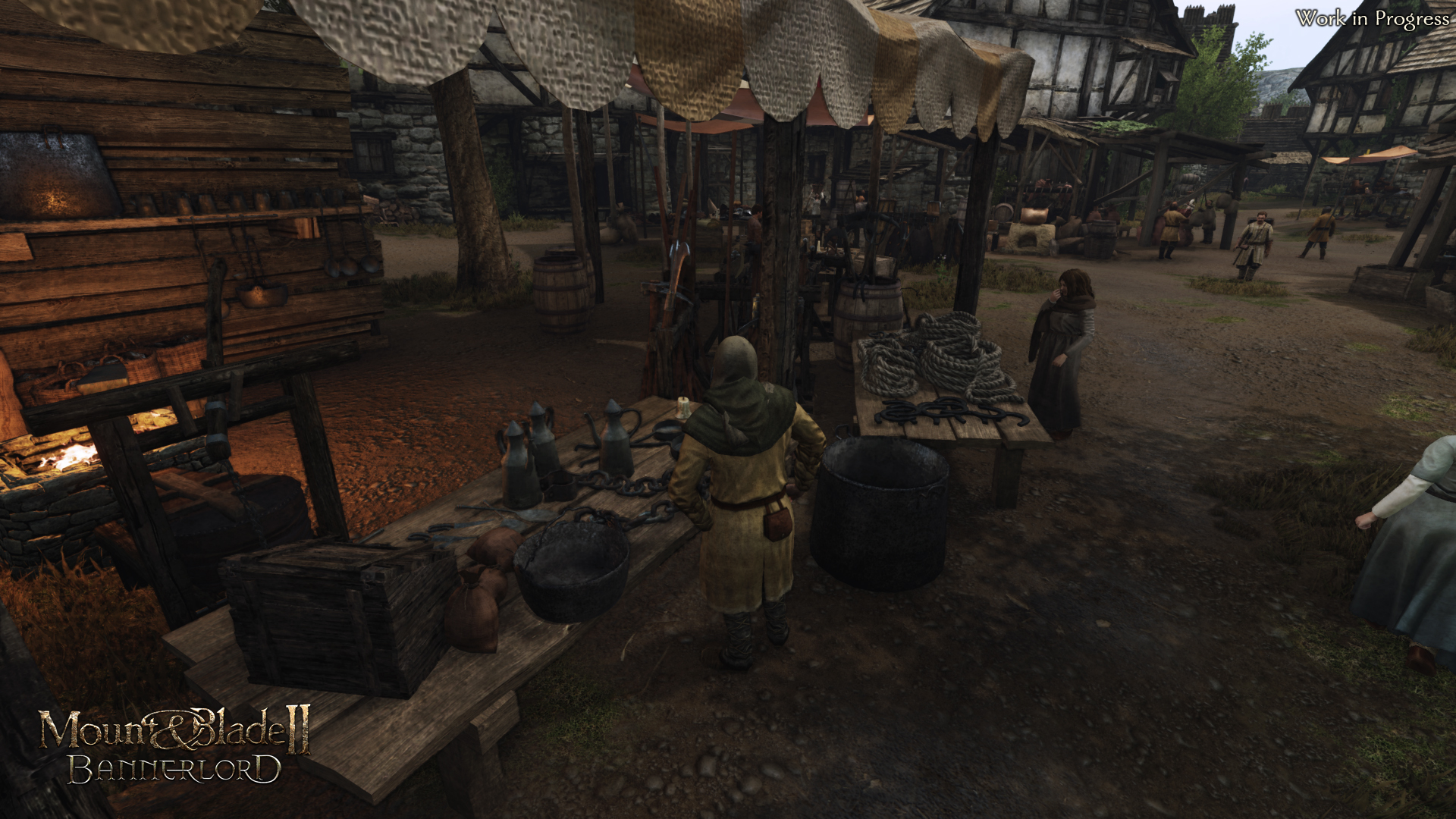 Gameplay
We understand that no matter how nice and immersive we make our towns look, walking around them creates downtime from your conquering and pillaging. For those of you who would like to rest between your various exploits, we have many small details to explore and discover in our towns. However, for those who are in a hurry, we group interactable NPCs together according to their roles for ease of access for players. And for those of you that don’t want to set a single foot in a town, we have the settlement menu, where you can access practically every function available in towns directly from the campaign map (barring a select few that we save for immersion). 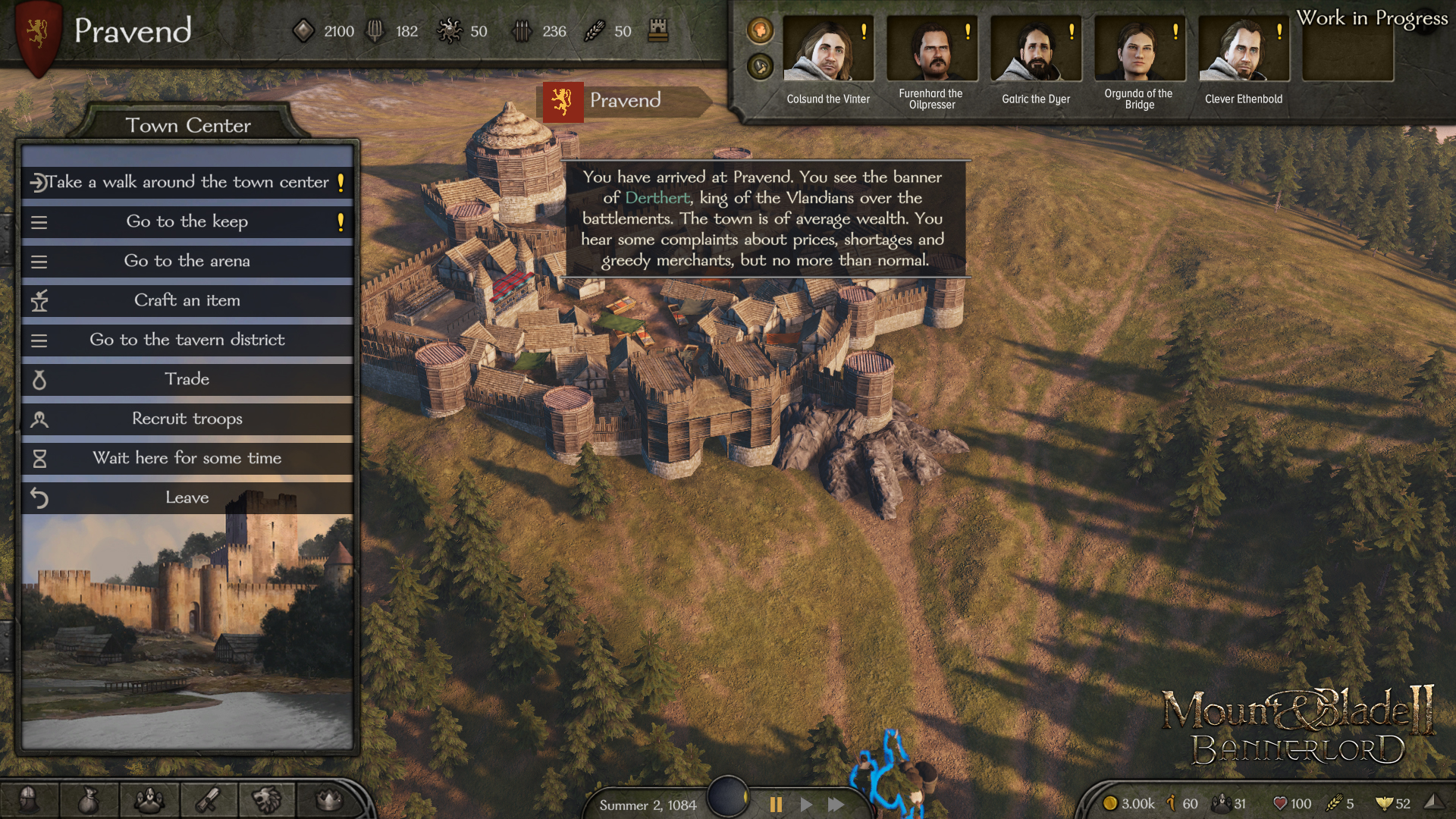 Sieges also play a big part in the design of a town scene. This comes both with technical and gameplay limitations, but also with opportunities! Small roads and buildings around town gates add variety to gameplay when the town is under siege, however, a shop that is filled to the brim with many intricate pieces of pottery would add performance complications. Our solution is to have a "siege state" for our scenes (which is easily achievable with our map editor). When a player deploys into a town that is under siege, they are greeted by deserted streets. The marketplace closes down, taking all of the colourful and fine goods with it, shops bar their doors and barricades are raised in the streets to help with defences.

This method not only helps us create immersion and ease the load on performance by removing elements that are unnecessary for a combat scene, but it also gives us more flexibility with our design. We can barricade off roads that are not related to siege gameplay to reduce overcomplexity or close shortcuts that might give an unnecessary advantage to either side while creating new choke points that would look out of place when there is no conflict.

Overall, we try to design our town scenes to be believable and immersive, but also to compliment gameplay. We want players to be easily able to navigate the world, either through their player character or through UI elements (such as menus), and experience the sandbox in the way that they want to. 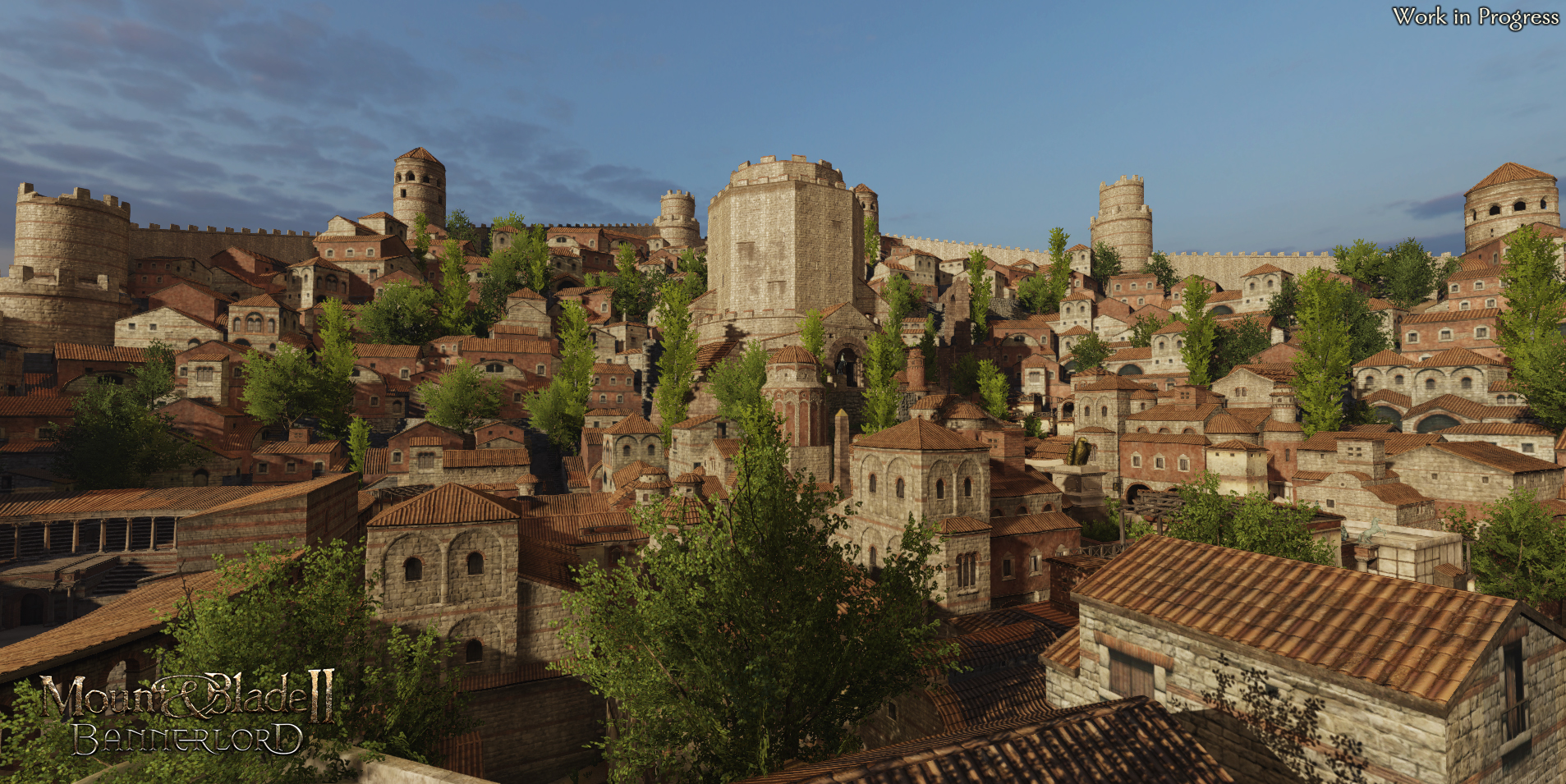 In next week’s blog, we will talk to Animator and Motion Capture Artist, Abdullah Nakipoğlu. If you have any questions you would like to ask him, please leave a reply in the comments section and we will pick one out for him to answer!

Join the conversation and comment on the forums! (134 comments)