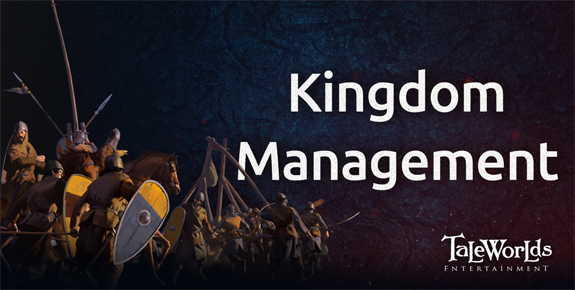 When you set out on your adventures in Mount & Blade games, you are just a humble traveller with only a sword and a horse to your name. As you progress through the game and establish a foothold in Calradia, you can pledge your sword to a faction and be welcomed into the fold of the nobility. Eventually, you will have the option of branching out and establishing your own kingdom, or, as is the case with Bannerlord, if you have taken a liking to your current one, you can subvert it and seize power for yourself! In this week’s blog, we discuss how players can interact with their fellow nobles after joining or establishing their own kingdom, looking specifically at the kingdom screen, which is an entirely new addition to the Mount & Blade series.

The main focus of Mount & Blade games revolves around the aforementioned journey from rags to riches. Almost every action you take in the game is done in the effort of increasing your wealth, prestige and ultimately, your power. However, in our previous games, there are parts of this journey which were somewhat overlooked during development.

In our previous games, managing and interacting with the lords of your realm is an arduous task that requires some level of patience. The information presented to the player can be hard to locate and the kinds of interactions available are rather limited in scope. This is something we wanted to address for Bannerlord, making the mid-late game a more fluid and enjoyable experience for players.

Our solution was to implement a screen dedicated entirely to this aspect of the game (along with some additional mechanics to expand upon the existing interactions available of course!). The Kingdom screen is split into four separate tabs: Clans, Fiefs, Policies and Armies. These tabs cover practically every piece of information that the player needs to make informed decisions and manage their kingdom effectively. The screen is still a work in progress and new elements are still being added, however, what we are showing you in this week’s blog is something close to what you can expect from the final game.

Clans
The Clans tab shows detailed information about every clan that is a member of the faction. This information includes the clan name, banner, influence, members and fiefs. In this screen, you can lend your support for one of the clans to become the leader of the faction or initiate a vote to have a clan expelled from the kingdom. 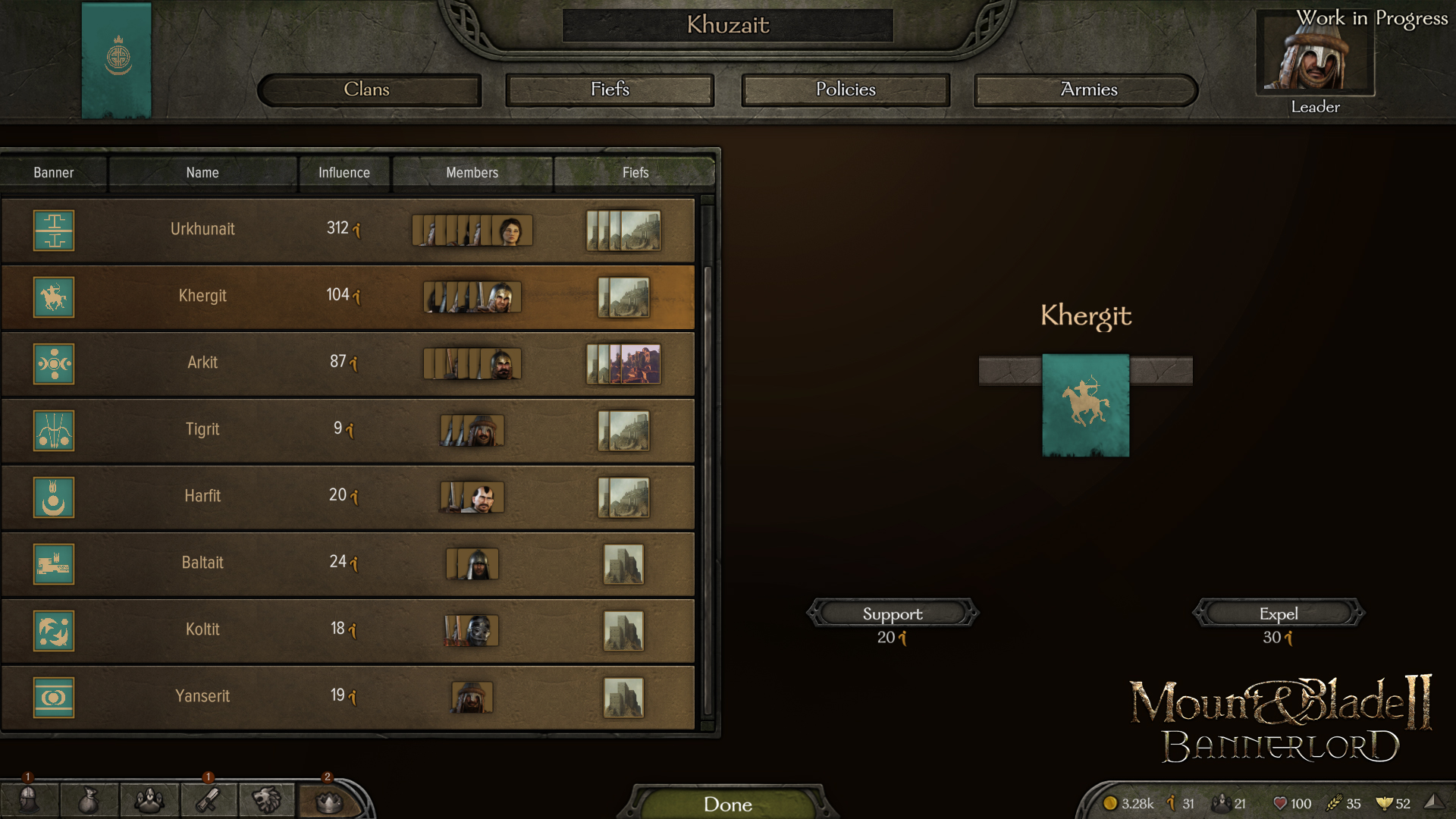 Fiefs
The Fiefs tab shows the towns, castles and villages which are under the control of the faction. There is also an option in this tab which lets you spend a large sum of influence to try and retract a fief from another lord. However, this is still subject to a vote from the other lords and the person on the receiving end of this action may not be too pleased with your meddling. If the vote is successful, then a second vote will begin to decide who will take control of the fief. 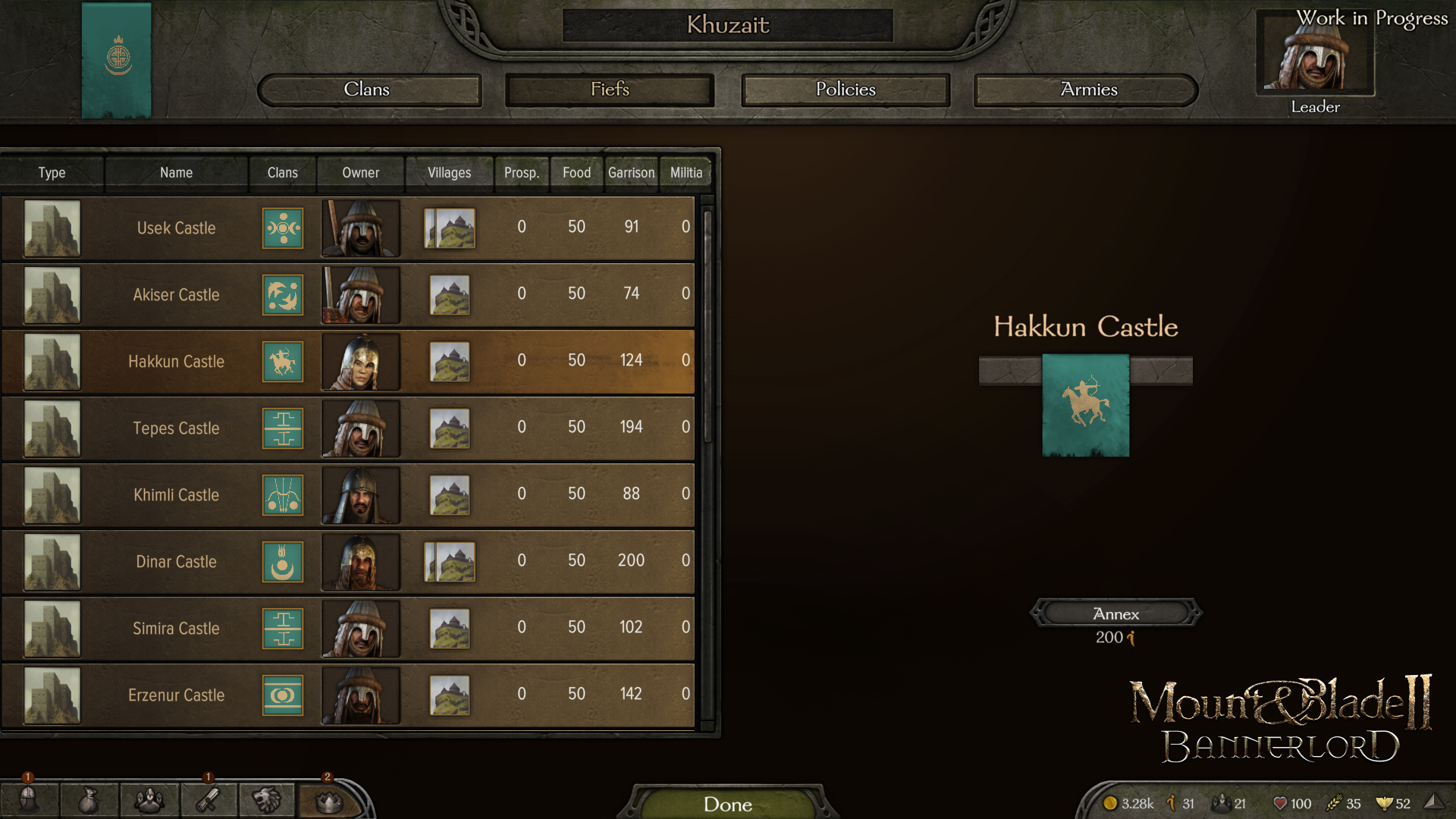 Policies
The Policies tab allows players to propose new policies or initiate a vote to repeal existing ones. Policies affect the entire kingdom and range from laws which give greater protections to vassals or transfer more power to the ruler. 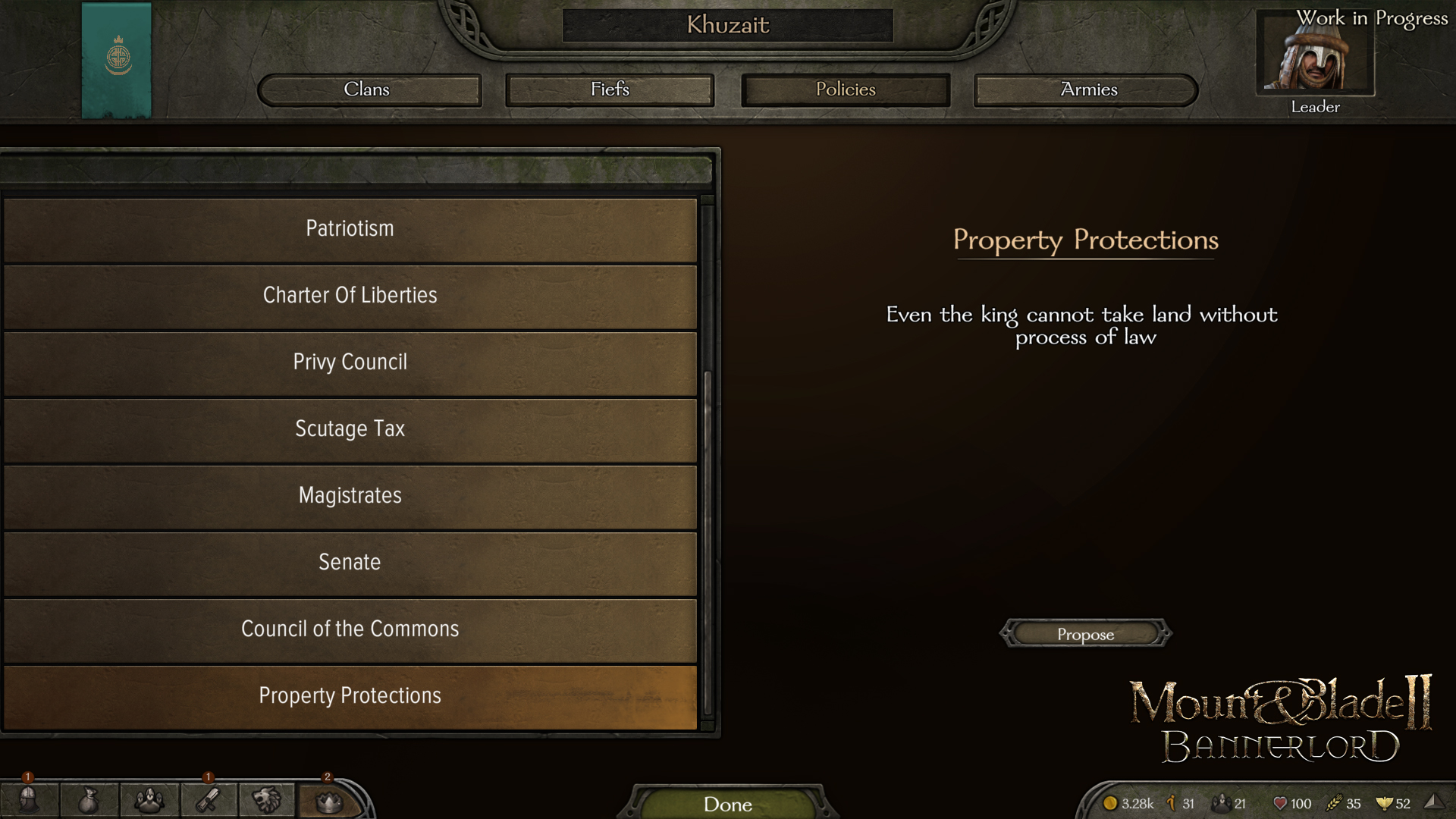 Armies
Finally, we have the Armies tab. This tab lets you create and manage different armies within your faction. The screen gives you a detailed breakdown of each army, including the lords that comprise the army, the strength and cohesion of the army, and the army’s current objective. Faction leaders are able to assign objectives to the armies through this tab, giving players greater control over the strategic aspects of warfare in the game. 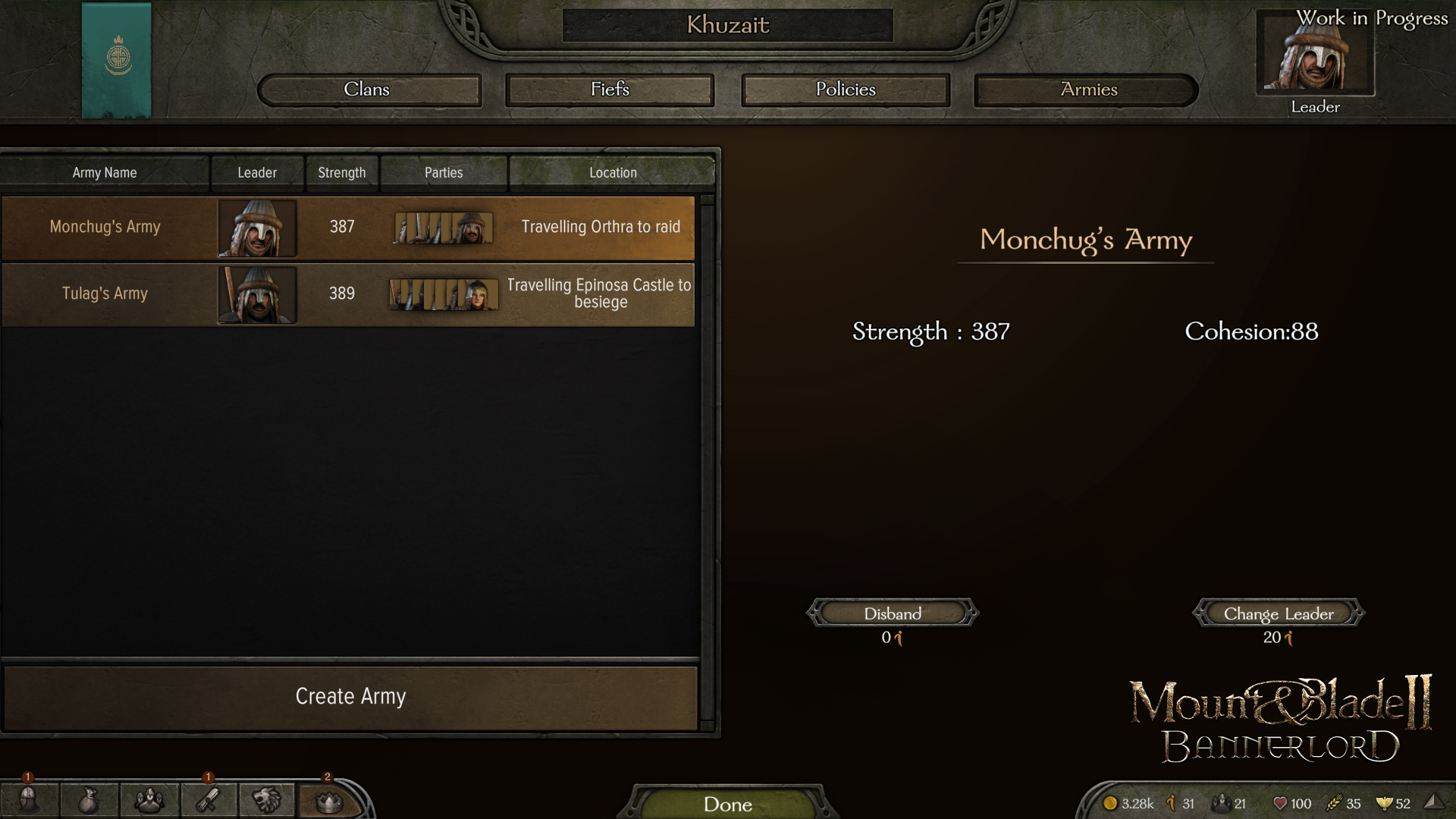 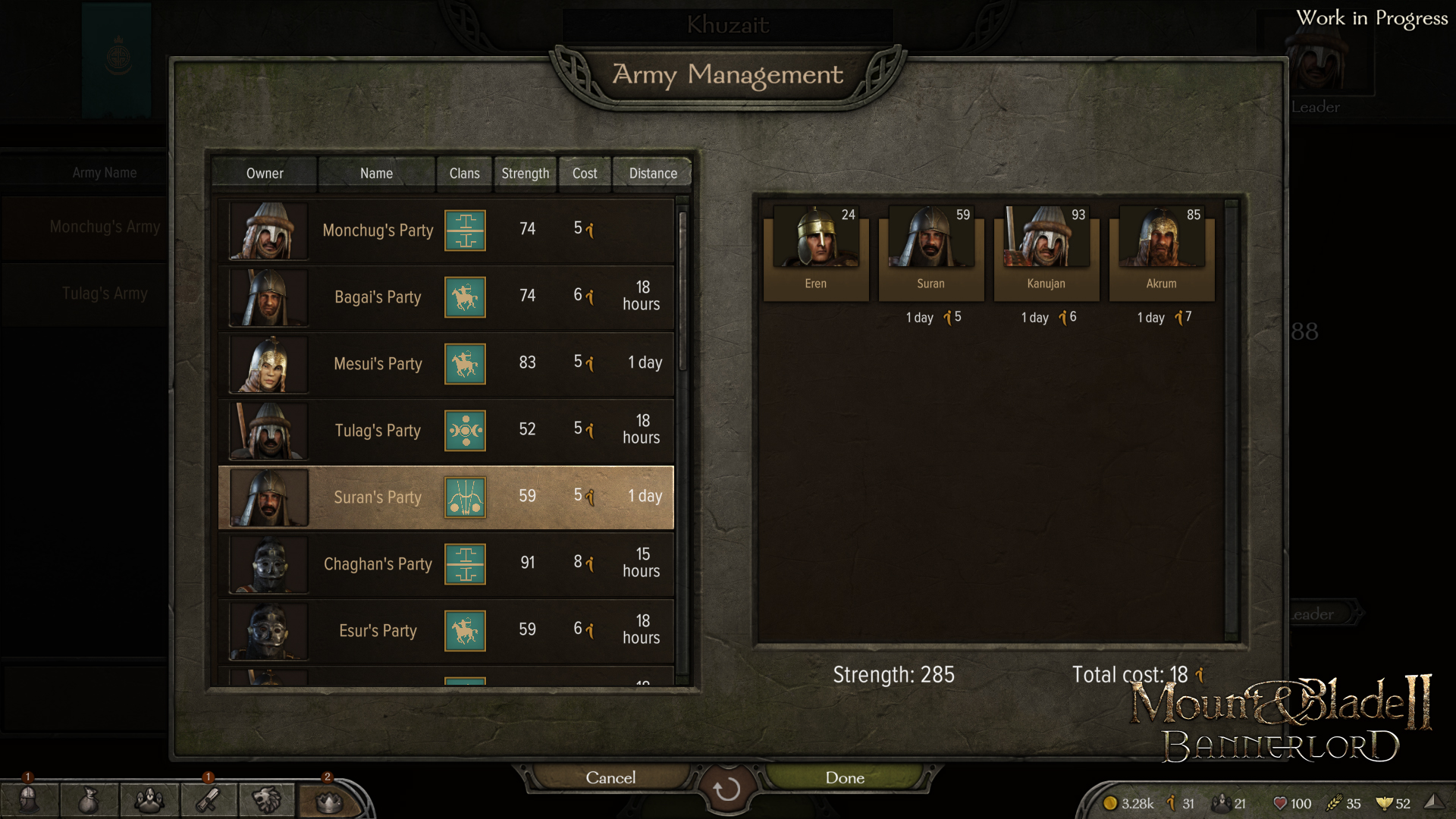 Overall, we think the Kingdom screen is a welcome new addition and helps to enhance the mid-late game experience for players. Information is presented in a much more streamlined and aesthetically pleasing way and the new additions of clans, policies and armies all come together to give a more accurate representation of an actual medieval kingdom, especially when it comes to internal power struggles.

Join the conversation and comment on the forums! (128 comments)