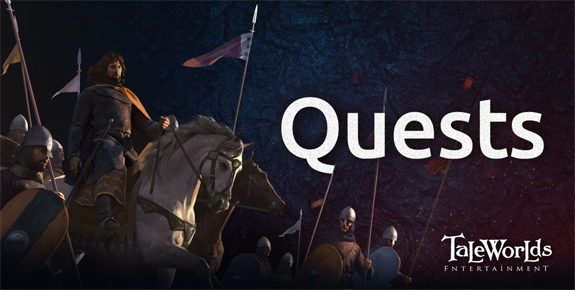 Mount & Blade II: Bannerlord is a huge sandbox that allows you to approach the game and play it in the way that you want to. This means that there isn’t a linear storyline that you have to follow. However, the game does present you with quests that offer you a way to fill your purse while improving your relations with the various notables located around Calradia.

Because the game is a sandbox, we design these quests to be short in length, enjoyable, but most importantly, repeatable. But that isn’t to say that your actions in these quests don’t impact on the game world: they most definitely do! In fact, many of the quests you will be offered are generated as a direct response to a situation that is currently happening in the game. If a group of bandits are prohibiting trade in an area and have established a hideout, then you might be asked to dispatch the bandits by a local notable. Clearing the bandit hideout won’t just net you a bit of extra spending money and positive relations with the person who issued the quest: trade will flow more freely in the area, which in turn will have a positive effect on the local economy.

So, while quests aren’t exactly considered to be a main feature of the game and can be safely ignored if they aren’t exactly your cup of tea, they do have a significant impact on the game world and can be used to your advantage in most situations. 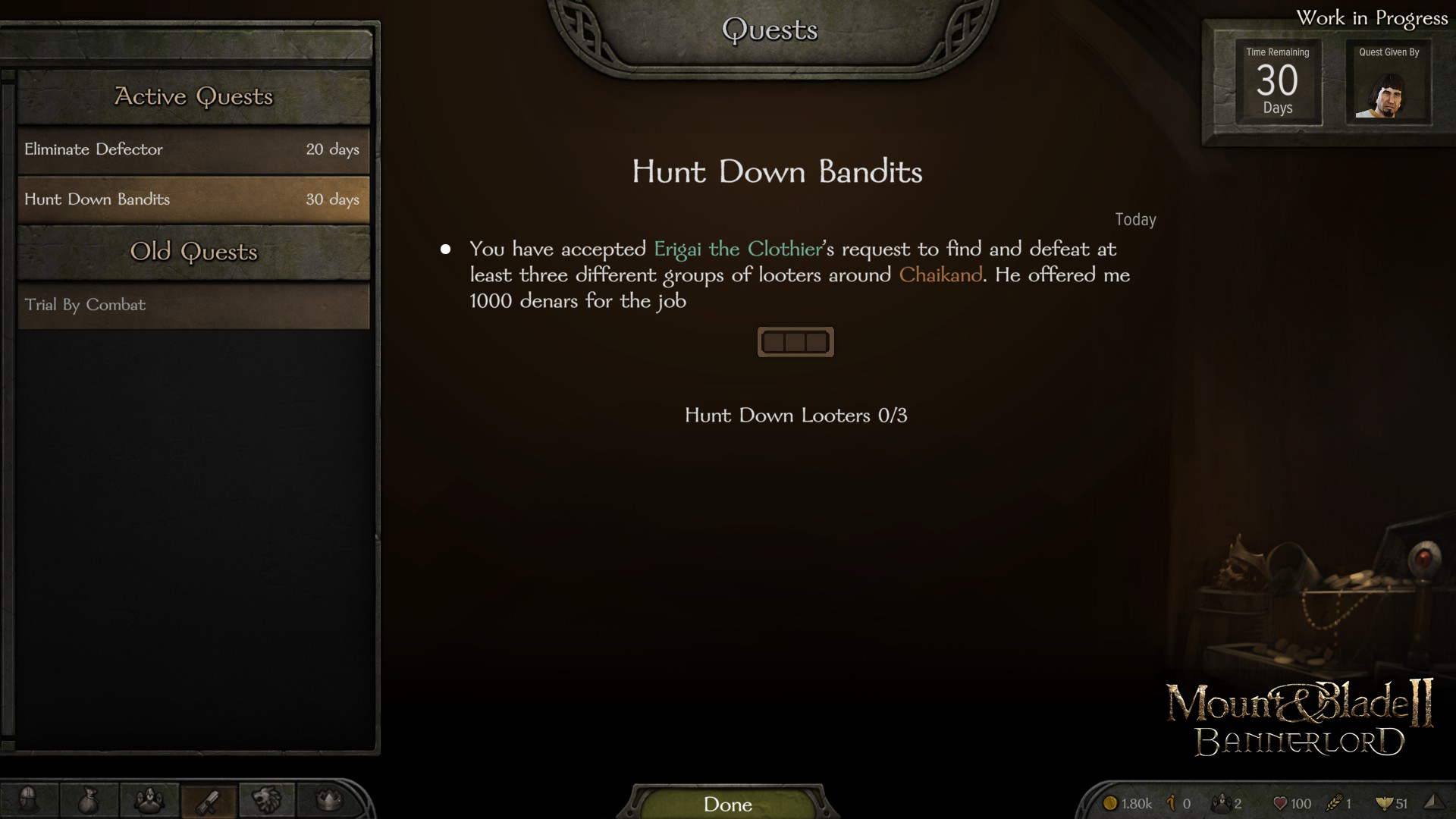 While developing Bannerlord, one of our primary goals was to present information to players in a clear and intuitive way. We want players to understand the game and experience what it has to offer without it being overbearing and without them having to memorise a manual. To do this, we decided to rework most of the existing screens from Warband (as well as introducing new ones of course!). The quest screen is one such screen that needed revisiting.

In Warband, quests were displayed and tracked through the Notes screen. The screen contained all of the information that the player required to complete the quest, but it was a little simplistic. With Bannerlord, we redesigned the screen to display this information in a clear way, using visual elements to help convey information to the player. Overall, we think the new design is easier to understand at first glance and we feel it is a vast improvement over the entirely text-based design of Warband’s Notes screen.

But, we didn’t just stop there. In Warband, finding a quest could be a quest in itself. You have to ride around the map speaking to different NPCs in the hopes that they have some work to offer you. With Bannerlord, we have added an exclamation point to portraits of characters that have a quest to offer you. There is also a special icon for designating portraits of characters that you need to interact with in the course of a quest. We think that such changes keep in line with our goal of presenting information to the player in a clear way, while also removing the tedium of trying to find a quest. 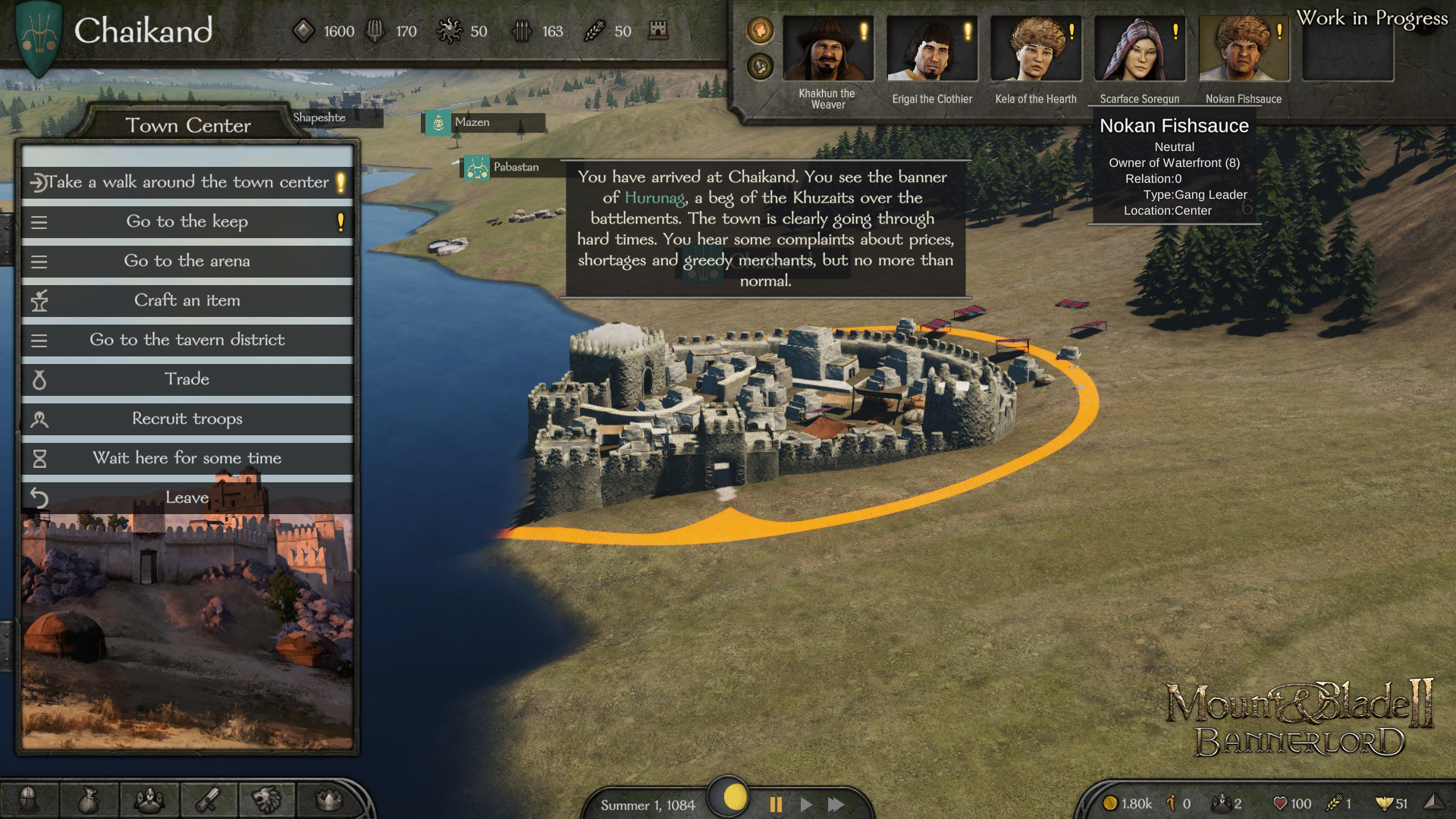 Overall, we think that little touches and changes like these will be more intuitive and user-friendly for new players while being a nice improvement to the game experience for returning players.


In next week’s blog, we will talk to UI Programmer, Emre Özdemir. If you have any questions you would like to ask him, please leave a reply in the comments section and we will pick one out for him to answer.