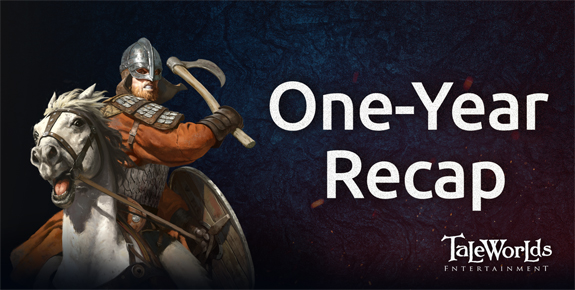 Today we reach a landmark: it’s been one year since we started this weekly dev blog. We wanted to be more available, open, and transparent, and as part of that new approach to our communication, we started these weekly updates to give you a sneak peek of what we are currently doing in the development of Mount & Blade II: Bannerlord, introduce you to the team that is making the game and tell you about our future plans and intentions…

Today we want to look at the path we’ve taken and sum up what has been a really exciting and intense year. To put it in a nutshell: we are incredibly grateful for your continued support all these months. Of course, we know isn’t possible to please everyone. Sometimes people said we were spoiling things and revealing too much, while at the same time others argued that we were playing smoke and mirrors and not telling enough about the game. For some people, a certain topic was boring, or repetitive, while at the same time others were super excited to read about it.

But even though we can't please everyone and we couldn’t talk about what all of you know want the most (and still can’t – yeah, sorry, there won’t be a release date in this post either!), thousands of people have read, commented, discussed, and shared every post, every week. We feel humbled: this is the best source of energy for a team of games developers -- to have a constant reminder of how much you care about Mount & Blade keeps us riding forward to develop the best game we possibly can.

In these months, we have published 50 posts that we could divide roughly into 4 categories: technical & development updates, lore, Q&As, and community announcements (such as this one or our posts about Gamescom). The whole series of posts explaining parts of the Mount & Blade II: Bannerlord lore were one of the most celebrated. We explained how the Calradian Empire split into several parts and introduced the Khuzait, Vlandians, Sturgians, Aserai, and Battanians. Our writer had a blast diving deeper into Calradia to introduce you to the different factions of the game.

There is another type of content that always stirs a lot of excitement: everything related to how modding will be in Bannerlord. We are aware that it is a really important part of the Mount & Blade experience, and we feel lucky to have such a talented and committed modding scene. Our Q&A with our modding community was one of the most commented and shared of all the posts, and every small piece of information about modding has been widely celebrated. We're happy to see that you like how we're approaching modding!

We've also talked with 19 people in our Q&As, all of them being directly related to the development of the game, from art to coding, through to AI, game design, level design and some more. Except for administrative roles, PR, and the janitor (who is a really nice guy, mind you), representatives from every department have come to share some details about their job and what they were doing for Bannerlord at the time. We know that some people thought this category of posts to be the less interesting, but there were always tasty snippets of information for those attentive enough to look for them -- and most of you did realise and read these Q&As very carefully.

There were other posts, with more technical stuff or describing a feature in particular of the game, that were usually very well received, like the one about inverse kinematics or siege engines. The post that got the most upvotes on Steam was one of these: the one about castle map design. And how could we forget our dear friend, Humphrey the Camel! Camels are not exactly good-humoured by nature, but Humphrey's one of a kind and enjoyed all of the memes. Keep'em coming!

As you can see, all in all, it's been a really intense year. We're happy to have opened this door to talk with you. Thanks a lot for reading, upvoting, commenting, and sharing all of these posts -- and thanks to those who helped us to improve with their opinions and constructive criticism. Great things are coming, and we're looking forward to walking this path with you. May fortune favour your blade, warriors.


As a side note: as you have possibly already seen by now, we just announced a new online tournament for Mount & Blade: Warband, brought to you by Bladecast_TV. After the success of the Battle of Bucharest last year, we wanted to do more to promote and grow the competitive scene of Mount & Blade. Right now, these efforts will be focused on Mount & Blade: Warband, but obviously we are also laying the foundations for the future competitive scene of Bannerlord. If you want to learn more, follow our new dedicated social media channels -- and of course, sign up for the tournament and test your prowess in battle against the best warriors in Europe!

Join the conversation and comment on the forums! (249 comments)