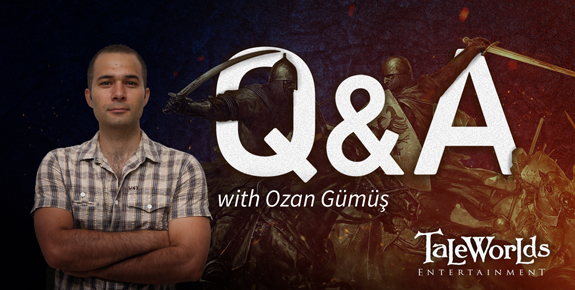 Before we dive into this week’s blog post, we would like to take this opportunity to introduce you to our new Steam Creator page. The Steam Creator page acts as a hub for all things TaleWorlds on Steam. Make sure to follow the page to ensure that you don’t miss out on any news or announcements regarding our company and our games!


Mount & Blade II: Bannerlord is a bit different from other sandbox games. There are some in which the story isn’t linear, so you can more or less play it in any order while you explore the world. In others, there is no such thing as a broad story that encompasses the whole game, or if there is, it is less important than the world itself and its inhabitants: you are free to roam to discover them. What we intended to do with the original Mount & Blade, and what we are working hard to do even bigger and better in Bannerlord, is to create a game where you get to create your own story from scratch, where you make your own decisions and live through the consequences. In this week’s entry of our dev blog, we talk with one of the people responsible for creating this magic: Campaign AI Programmer, Ozan Gümüş. If we think of Mount & Blade II: Bannerlord as a “box of tools” you can use to create and live your own story, he’s one of the people who help to create and shape those tools.


WHAT DO YOU NORMALLY DO DURING YOUR DAY?
“I can answer this question in two ways: what I do now, and what I did in the past. In the past, I was generally trying to build our living sandbox world, which is almost a simulation of the real world. There are wars, enemy and ally kingdoms, lords with different characteristics and other aspects which mirror the real-world Middle Ages... From time to time, new armies will gather and try to attack the weak points of their rivals, capture rival fiefs or raid enemy villages. At the same time, caravans are carrying goods from where they are cheap to where they are expensive, making profits for the owner of the caravan (who can be a well-known merchant in a town, or even the player themselves). Each village produces new raw materials each day and villagers carry these resources to connected towns. Each day, the residents of towns are consuming these resources and paying taxes. The collected taxes are then given to the clan which owns the fief. While villagers are carrying their goods to town, they are vulnerable to attack from bandit groups and they can be killed and their items stolen. Each night, new bandit groups are spawned around hideouts. This means that even bandits can damage the economy of a clan if they populate a hideout which is close to a village.

All of these elements come together to create the sandbox world and present players with activities and objectives to pass the time. Each game element is connected to other somehow and we try to make the world as realistic as possible to make players feel like a real lord in Calradia.

More recently, with the majority of the coding for the simulation already complete, most of my time is spent fixing bugs that are reported by our QA team.”

WHAT DO YOU LIKE THE MOST ABOUT BANNERLORD?
“In Bannerlord, the power of a kingdom doesn’t come from just its total manpower count, but also from the economic power of each clan within the faction. Through taking different actions, players and kingdoms can win wars just by restricting the income of their rivals. In Warband, this side of the game was quite weak when compared to Bannerlord because NPC lords never suffered from a shortage of funds. However, achieving this was quite difficult because we needed to create an economically balanced game world (the total amount of money in circulation shouldn’t increase too much over time).

In addition to this, fiefs can be developed through projects. We have lots of different projects which affect different things positively, and managing these issues helps to make the player feel like the lord of this fief.”

WHAT'S THE MOST DIFFICULT THING THAT YOU SOLVED SO FAR, DURING THE PRODUCTION OF BANNERLORD?
“The first rule for creating a realistic world for our game was to make NPC lord and kingdom armies make rational decisions. We had to ask ourselves questions such as: after one army has gathered and laid siege to a town, what should the besieged town’s faction do in response? The answer may seem quite easy, especially if their army is patrolling in the area, however, what happens if the army is involved in an offensive siege of its own? Should they abandon their siege to head home and defend their own lands?

When making these kinds of decisions a lot of factors come into play. Distance, army power, garrison size, nearby parties, other armies, the strategical importance of fiefs... Ideally, the most logical decision should be found by the AI and their army should do this. If parties give irrational decisions in critical moments like this then players will notice this and start to interrogate our game world. Also, if players find situations in which the AI cannot react to or solve cleverly then they could misuse it. For example, if raiding a village alerted all AI lords and most of them travelled to the village, then other parts of their kingdom would be exposed to attacks. Players would notice this and the end result would be that they would be forced into using this strategy every time, which would negatively affect their gameplay experience. Solving these kinds of issues and not leaving things open to abuse by the player is a difficult problem for us, but it is something we work hard to achieve.”

WHAT DO YOU CURRENTLY WORK ON?
“Currently, I am working on income and expense issues. In Bannerlord, clan wealth is mostly controlled by the clan leader, and all taxes are sent directly to them. However, the clan leader is also responsible for nearly all of the expense issues too (except for some minor personal expenses like recruiting troops and purchasing food). Each clan member is expected to deal with these minor expenses themselves, however, clan leaders can choose to gift money to their clan members. There are actually a lot of additional mechanics surrounding clans but it would be too much to explain right now!

My main area of responsibility is the simulation of the game world. The game is quite huge in scale and the simulation is open to many different kinds of bugs, many of which will only occur is certain combinations happen, so half of my time is dedicated to fixing these bugs. I actually prefer bug-fixing periods over implementing new things!”

WHAT FACTION DO YOU LIKE THE MOST IN BANNERLORD?
“I think Battania is so characteristic when compared to the other factions. Their architecture and equipment draw me closer to them. Also, their culture is more closely connected to wildlife, which I also like.”

MORALE IN BATTLES: WILL THERE BE A CHANCE FOR A BATTLE THAT DOES NOT END IN A TOTAL BLOODBATH ON EITHER SIDE?
“Party morale is a critical variable. It decreases massively if the leader does not pay wages regularly or if the soldiers cannot find food to eat. Leaders have two main responsibilities: wages and food. Other than this, travelling long distances without entering a town makes soldiers tired and decreases their morale. Some strategies, like leaving soldiers behind to run away from strong parties also make men unhappy. When you enter a battle with troops who have low morale, after taking some casualties your men can lose their courage and start to flee. This means that a battle can be lost even if most of your troops are still alive. These deserting troops go on to form a new deserted party on the campaign map which the party leader can no longer control. Thankfully, there are lots of different ways to keep party morale high!” 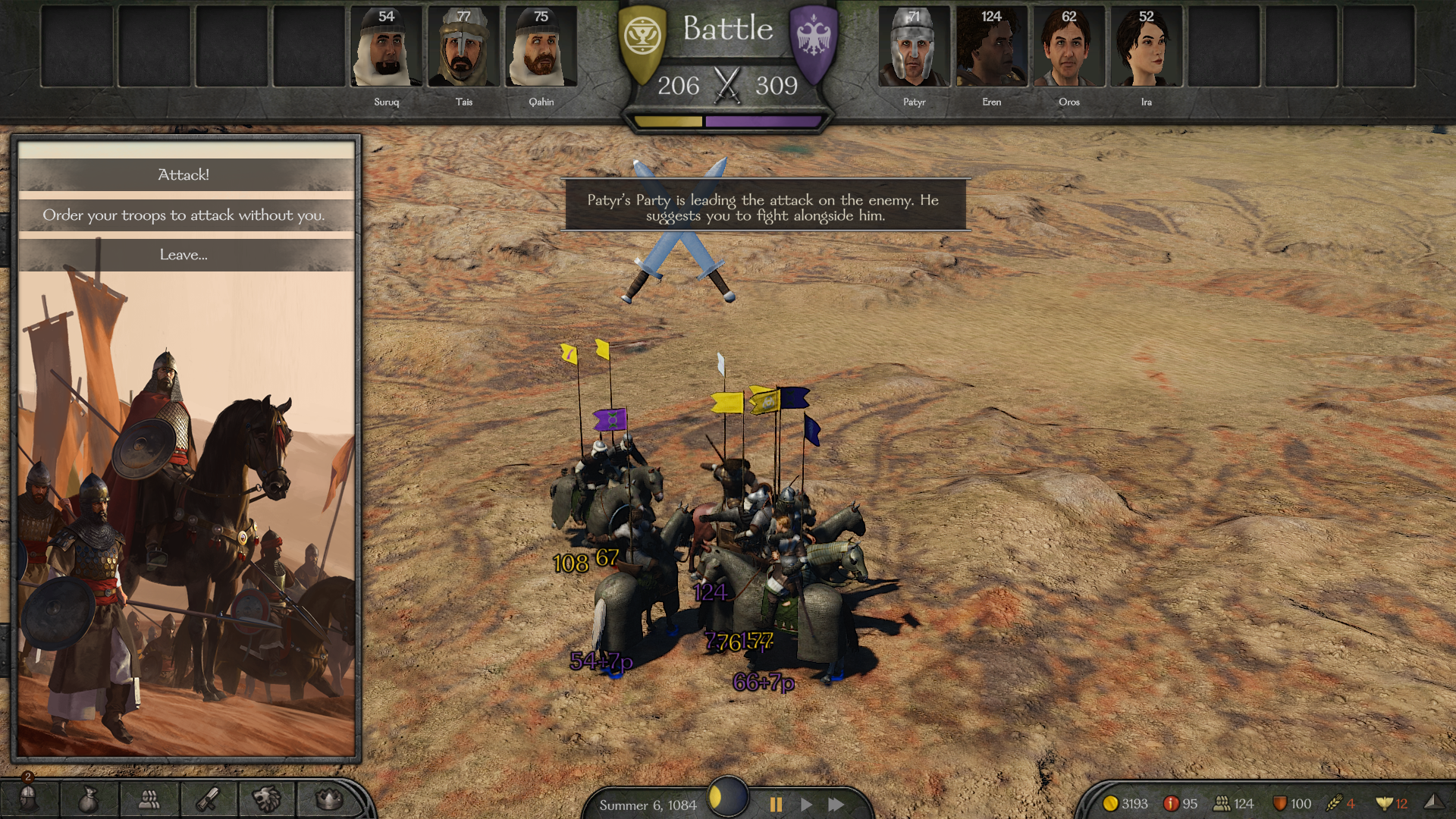 Join the conversation and comment on the forums! (163 comments)