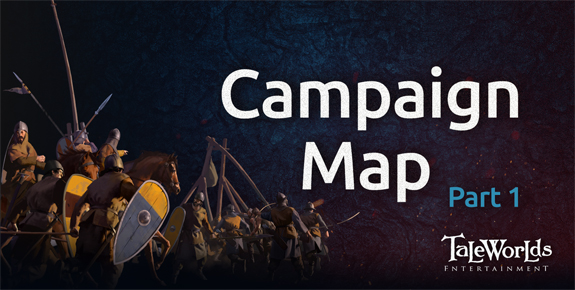 In Mount & Blade II: Bannerlord, whether you are trading goods or taking part in a military campaign, a large portion of your time will be spent traversing the campaign map. The campaign map acts as your portal to virtually every other aspect of the game: the diverse array of settlements, the huge and epic sieges, battles, trade, diplomacy, etc. In this week’s blog, we would like to show you some of the work we have been doing to improve this core feature of the game.

For Bannerlord, we are using a fantastic scene editor that our engine team created for our artists. We were, however, using a different method for the campaign map that was a relic of Warband’s system. This was practical in some aspects and had its advantages, but as time went on we realised that the limitations were too many and we decided to redo the campaign map system built on the new scene editor.

There are a lot of advantages to the new design. Apart from being able to create a map that is of a much higher quality, it is actually a huge change that opens up a ton of possibilities. By creating the map directly in our editor we are able to quickly and efficiently edit the map, with one of the key benefits being that we can now place settlements directly in the editor (rather than with coordinates in a text file!).

This leads us on to possibly the coolest change we have made with the campaign map: the city icons on the world map now visually represent the actual city scenes. This means that, given some time, seasoned players will be able to recognise a city just from its map icon alone. Likewise, players will be able to see what kind of resources a village produces and the level of a castle’s walls visually represented on the campaign map.

The new system requires a bit more work in certain areas. Making city icons that match the scenes is an additional task, and we also need a separate navigation mesh so that path-finding is fast and efficient for the many parties roaming the map. However, we think that the benefits justify the extra effort.

Finally, we would like to expand a little on what Gökçen told us in last week’s blog regarding terrain types. Designating areas of the campaign map with different terrain types allows us to do more than just match battle scenes to parts of the map, it also allows us to control AI behaviour (for example, limiting the areas where certain bandit parties can roam) and affect party modifiers (such as movement speed). We think that modders will find these terrain types to be quite useful as they can be used in a number of inventive ways.

In next week’s blog, we will be talking to 3D artist, Ömer Zeren. If you have any questions you would like to ask him, please leave a reply in the comment section and we will pick one out for him to answer.

Join the conversation and comment on the forums! (156 comments)