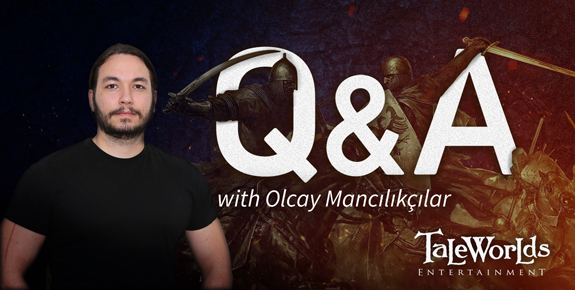 Animation is a complex and well-developed art with a long story, even longer than cinematography. Creating animations for a video game might look similar than doing it for a film or TV show, but it’s actually quite different – and much more complex. An animated character in a video game is not linear: it has to answer to the players’ feedback, be it because you should be able to direct its movement (if it’s the protagonist) or because it responds to your decisions (if it’s an NPC). Thus, on top of the artistic work, there is a technical side of things to make them look and feel natural, transitioning seamlessly from one animation to the next. And in a game such as Mount & Blade II: Bannerlord, where combat is so important, animation plays a key role in its gameplay: it gives you the visual feedback that you need in order to fight effectively, letting you know (in a subtle way) what your opponent is about to do. This is why Olcay’s work is so important, and today he will share with us some details about what he is doing for Bannerlord.

WHAT DO YOU NORMALLY DO DURING YOUR DAY?
“These days, I spend my time cleaning up the motion capture data which we recorded for our town and village NPC's. I make sure that all the animations look realistic, clear and blend well together with the other animations.”

WHAT DO YOU LIKE THE MOST ABOUT BANNERLORD?
“The most important thing that differentiates Bannerlord from other similar games is that it contains a large number of features. While you can be limited by what you can do in most medieval games, Bannerlord is like a combination of other games which contains lots of sandbox content. I also like the unique combat system of Bannerlord. It's really fun to play and hard to master.”

WHAT'S THE MOST DIFFICULT THING THAT YOU SOLVED SO FAR, DURING THE PRODUCTION OF BANNERLORD?
“It's definitely the two-handed animations. Actually making the animations was not the challenging part. What made it difficult was to adjust the animations for our combat system, which has lots of complicated features working together to give the players best Mount & Blade combat experience.

Another challenge was creating a dynamic rig and animations for our new mount, the camel. Our camel skeleton supports a dynamic neck and tail which helps us to create more realistic animations.”

WHAT DO YOU CURRENTLY WORK ON?
“Currently, I'm working on our new NPC animations. We are focused on animating different types of NPCs to create a living atmosphere in the game. This could be something as simple as seeing NPCs drinking and eating in a tavern or tending to crops in a village, but it goes a long way in making the world feel more alive.”

WHAT FACTION DO YOU LIKE THE MOST IN BANNERLORD?
“Khuzait, because of their horse archers (which I like to play most!).”

HOW DO ANIMATIONS IMPACT ON GAMEPLAY BALANCING?
“Since the animations are the visual result of the gameplay system, they are very important and have a large impact on balancing.

As you know, Mount & Blade has unique and responsive combat mechanics. Everything in our combat system depends on timing, speed and readability.

This is where the animations come into play. We make sure that every attack can be read by the player and their opponent. We do a lot of playtests and adjust each of the animations to increase the visibility of each attack.”

WILL MODDERS BE ABLE TO USE SKELETONS AND ANIMATIONS THAT USE A DIFFERENT AMOUNT OF BONES THAN THE HUMAN OR HORSE SKELETONS?
“Yes, they will definitely be able to use different types of skeletons! For example, our new camel mount has a brand new skeleton and animations which we easily added to our engine.

We try to make sure that modders will be able to add any type of skeletons and creatures to our engine without having any issues.”

In next week’s blog we will be talking to Level Designer, Gökçen “Cuce” Karaağaç. If you have any questions you would like to ask him, please leave a reply in the comments and we will pick one out for him to answer.

Join the conversation and comment on the forums! (135 comments)