Happy Friday to avid readers and passers by. It has been a little while since our last Bannerlord Blog. In this entry we are once more decreasing the number of unblogged rooms in the office by one. Although some animations are made and polished in various parts of the office, many are captured in our very own motion capture studio near the main door of our offices. The animation hub and thus the associated blog room for this episode. 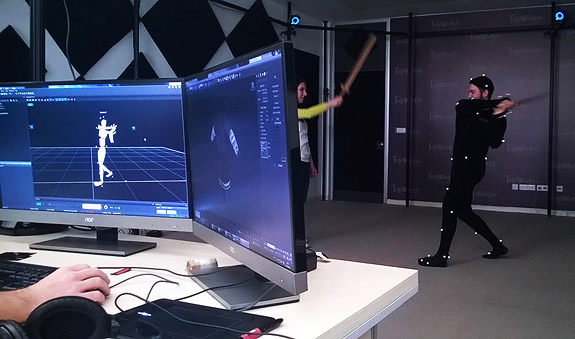 The movements that characters and animals (neigh!) make in the game all have to be defined by animations. In most games, these animations have one requirement, which is to look good. In this sense, good normally means realistic, or at the very least, believable. If you don't notice anything weird, then the animations are normally pretty decent. Naturally, Mount&Blade also has that requirement, but on top of that, due to the mounted and melee combat systems, many of the animations are also inherently linked to gameplay. All of our hits are calculated precisely, so if, for example, a sword swing animation shifts the shoulder forward an inch, then swords will have an inch more range, (which will have an effect on the calculation). That is obviously something that will affect gameplay directly and requires extra care, as well as constant reworking, in order to get right. This isn't a factor that comes into play when making animations for firing guns or combat systems that don't use physics based hit detection.

We have largely aesthetic animations too, even in combat. The animation for reloading a crossbow isn't going to have a dramatic effect on gameplay - perhaps how low the character bends will affect what obstacles cover them while reloading. The speed of the animation is obviously a factor there but can easily be changed by swapping a few numbers around. What is crucial is that it looks like an actual crossbow being reloaded so that when you see it in the game, you hardly notice it. If, instead, it looks more like the character's bones are made of jelly and they are trying to eat the dirt on the ground, then it will probably have a negative effect on your experience when playing the game - after some initial amusement. 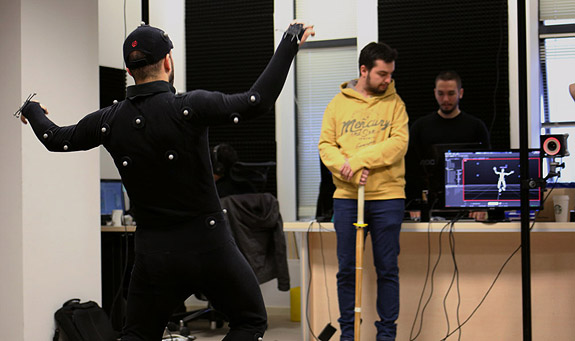 To make these animations we use our motion capture studio as much as possible. The process of motion capture basically involves putting on a rather silly looking suit with little white bobbles ("markers", for the tech-head) on it and making the desired movements in the middle of a host of special cameras (18 in our set up). The cameras track the white bobbles and record the way they move into a computer file. Making animations with motion capture saves a lot of time and painstaking work moving the bones and joints of the virtual skeleton (this is more like a human-ish stick man than an undead in a fantasy game). Simply capturing this in realtime saves a lot of this work, perhaps leaving only some cleaning before the animation is ready for the game. It is also likely to produce a more realistic result as motion capture picks up on more subtle natural movements that are harder to recreate by hand. It is especially useful for idle animations (standing or sitting doing nothing!).

Certain animations are more difficult to capture in our studio. For example our horses are animated by hand since, while it is possible to motion capture a horse, bringing it into the studio as an unexpected variable would disturb our more nervous programmers. Also motion capturing a horse in combat might present some animal rights issues. Charging a horse into a wall would have to be done by hand in any case. 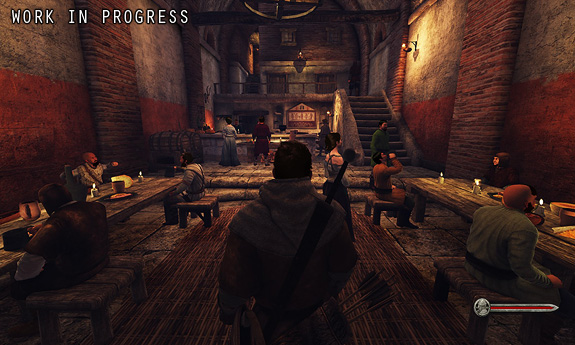 As you can see in the screenshot, the taverns in Bannerlord already have a lot more atmosphere than those in Warband. People are sitting, drinking, stretching and talking just like a real medieval tavern. Though this is still a work in progress and some way from where we want them to be. Our animators are constantly working on making Calradia come to life in order to give the player a vivid game experience while paying attention to detail and life-like movements.

Join the conversation and comment on the forums! (723 comments)