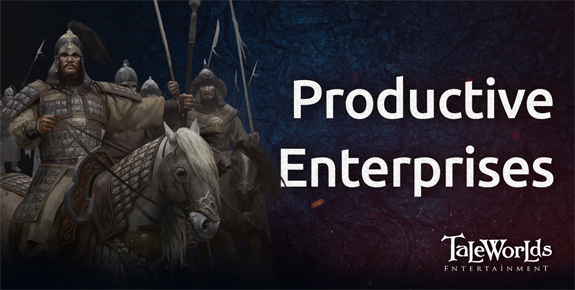 The ultimate goal for most players of Bannerlord will be to carve out their own piece of Calradia through bloody conquest, however, Mount & Blade games are about more than just raising an army and leading it into battle. A big part of the game revolves around plotting your rise to power and building up a war chest that is capable of making your ambitions a reality. In this week’s blog, we will take a look at one of the ways that Bannerlord’s deep economic system enables players to raise the funds needed to equip themselves, gather an army and set forth on a military campaign: productive enterprises.

For those of you that have played previous Mount & Blade games, you will already be familiar with productive enterprises, but for those who are new to the series, allow us to give you an overview of what they are and how they work. Productive enterprises are business which players can set up in towns across Calradia. They provide a way for players to earn a steady income by taking the raw materials created in villages and producing crafted products to sell to merchants. As with real-world economics, prices fluctuate according to supply and demand, so a good knowledge of the supply chain is essential if you want to maximise your profits or prevent your business from grinding to a halt.

There are a number of different productive enterprises in Bannerlord, which are:

One of the key changes that we made from Warband is that productive enterprises are now linked to physical locations in each town. Players can enter a town and walk around to find their preferred location for their business from a number of different rentable buildings. Not only does this help us to achieve our aim of improving the overall immersion of the game, but it allows us to expand on productive enterprises as a gameplay mechanic as a whole.

Having various locations for productive enterprises in each town means that players and AI lords can establish multiple businesses, which actually has a wider implication than it may seem at first glance. By allowing both players and AI lords set up multiple businesses in a single town, they can act in direct competition with each other and have a negative impact on each other's profits. This can be quite useful if you already have a reliable source of income and you want to ensure that a rival lord doesn’t gain a financial upper hand, but it can be quite a nuisance if you are struggling to make ends meet and production is halted because your business can no longer turn a profit. Likewise, crafty players can monitor what businesses their rivals own and buy up any raw materials or flood the local market with crafted goods to influence market prices, effectively putting a choke hold on rival operations.

As a side note, expanding this feature of the game was actually quite a big task. We had to create a huge number of interior scenes to match the architecture of each different region of the world map and then decorate these scenes to match each productive enterprise. To decorate the interiors, we used a system that allows us to tag objects and automatically replace the default entities placed in a scene using the properties of a new shop. In Warband, the simplest way to do this would have been to create a new scene for each shop, but we think that the current method we are using for Bannerlord is a much more elegant and practical solution (and we are sure that modders will find some inventive uses for it).

And finally: In the past few weeks, some people have asked us if we plan to attend the next E3. After careful consideration, we have decided against it, and we won’t be going to Los Angeles this year. The preparations needed to attend an event such as E3 takes a lot of time, effort and resources, and right now we think it is better to focus on the development of the game. However, that does not mean that you won’t see anything of Mount & Blade II: Bannerlord during the summer: Gamescom is on the horizon!

Join the conversation and comment on the forums! (249 comments)