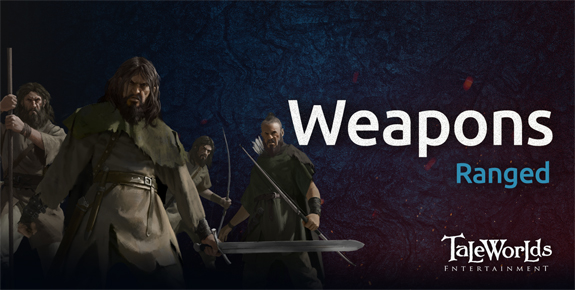 In this week’s blog, we would like to wrap-up our overview of the various weapons which you will have at your disposal in Bannerlord by introducing you to the selection of ranged weapons which the game has to offer.

The ability to strike your opponent from a safe distance with little or no chance of retaliation puts you at a great advantage on the battlefield. Not only can you pick away at the enemy and thin their ranks, but you can force them into making an unfavourable move which can be used to your advantage. The brutal effectiveness of a range advantage in medieval warfare can be seen from famous battles such as Agincourt or Towton, where English longbowmen harassed their enemies and forced them into making costly mistakes which ultimately led to crushing defeats.

Naturally, some of these advantages carry over into the game, however, we had to make certain choices and design decisions to ensure that ranged classes are both fun to play and to play against (gameplay should always trump realism!). So what do we mean by this? Well, from a realism standpoint, we know that some people would like (or even expect) to see arrows and bolts bouncing off thick armour and helmets (after all, armour was designed in such a way as to protect the wearer by deflecting incoming ranged and melee attacks). However, we think that this simply isn’t fun for anyone playing as a ranged unit, and by making them less effective in this way it really narrows down the variety of unit choice in both singleplayer and multiplayer. Instead, we provide players with other counters to ranged classes in the form of shields and good footwork.

Throwing knives are perhaps the least likely weapon to be seen on a medieval battlefield (if at all!). They are light, inaccurate and ultimately they don’t have much stopping power. However, we decided to include them because they are fun and because they are great for finishing off severely weakened opponents. Knives can be toggled into melee mode, meaning you can trick your opponents by switching between ranged and melee, however you should be careful when engaging in hand-to-hand combat as they are unable to block incoming attacks.

Unlike throwing knives, throwing axes actually have some weight behind them (enough to penetrate skin, muscle and bone!). Axes like the Francisca were designed specifically for throwing and as such, some of our smaller throwing axes lack the ability to be toggled into a melee mode. Throwing axes are fast, deadly, and quite good at taking down shields. However, they can be quite inaccurate so you should be careful when throwing them near your own troops!

Javelins are perhaps the most famous throwing weapon on this list and you can expect to see a wide variety of them in the game. They are heavy and slow, but they are extremely deadly and great for destroying shields. They can be used in both ranged and melee modes, and (as with most of our throwing weapons) they can be crafted in our weapon editor. Some of the factions, such as Empire, have their own dedicated skirmisher units, and in the case of Aserai they combine the accuracy and power of these ranged weapons with the speed and mobility of their camel mounts. (Oh, and if someone wants to make a Jereed mod at some point in the future, that would be pretty awesome!)

We have a number of different types of bows which players can equip in Bannerlord. Shortbows, longbows and recurve bows are all available, each with their own slight differences. Longbows and recurve bows have a higher projectile speed but they suffer from a slower reload time, whereas shortbows have a slightly higher rate of fire but pack less of a punch. Warband veterans will also notice that our bows now have a two part animation. Your character will always attempt to nock an arrow immediately, rather than only attempting to reload when you want to fire an arrow. Some of our factions make use of mounted archers (Khuzait in particular) and we are giving careful thought and consideration into balancing them with this the rest of our units, (which, admittedly, is something we didn’t quite achieve with Warband).

Historically, crossbows required much less training to be used effectively than traditional bows. A few weeks of training were enough to turn a peasant into a competent crossbowmen, while becoming a decent archer can take years. Energy is stored directly in the limbs of the weapon taking the burden away from the crossbowman, giving them a better chance to aim at their target. In Bannerlord, crossbows are just as deadly as they were historically. They are accurate and powerful, but take a long time to load (exposing the crossbowman during this period). However, a savvy crossbow user will look for cover while reloading and only reveal themselves when they are ready to fire.

And finally we have the one ranged weapon you have all been waiting for. The go-to choice for peasants and football hooligans alike, the small and humble rock. They are about as effective as a lump of frozen butter but don’t be fooled into thinking they are totally harmless!

Join the conversation and comment on the forums! (205 comments)