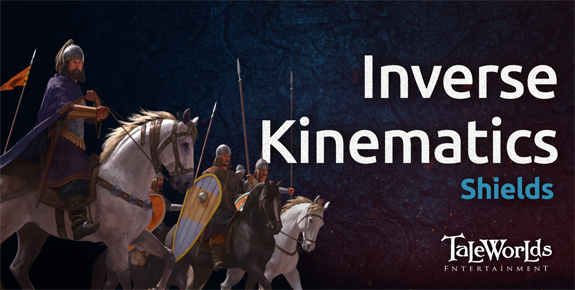 In our efforts to make Mount & Blade II: Bannerlord a visceral experience, we are constantly looking at different types of systems which will elicit an emotive response from players. By aiming for a certain level of realism, it becomes easier to make a game more relatable and immersive for players. However, striking the balance between realism and gameplay is a tricky subject, and we are firm believers that gameplay should always trump realism. Thankfully, there are other methods that we can use to draw players into the game and offer players a more realistic experience, without detracting from the gameplay. In this week’s blog, we would like to show you how we make use of inverse kinematics to make strikes in combat feel a bit more immersive.

What happens when you block an attack or an arrow with your shield? In real life, you get the obvious positive result of not having your arm chopped or a lung pierced, but you would still feel the force of the impact. Previously, we would show this through a standard animation which would play, regardless of where your shield was hit. This provided some visual feedback to players when they blocked an attack, but ultimately it wasn’t to the level of immersion that we are trying to achieve for combat in Bannerlord.

To improve on this, we implemented an inverse kinematics system for shields so that they react differently depending on the direction of the impact. For instance, if your shield gets hit on the left side by a weapon or an arrow, both the shield and arm will absorb the impact and bounce back on that side. The system takes into consideration the force of the impact, meaning that the visual feedback from a cleaner strike or a heavier weapon will be more prominent.

When combined with the stagger animation of the body, this new system provides a greater level of feedback to players and helps to make combat feel more immersive and engaging. And while minor details like this may not exactly be game-changing, it helps to add to the overall feeling of realism in our game, which is important to us because our combat system isn’t simply about mashing buttons. So watch your shield, because losing that nice head you have on your shoulders will surely ruin your day.

Join the conversation and comment on the forums! (142 comments)