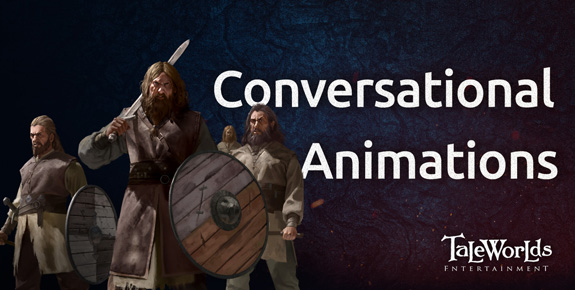 In this week’s blog we would like to introduce you to an improvement we have made to the dialogue system in Bannerlord: conversational animations.

Personalities play a large role in the politics of Calradia; some lords may approve of your course of action while others may find it to be distasteful. Forcing the player to make conscious choices based on this creates an additional layer in the strategy aspect of the campaign and adds overall depth to the roleplay element of our games. Discerning between those who will offer support in times of need and those who are likely to cause issues is a relatively subtle part of our games, but those who pay close attention to their relationships and plan accordingly will often have an easier time when plotting their rise to power.

Developing relationships with NPCs was, and still is, quite straightforward: complete a mission for them and they like you more, support their claim and they like you more... However, it was often hard to form any sort of emotional bond to these static and lifeless characters, and ultimately, conversations with NPCs always ended up feeling a little bland. In previous Mount & Blade games, your standing with a lord was shown through an information window which could be viewed during conversations, and, while this worked as a clear and simple way of presenting information to the player, it is something we feel had room for improvement.

In Bannerlord, we want players to feel immersed in the world and to become attached to (or despise) the different characters they will meet on their travels. We decided that one way we could achieve this would be to make a small addition to the conversation system to inject some personality into the characters.

In Bannerlord, an NPC’s behaviour is heavily influenced by their personality traits, but it is still somewhat dynamic in that it can be affected by their current circumstances. We developed a simple system which sets animations to the characters you are talking to based on their personality (among other things). To do this, the game looks at the NPC's personality traits, some situational parameters and aspects of the NPC's relation to the player to choose appropriate dialogue animations. It isn’t anything too fancy, and it doesn’t include any lip syncing or voice acting, however, we feel that it helps to make the world feel more alive.

To give you an example of how this works:
Here is a character (let's call him Yaga), who is unimpressed that you were unable to complete a quest he gave you.

Here is Yaga again, but after you have successfully completed his quest.

Just as with much of the rest of the game, we designed the system to be as moddable as possible. Animations are initiated directly from the dialogue, so modders will be able to easily override the animations used in existing dialogues and use existing animations for any conversations they create. It will also be possible for them to add their own animations to the system which we think opens up a lot of fun possibilities!

We feel that this small addition will help to make the world feel more immersive and add some extra character to the various NPCs that populate Calradia. It is only a minor change, but it is something that works for our style of game and we are sure that the modding community will find some inventive uses for it!


In next week’s blog we will be speaking with Graphic Artist, Özgür Saral. Özgür is the lead of our art team and oversees all of the visual aspects of the game. If you have any questions you would like to ask him, please leave a reply in the comments and we'll pick one out for him to answer.

Join the conversation and comment on the forums! (219 comments)