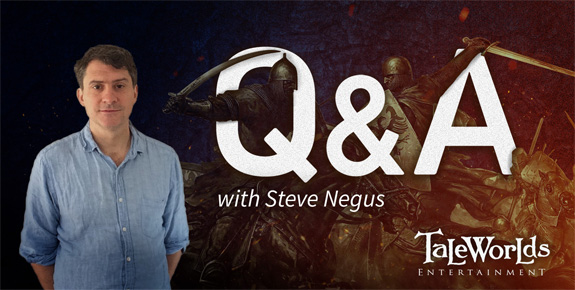 Mount & Blade is RPG, strategy, epic battles... and it's also a unique world which acts as the perfect framework for your own adventures and heroic deeds. Calradia, the continent where Mount & Blade takes place, is a low-fantasy setting deeply rooted in history: its past and factions are inspired by real kingdoms and conflicts of old, but it also adds its own doses of imagination. It's a delicate balance: you have to combine creativity and imagination with thorough research and interpretation of historical sources. The result, however, is worth all the efforts: Calradia may be a fictional place, but it feels as alive and real as our world. It takes a lot of talent and hard work to create such a place, and today we want to introduce you to a member of our team who plays an essential role in its creation: our writer and designer Steve Negus.

EDUCATION
Political science. My main professional experience has been as a journalist, working in Egypt, Iraq and other Arab countries.

HOW DID YOU GET INVOLVED?
“In Iraq in 2006, where you couldn't go out except with a lot of precautions, I had a fair amount of time on my hands after work. I did a mod about the wars for Sicily in the 11th century. I'd wanted to experiment with dynamic low-intensity warfare, like raids and patrols. Armagan called me out of the blue and asked me to work for Taleworlds. Game design has been a passion of mine, ever since I was a little kid playing hex-and-dice wargames. If a genie had given me a wish in 1978 about what I wished the future could provide, I probably would have wished for something like Mount and Blade. I also loved being a journalist, but eventually that became more difficult with a family and with my wife pursuing a career in academia. So working on Bannerlord is really kind of a dream come true.

There is a fair amount of overlap between journalism and game design. Many of the conflicts I've covered resemble medieval wars, in that there's no chain of command that everyone follows. Barons and insurgent chiefs have a thousand believable excuses for not showing up at a muster point for a big offensive if they don't want to. If they do show, it's probably because they want to further their reputation, and improve their position vis-a-vis each other, as much as they want to defeat the enemy. Mao's dictum that politics comes out of the barrel of a gun is well-known but, out of its context, doesn't say much. Politics is very often the art of cajoling, pressuring or inspiring people to point their gun in the direction that you want. In a feudal or tribal society this is doubly so.”

WHAT DO YOU LIKE THE MOST ABOUT BANNERLORD?
“I like the low fantasy medieval setting. I love reading history, but I don't have that much of an interest in simulating a specific historical event. It's fun to read history looking for personalities or organizations that can be fit into the M&B world in some way.

I like the mix of RPG and strategy. RPGs really drag you in. You can wade into the landscape, the towns, the villages and of course the battles. But most RPGs are variations on a simple theme. Evil person does an evil thing and is punished for it. The hero may have some painful choices along the way about what collateral damage he or she does, but in the end fiction and fantasy often seem like a morality fable. Even in Game of Thrones, where goodness is punished and evil rewarded, there's still an author making a choice.

It's one of the deepest human contradictions, that we want to live in a world where a happy ending is guaranteed, but we also want our free will to matter. I think morality matters - it's a kind of force multiplier, to use the military expression, in politics and war. If a leader can pull off being good, which isn't easy, it helps but does not guarantee anything. You can try to be one of those leaders remembered as both virtuous and wise, like Pericles or Marcus Aurelius, and still have your efforts brought to naught by fortune.

In Bannerlord, there are about five types of morality that you can try to hue to - reciprocal loyalty to friends and kin, sticking to your word, courage and willingness to sacrifice for a cause, compassion toward those who suffer, and long-term utilitarian calculation - and they'll sometimes be in conflict. I think games can offer some unique perspectives on history, not simulating events or predicting new events but simply highlighting variables, and I hope this is what we can do.”

WHAT DO YOU NORMALLY DO DURING YOUR DAY?
“I'm working from California, not Turkey, so my day is less structured than much of the rest of the team. I consult with Armagan twice a week and then write dialogs, code or development documents as the need arises.”

WHAT'S THE MOST DIFFICULT THING THAT YOU SOLVED SO FAR?
“The game is not out and I don't know if we've solved this problem, but one of the big challenges is to have events that are generated by dynamic sandbox events, and are good strategies for the NPCs to adopt, but that also make sense to the player. An example of what we want to avoid, from Warband: we introduced feasts, which were a way that factions could spend resources to repair relations between lords that were damaged by the ebb and flow of war. The problem, though, was that the strategically ideal time to hold a feast was when you were in the middle of a war, which didn't seem right from a narrative perspective. So there are a lot of moving parts in the game, and we're trying to get them to work together in a way that makes sense from both a strategy and an RPG perspective.”

WHAT DO YOU CURRENTLY WORK ON?
“I'm currently working on dialogs for quests. These can get quite complicated, because we want to have lots of small quests that offer meaningful branching choices but may also be given out by characters with different personalities. We're also trying to work out a main storyline quest that absorbs the player but complements the sandbox struggle for power rather than seeming like two parallel games.”

WHAT FACTION DO YOU LIKE THE MOST IN BANNERLORD?
“Aesthetically I love the Aserai, the cities and the deserts - that's partially why I chose to live in the Middle East - but I'm actually most excited about the Empire. It's based on the Byzantines but for its politics we've drawn a lot from the classical political legacy. The Greeks and Romans didn't really have ideologies, but they recognized certain styles or postures that leaders could strike. Populists/democrats had a passion for justice but could easily fall into mob groupthink. Oligarchs brought experience and stability but tended to confuse their class interests with those of the state. Monarchs brought a certain unity of purpose to a city-state but tended to be arbitrary and tyrannical. These weren't fixed, and leaders could switch or mix stances as the need arose.

Today most people believe in elections and the universal franchise and are thus what the ancients would probably consider very radical democrats, but there's a lot of debate about the kind of leaders we want, and I think we'll see the same assumptions and stances, the same trade-off of justice, stability and unity that the ancients dealt with. Bannerlord is absolutely NOT going to be an analogy for the present, the characters are all inspired by historical leaders rather than modern ones, but I think you may find the echoes to be interesting.”

DO COMPANIONS/HEROES HAVE AN EVEN MORE IN-DEPTH PERSONAL BACKGROUND THAN IN WARBAND?
“In Warband, we concentrated a lot of the elements of a traditional role-playing game into the companion system - they told you the lore, their preferences forced you to make choices, etc. In Bannerlord, we've spread the role-playing elements around more evenly. There are a lot more potential companions in Bannerlord, and they have backstories, but we want the companion system to feel more open-ended. We want for it to be possible for companions to die (and give the player, say, a motivation to avenge them) or, alternately, for a player to appoint lots of companions to lordships. To that end, we've taken out some of the pre-scripted companion interactions in favor of a more dynamic system. Also, more lords have backstories and those backstories matter more in how the game unfolds.” 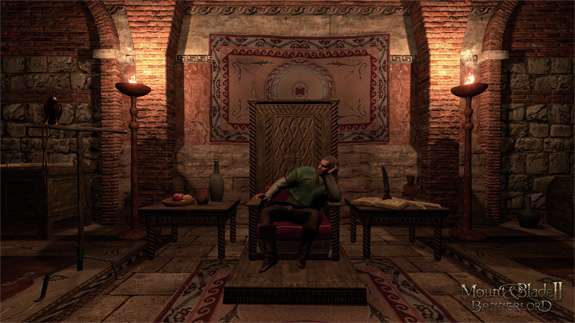 Join the conversation and comment on the forums! (199 comments)