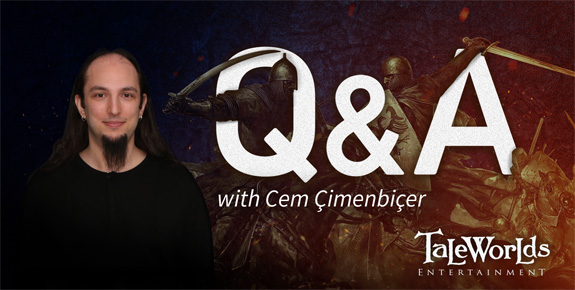 We are back with our series of interviews with TaleWorlds’ team. Today we want to introduce you to a very important role in every development team. Every time a game designer thinks of a cool feature or an animator creates a beautiful movement, there’s someone who has to find a way to make it happen and implement everything in the actual game. You are right, we are talking about the programmers, those code magicians that turn designers’ wishes into reality – and then fix all the issues that usually follow every change: a video game is a very complex system, and changing even the smallest thing can create unexpected problems!

WHAT DO YOU NORMALLY DO DURING YOUR DAY?
"80% of my time is spent writing code. Then I also take care of integrating the code that other programmers wrote, a process during which I check and review these parts, and have a few meetings – our dedicated team, which we call Combat Team, has 2 short meetings every week to synchronise our development efforts."

WHAT DO YOU LIKE THE MOST ABOUT BANNERLORD?
"I love how the game improved with the addition of all the new animation techniques we have implemented, and together with the newly added cloth system, the game feels more fluid and alive."

WHAT'S THE MOST DIFFICULT THING THAT YOU SOLVED SO FAR, DURING THE PRODUCTION OF BANNERLORD?
"Inverse kinematics (which is a system of animation where you go not from how a particular bone is rotated, but from where a particular part of the body needs to be, and then the animation is built from that point back). This system results in much better visuals than what we had in Warband, however once you open this Pandora’s box, it is a huge workload to fine-tune this system, which took us a very long time."

WHAT DO YOU CURRENTLY WORK ON?
“I’m currently working on tweaking the combat system and adding some new features based on feedback from our internal combat tests. One specific example would be trying chambering with a new gesture combo. I hope that it will be more intuitive and have a more satisfactory visual feedback. Apart from these, I usually work on our animation system, network system, individual and group AI, and core gameplay elements like basic movements.”

WHAT FACTION DO YOU LIKE THE MOST IN BANNERLORD?
“You start the game without a faction, and usually you meet the Empire first, so I guess quite a few people will prefer the Empire as their favourite faction. But I like Khuzaits, because of the mechanics of horse archery. I really love that, and no other game gives the same feeling.”

HOW HAVE RANGED ANIMATIONS CHANGED FROM WARBAND? WILL PLAYERS BE ABLE TO MOVE DURING THE ANIMATION AND HOW HAVE YOU BALANCED THIS?
“The major change in bow reloading and shooting animations is that, we used to leave the arrow in the quiver until the player starts readying to shoot. Now the arrow is taken from the quiver as soon as the player is available to do so. This reduces the time required to ready and shoot an arrow, and gives a decent timing advantage to the bowmen. If the player gets disturbed while taking an arrow from the quiver, this action gets restarted on the next availability. This stage difference is also done for the crossbowmen, so the reloading in crossbows is split into two: cocking the crossbow, and placing the bolt. First stage gets cancelled if the player moves during the action, but second stage allows movement. Bowmen are free to move at any stage.

Balancing of all weapons was made after this change, so this new system didn’t cause us too much trouble. By the way I should remind you that the balancing in both weapons and their usage animations are continuously made, so nothing that has been seen in the footages shown should be assumed to be final.”

HOW GOOD IS THE COMBAT AI ON THE HIGHEST DIFFICULTY? WILL THERE BE DIFFERENT COMBAT AI FOR DIFFERENT UNITS IN BANNERLORD?
“Until now, we mainly worked on the tactics of formations and armies, but not the tactics on 1v1 fights. I believe that we will add some variety on that only after we feel like the AI is good enough and missing only unique tactics. So far the AI has been buffed with improved ranged and melee accuracy, decision to use kicking, keeping distance according to combat states and so on. In the end, our aim is to expand the range of intelligence of AI in order to help new players more in combat, and create more challenge for the experienced players. With the addition of more complex army AI, you should also expect a hard time on even reaching the army commanders in the battlefield. And a challenging duel would be your reward (or punishment) when you penetrate the defences.”

IN TERMS OF COMBAT ANIMATIONS, WHAT SORT OF VARIATIONS CAN WE EXPECT? ARE THERE MORE UNIQUE ANIMATIONS DEPENDING ON WEAPON THAN WARBAND?
“In Bannerlord we have quite a few more variations than in Warband. Combatants can be in a left or right stance, which means there are two versions of each and every animation. On top of that, there are two variations of each animation, one for very light and fast, and one for heavy and slow weapons. Any particular weapon uses a blend of those two animations according to its weight. The dirty way of fighting also got additional variety in Bannerlord. Kick works the same as Warband, but it would also be possible to bash with either a shield or weapon in hand.”

WHAT IS THE BIGGEST FEATURE YOU WANTED IN OLDER MOUNT & BLADE GAMES (BUT WERE UNABLE TO INCLUDE) THAT YOU HAVE IMPLEMENTED IN BANNERLORD?
“A custom skeleton system that would support different creatures would expand the creativity of our modders a lot in Warband. Luckily, just like many other moddable things in Bannerlord, this will also be possible to modify.”

WHAT ARE THE DIFFERENCES BETWEEN THE CREATION OF WARBAND 8 YEARS AGO AND BANNERLORD TODAY?
“Actually, this is a quite wide question, so I will limit my answer to only the programming part of it. I started working here in TaleWorlds in 2006, but I officially joined the team in 2008. So I’ve been involved in development of Mount & Blade projects for more than 10 years. The number of programmers working on Mount & Blade games during this timeline increased from 2 (Armagan and me) to more than 20. When there were just two of us, the overhead of designing and discussions was extremely minimal, the codebase was smaller (Bannerlord codebase is 3x that of Warband, including the module system) and our quality expectations were lower. All of these factors helped us in implementing new features within a short period of time. In Warband we doubled our programmer count (to 4!) but everything else stayed similar. When we started working on Bannerlord, the increased number of employees forced us to act more professional in almost every area of the project. Renewed and automated integration tools, team based development, proper QA and testing, design meetings, regular meetings etc. were all introduced during the development of Bannerlord. I could say that, our team turned from “a group of ambitious guys” to “a game development studio” while developing Bannerlord.

Oh, and one strange fact is that the office has felt chillier each year. Most of the others don’t feel the difference, but I do, I really do!”

We would like to take this opportunity to say that 2017 has been a very, very exciting year for us. We went to E3 and Gamescom and had a great time there showing Mount & Blade II: Bannerlord. We have been talking to you week after week for some time now, and sharing an open conversation with you and getting your feedback has been extremely useful, invigorating and empowering (thank you guys!). And of course, Bannerlord is getting better and better, shaping up to be the great game that you deserve. 2018 is almost here, and we expect it to be even more exciting -- we can't tell you more as of now, but stay tuned: you wouldn't like to miss it! We wish all of you and your families a wonderful holiday and the best for the New Year. See you in a couple of weeks!

Join the conversation and comment on the forums! (262 comments)