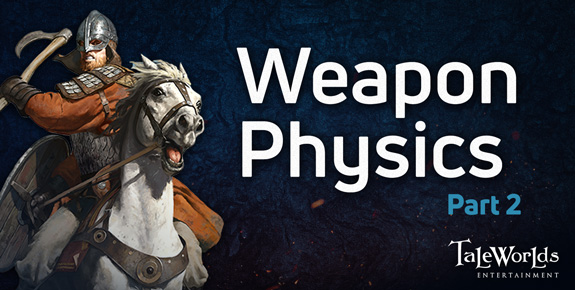 In the previous blog in this series, we described how Bannerlord’s new weapon physics model derives swing and thrust speeds of weapons from their physical characteristics. We talked about how weapon crafting plays a role in determining these properties and how this gives players the freedom to create a weapon which will complement their own fighting style. In this week’s blog, we would like to expand on this topic and explain the rest of the weapon physics model, showing how we determine the damage that a weapon inflicts and how that works in the game.

Damage is a difficult concept to get right in a computer game. Making the damage model realistic could be desirable since this can help with immersion and depth, on the other hand, what happens in a real-life physical trauma is incredibly complex and trying to replicate that in a computer model could easily get needlessly complicated with little benefit to gameplay.

While working on the system we made great use of an excellent article at thearma.org written by George Turner. The article was an eye opener about the intricacies and fine points of weapon dynamics. Of course, during implementation we had to make several simplifications and assumptions and if there are any unrealistic elements or errors in the end result, the fault lies with us and not the article.

Energy and Damage
In Bannerlord we tried to come up with a good model that is somewhat based on physics, but is still simple and understandable for players. In our model, damage depends on kinetic energy dissipated during the impact. However, energy is not converted to damage directly as we use several extra steps in our calculations.

Types of Damage
A weapon hit can have three different types of damage: cut, pierce or blunt. These three types have different trade-offs.

Apart from kinetic energy and damage type, weapons also have a damage factor that can increase their effectiveness. Better made, more expensive weapons will inflict more damage.

Speed Bonus
As our calculations are physically based, we no longer need to calculate an extra “speed bonus” like we do in the previous games in the series. We simply get the attacker’s and target’s velocities and feed these into our equations. This results in a realistic and accurate way where the attack damage is affected by speed.

Impact Point
For swings, damage depends on the location of the impact point on the weapon. When showing weapon statistics in the inventory, we simply show damage as if the attack connected at a point a few centimetres below the tip. During combat we take the impact point from the position of the weapon and the target, so it is not necessarily near the tip. So for example, an axe that advertises itself as having 80 damage can deliver much less if it hits the target near the grip.

Weapon Balance and Damage
Weight and balance of the weapon has significant effect on damage. As we discussed in the first part of the blog, weight and weight distribution basically determines how much kinetic energy accumulated in the weapon’s swing.

Therefore, during the swing, the muscles work to speed up the weapon increasing its kinetic energy. When the impact happens, this energy can go into three places:

Conclusion
Overall, for Bannerlord we strived to create a physics based combat system that will give realistic and immersive results without making use of hidden random variables. This allows players to craft different weapons with individual characteristics and strengths. Hopefully, as players become familiar with the system, they will keep creating new weapons and discovering new techniques and this will serve as a good base to make the game’s combat fun and interesting.


In next week’s blog we will talk with 3D Modeller, Ümit Singil. If you have a question you would like to ask him then please leave a reply in the comment section and we will pick one out for him to answer.

Join the conversation and comment on the forums! (115 comments)