As is traditional, this blog covers our previous major event, goes talks a bit about our experience and what we showed. This time it's E3, possibly the biggest gaming event of the year and the first time we've ever attended with our own booth. Our reveal was Mount & Blade II: Bannerlord's siege gameplay, which came in the form of this trailer and the extended gameplay video below.

Our video begins with the deployment phase, where the player is able to place an array of siege equipment among various fixed positions outside the castle, to prepare the assault. During this phase, it is also possible to arrange troops in formations, and make full use of the order screen, which allows for splitting and merging of formations, in addition to some more detailed options including spread and ranged behaviour etc. This enables you to cater your approach, when deciding how to assault a castle, based on, for instance, the shape of its walls or troop composition of the defending forces.

The equipment you place is built, beforehand, on the overland map. Ladders are built by default, as part of a preparation period required when beginning any siege, and are always available, but lack protection; Battering Rams take extra time and can offer you a fight on even ground, but must be pushed into position and still require you to break through the inner gate with regular weapons; taking the longest to construct and reach the walls, the Siege Tower makes up for its costs by offering a direct route onto the walls, across a level platform. As a player, it is up to you to decide how much time to spend on these, under the pressure of wage costs and food management, as well as the chance a reinforcing enemy army will arrive. 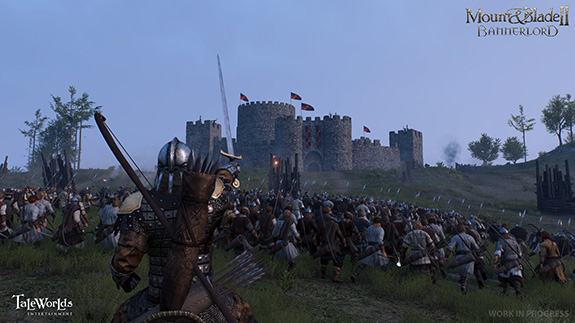 We haven't defined any rules about what works and what doesn't in a siege battle, so really it will be up to players to innovate and explore different strategies to find those most effective. For instance, if your plan hinges on getting a siege tower into position, in order to give your heavy infantry an even footing in the melee, you might want to focus on dealing with the archers that have the best view of your men trying to push it, or that fire ballista, which threatens to leave your ambitions of conquest in a burning ruin.

As the player, you have as much or as little control over the siege as you wish. It is perfectly possible to leave your troops to act on instinct, and they will always try to behave in a reasonable and sensible way, manning the equipment you have placed and attacking or defending the walls accordingly. However, you are completely free to tell them to stop and start pushing a battering ram or siege tower, or leave a mangonel alone, for example, and they will follow your command, letting you take as much or as little direct control as you wish.

One of the major reveals in the siege gameplay is destruction. To lay it completely bare, the following are destructible: Any and all siege weapons and siege engines, all of the merlons (those battlements along the tops of the walls) and the two gates in the gatehouse. Additionally, it is possible to create a full breach in the walls, allowing for your soldiers to pass over on foot, and restricting the mobility of the defenders, who can no longer traverse that section; this is only possible on the overland map, our reasoning being that it should only be possible with a time investment, and to place emphasis on the battle itself being an assault on the walls, rather a time to sit back and bombard. There is a fleshed out bombardment phase on the overland map, during which, the siege weapons you construct will exchange fire back and forth with the defenders', resulting in casualties, as well as damage to the siege equipment and walls.

Destruction is enhanced by the inclusion of fire damage. With some extra investment, it is possible to construct mangonel and ballista that shoot flaming arrows or burning jars of oil. Fire is a type of damage, just like Cut and Piece in the previous games, which is effective against wooden siege equipment, troops and horses. Jars of oil also have an area of effect when they collide, making them particularly lethal in clustered choke-points, such as the murder holes.

Something that is really important to us, when designing the game, is historical authenticity. While Calradia is a fictional land, the raw materials, upon which its built, have a firm rooting in historical fact. Of course, not everything is 100% accurate and there always has to be a trade-off, when balancing playability and realism, but we've made a lot of effort to avoid cutting corners. When you look at the design of the castle we used in the demo, it is structured in a way that purposefully gives a significant advantage to the defending side: Low points in the walls are overlooked by high, flanking towers; the gatehouse holds two gates, forcing attackers into a narrow choke-point, overlooked by murder holes; loopholes and crenelations provide additional cover for the defending archers; defending siege weapons are placed on platforms, allowing them to turn and face multiple threats. All of these have a real effect in the game, and in a way which is completely organic, making it robust and setting a platform for the kind of emergent gameplay we believe players of the series enjoy. 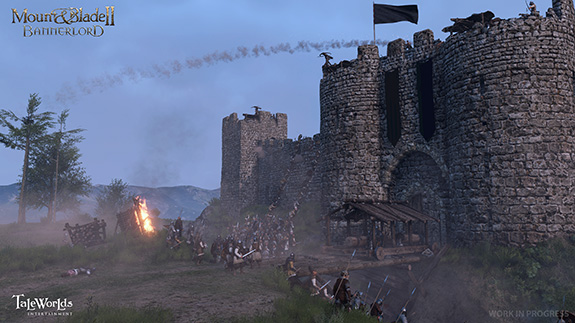 There were a few ways we could have gone about presenting siege, for the first time. Eventually we settled on showing a full, uncut wall assault, from the player's perspective. Ultimately, we decided this is the best way to communicate the feeling of a siege battle in Bannerlord, in the game's current state. This did mean a few errors found their way into the footage, though, which we recognise and will be addressing between now and the game's release.

There are some questions around the video, which are worth referring to; primarily referenced were the shout sounds that matched up with some of those from the old Mount & Blades. While some commenters actually liked the presence of the old sounds, it is worth us reassuring the rest of you that they are, in fact, placeholders. One of the reaction videos mentioned it was hard to distinguish friend from foe, which is (regretfully) even a cause of confusion for the player at one point in the fight! The “banners above heads” option is still present, we simply disabled it to avoid clutter in the video. Many of you spotted the health cheats we used, any many of you preempted our reply... of course, that was just to show the entirety of the battle and account for our inadequacies in combat!

Two additional noteworthy points are the retreating troops and the companions in the battle. When we see the defenders backing into the castle and holding their shields up, to deflect the player's arrows, what they are doing is making a tactical retreat. Like Warband, there is a second phase keep fight, which plays out after the assault. During the assault, some of the soldiers seen are equipped with weapons and armour, not in-keeping with those of their faction. While it is possible, via a number of routes, for troops of any culture to end up in the services of another, what you actually saw here were the companions of the player and the defending lord. In Bannerlord, Lords now have their own companions, much like the player, augmenting their own abilities by employing the services of others. And naturally, these may include individuals from distant lands...

Finally, we'd like to really thank everyone for all the comments we've received and support given around our first E3. There has been a lot of excitement and good number of interesting, useful suggestions as well.

Join the conversation and comment on the forums! (953 comments)