Hello Bannerlord blog regulars and newcomers. In this entry, we are once again responding to your demands to hear more about single player gameplay - specifically, looking at the overworld map and some of the improvements made there. We revealed the map at Gamescom and mentioned some new features in the last blog. Here, we'll take what we've revealed and go into some more detail.

Bannerlord shares the setting of Calradia with Warband but takes place 200 years earlier. The map is also expanded to include regions further to the east and south of that in previous games, resulting in a map which is around three times larger. Land features and even some settlements from the previous games are recognisable. By sharing the same world, the two games become part of the lore of Mount & Blade in a wider sense. While the series' lore was kept to a minimum in Warband, being left to hints in dialogue, Bannerlord features its own storyline that will add some additional depth to the factions.

In addition to acting as the setting, providing the context for Mount & Blade's magnificent battles, the overworld map is also where a large chunk of gameplay lies. With Bannerlord, the approach is to provide more information to the player with the map itself and the HUD presented while travelling. Taking the icons as an example, it is now possible to see what a village produces by looking at its icon. These change dynamically over time to reflect different production facilities constructed in the village, or additions of buildings like castles. On the HUD, more information is presented to the player, including morale, food supplies, gold and more. We are currently restructuring the HUD to provide even more information without making it too overwhelming. 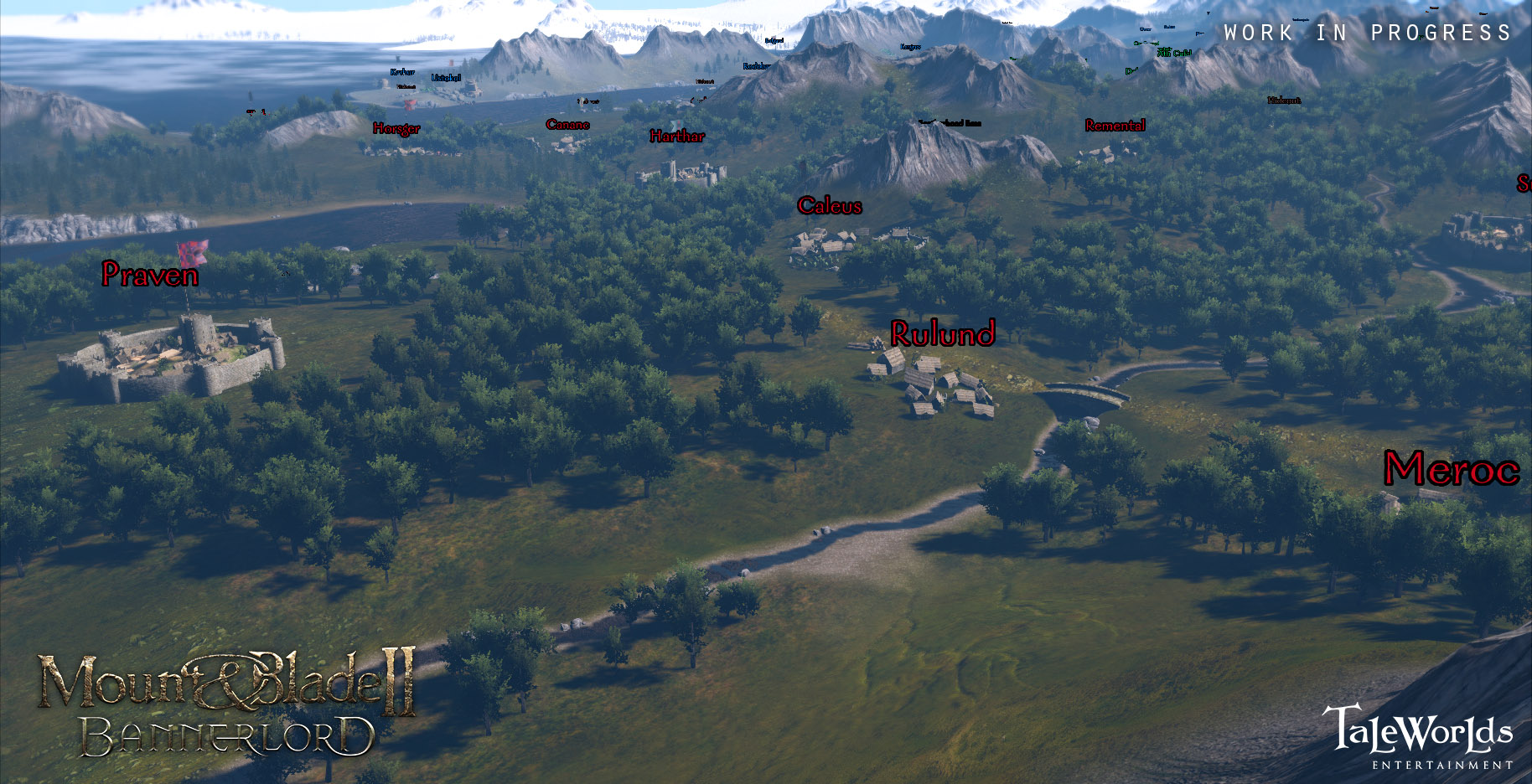 Characters and locations on the map make up what we call “parties”. All parties on the map, whether they are lords, bandits, hideouts or anything, have a function in the game's sandbox simulation of a feudal world. Here is a basic explanation of how the economy works:

-Villages produce goods based on what types of production they have in place (e.g. Sheep farms produce sheep, cheese, wool etc.)

-Peasants take goods produced in their village to sell in the local town by repeatedly travelling directly between the village and the town on the map.

-The raw materials are taken to towns and either consumed or processed into secondary goods (e.g. wool into clothes, sheep into meat) via workshops.

-Goods in towns are bought by caravans to be sold elsewhere for a higher price, caravans will assess the situation and try to maximise profit from their journey over the map.

When all of these steps are completed successfully, the prosperity of the settlements increases. What's interesting, though, is that because everything is connected in this way, disruption can be a very effective approach when dealing with an enemy or rival. A simple example is that raiding enemy villages or preventing peasants from making their journey to the local town impoverishes towns due to their lack of goods to process for trade. More indirect benefits can be received by, for instance, aiding a bandit group near to the fief of a rival noble from the same faction, trying to limit their income and gaining a leg over them in the faction standings. Since everything is simulated in this way, no matter what you do, it has a knock-on effect in the world. Manipulating this to your own ends is key to making progress in the game but AI Lords will also attempt to create problems for opponents, in an effort to better themselves.

The topography of the map is not entirely consistent with Warband, in fact Bannerlord's map is somewhat more mountainous. The effect of this is an increase in the number of choke points. It will be hard to avoid conflict, for instance, when traversing narrow passes through mountain ranges that may be riddled with ambush spots or enemy patrols. Tactically, the map offers many more options for controlling areas that serve as trade routes. Battles are often fought in the game to contest key choke points with the goal of securing passage for trade caravans and other parties. As a player, it is important to consider what kind of warfare you are likely to end up in, before sacrificing relations with a faction. If your speciality is skirmishing on foot over rough terrain, you might for example avoid engaging the Aserai, who will have higher mobility in the open desert.

The map is changed, not just by the activity of the player and NPCs but also by the passage of time. Changing seasons affect the weather and transform the landscape sending snow creeping south during winter. Significant gameplay effects, of the changing conditions, are felt in the effectiveness of different troop types. Cavalry and ranged units in particular will have a harder time in rain or snow. One major change from Warband is how time progresses; the yearly cycle has been shortened to twelve weeks, which adds more importance to the changing seasons and ageing of characters.

In the visual above, we've included 168 screenshots, one taken at midday, each day, from the same angle, over the course of two in game years, running at 10 frames per second. One of the first things you might notice is how the snow advances and retreats during winter. It is also possible to spot the colours above the settlements changing, as they are taken over by different AI factions, battling it out with one another. Something that you may not (or may!) have noticed is how the shadows get longer during winter; this detail is the result of the simulation we carry out to lower the sun's position during winter.

The colours of the factions shown in the visual are subject to change but pre-empting the inevitable question, here is a list of those shown:

Since we haven't shown a lot of the map yet, the visual actually hints at quite a lot which is, as of yet, unmentioned. We'll talk more about how character ageing works, along with some of the other effects of time moving faster, in a future blog. For now, thanks for reading! For the latest news and updates, don't forget to like us on Facebook and follow us on Twitter.

Join the conversation and comment on the forums! (1233 comments)