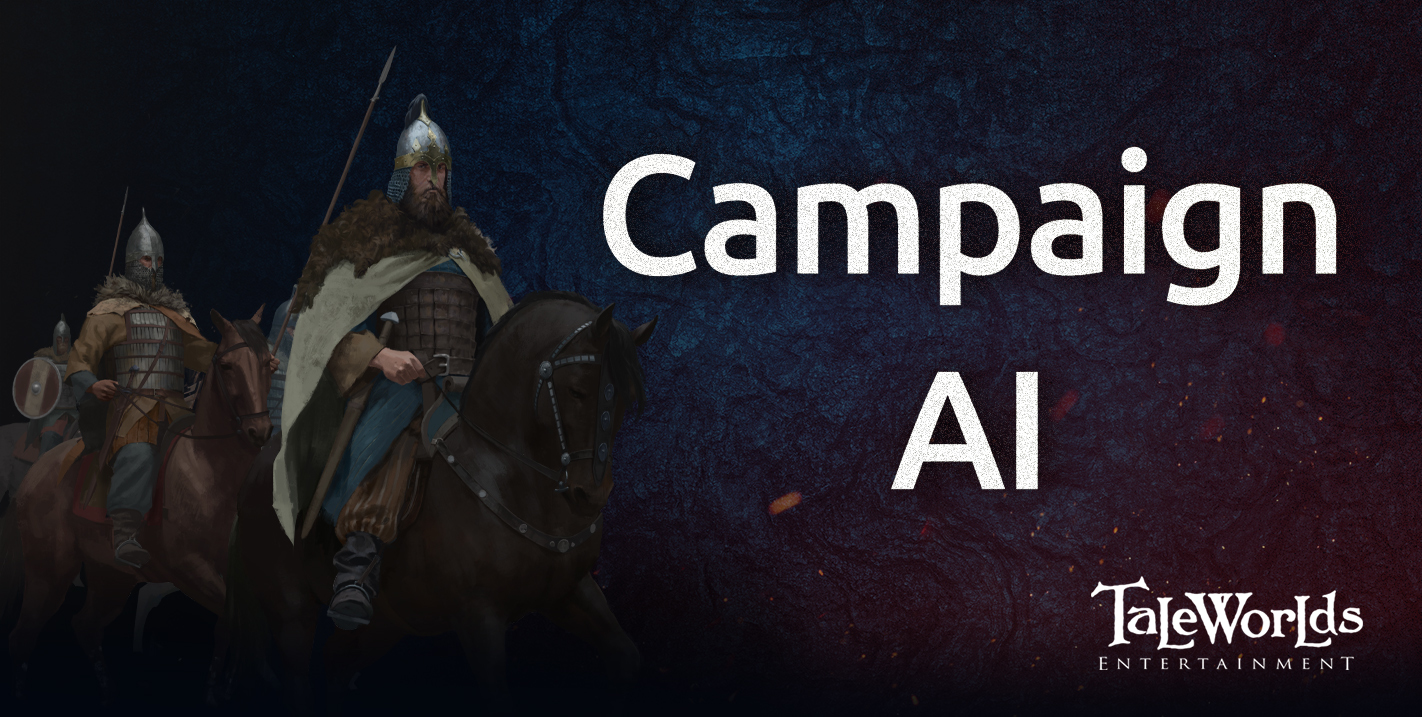 The continent of Calradia is a hive of activity. From small bandit parties preying on merchant caravans to huge armies embarking on campaigns, Bannerlord’s dynamic sandbox campaign presents players with an ever-changing, albeit hostile, medieval world. And no matter if players directly involve themselves in unfolding events or if they simply watch on, the kingdoms, clans, and lords vying for power press on with their own ambitions and goals in mind.

In this week’s blog, we take a look at one aspect of Bannerlord’s campaign AI that helps to support this idea of a living, breathing world, ensuring that lords make sensible choices and prioritise their actions on the campaign map in a logical way that accounts for their abilities, limitations, and needs.

Just like the player, NPC lords spend much of their time traversing the campaign map as they go about their business. And unlike our previous game, Mount & Blade: Warband, in Bannerlord, NPC lords are bound by many of the same restrictions and rules as the player. This change in approach to NPC parties meant that we needed to ensure that NPC lords not only create and react to events in the world but can also perform many of the actions that players are required to do to maintain their party and ultimately progress through the game.

To find an appropriate solution, we first had to consider the different factors that would be important when making these kinds of decisions. The first (and only consistent factor across all possible actions) is the distance that the party would need to travel to perform the action. Naturally, the NPC lord will generally favour closer targets, providing its requirements can be met, of course. In addition to this, the NPC lord will also look at several other factors when deciding which action to select and how to carry that action out.

NPC lords will need to visit settlements to restock their supplies, recruit fresh troops and ransom prisoners. Lords may also decide to visit a settlement, especially if it is one of their own, if they have been out in the field for some time. After all, even NPCs deserve a little rest and recuperation! If a friendly settlement looks to be being threatened, an NPC lord may decide to lend their support to the settlement to try and dissuade the enemy from attacking, or if need be, defend it.

Patrol Around a Settlement

If a party’s needs have been met, and there aren’t any other pressing matters to attend to, NPC lords will lead their troops on a patrol around their clan’s settlements, prioritising ones where hostile troops have been spotted in the vicinity of recently.

NPC lords will ride to the defense of settlements when the need arises, either with just their party in tow or at the head of an army. If the besieged settlement is particularly prosperous or is owned by the NPC lord, then they will be much more likely to make an effort to defend the settlement.

Wars aren’t won on the defensive and under the right circumstances they can be quite fruitful. NPC lords, given the opportunity, will try to get in on the action! When looking at enemy settlements, the lord will check to see how valuable the production of the settlement is, as well as, the strength of the settlement. In addition to this, the lord will consider the relations between their clan and that of the owner of the settlement, favouring to attack ones that they are feuding with. Finally, a lord may decide to raid a settlement that is providing supplies to a connected castle, with the castle being the true target of the action.

NPC lords will try to lay siege to enemy castles when they are confident that they can succeed with the attack. While looking for a suitable target, Warband veterans will be pleased to hear that one factor that is checked is the proximity of the targeted castle to their own faction’s territory, which should help reduce the chances of those crazy expeditions deep into enemy territory to capture a castle they have little chance of holding on to. In addition to this, the strength of the castle is looked at in relation to the lord’s party strength, the prosperity of the castle, as well as, any enemy parties that are known to be in that region at the time.

The final aggressive action that an NPC lord can pursue is to chase down enemy parties. If the enemy party is already being chased down then the lord may decide to safely ignore a particular party, however, if a hostile force is considered to be encroaching within the lord’s faction’s territory, especially if they advance near to a settlement, then the lord may decide to give chase. However, with that being said, a lord won’t foolishly chase after a party that it knows to be faster than their own party, at least not for an extended period. Finally, if an enemy party’s clan has low relations with the lord’s clan, then they might be seen as more of a desirable target that is worth giving chase to. 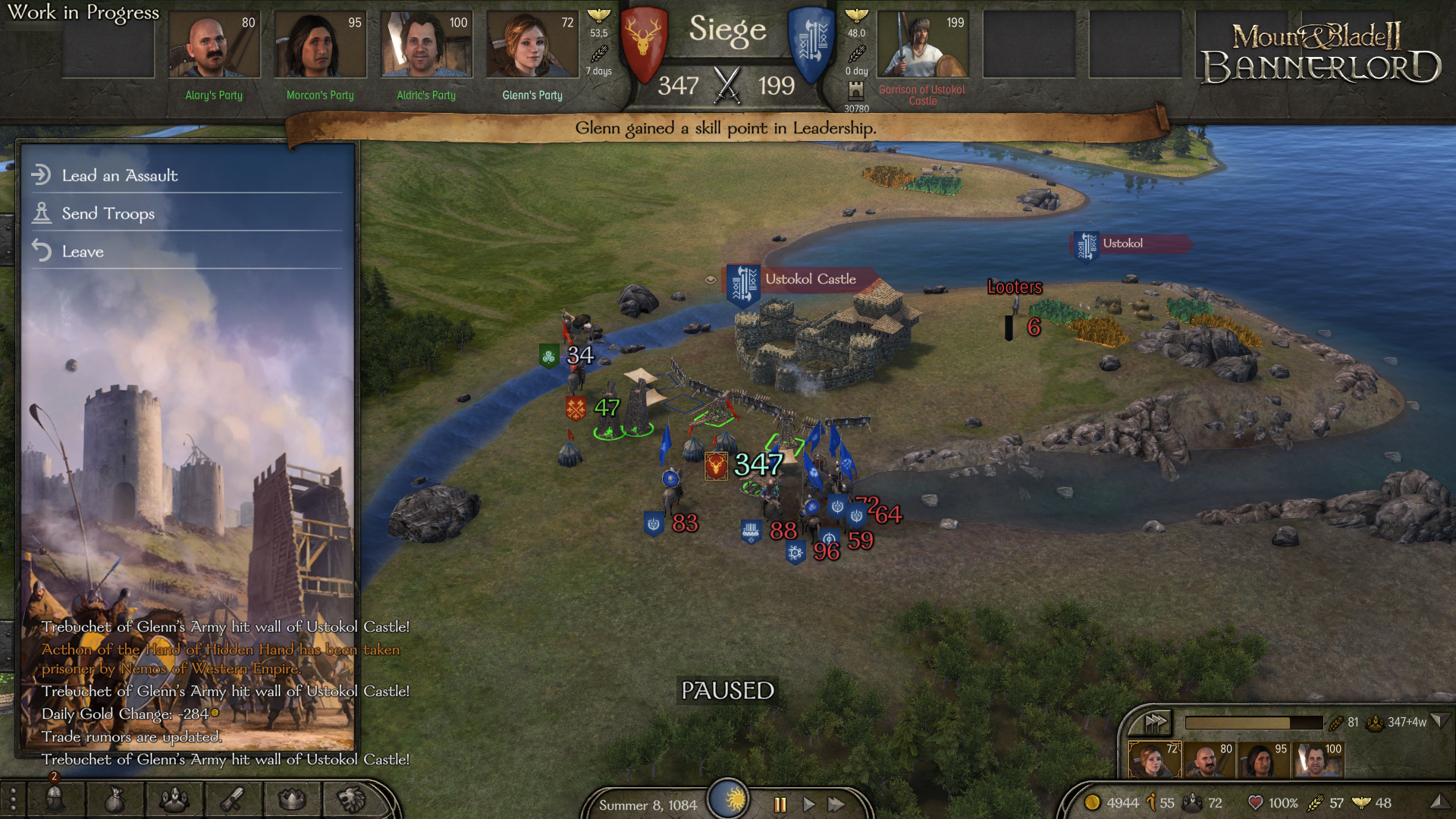 Sturgian Lords gather to break the siege at Ustokol Castle

And that's it for 2019! We will be back in the new year with more blogs and details about Bannerlord's early access in March so make sure to follow us on our social media channels to stay up to date with all of the latest news. We hope you all have a wonderful time over the holiday period!

Join the conversation and comment on the forums! (134 comments)