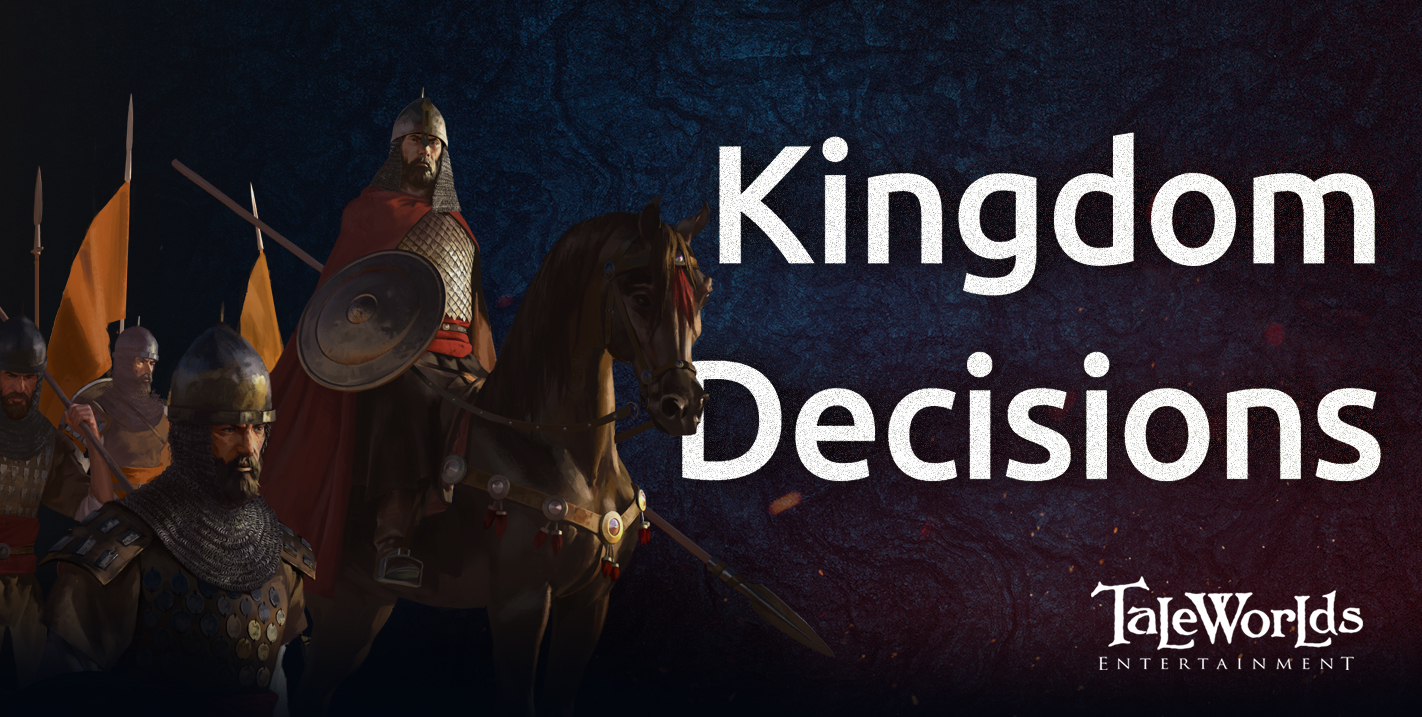 Medieval kingdoms were fraught with internal power struggles, and in many instances, the most powerful people in a realm didn’t sit directly on the throne. Instead, they wielded their influence to shape the kingdom in their image or changed the course of history completely by throwing their weight behind sweeping changes that eroded the power of those above them. Bannerlord’s kingdom decision system is a solution that allows us to represent these kinds of internal politics, leading to a more dynamic sandbox that evolves and changes throughout a playthrough as clans rise and fall. In previous blogs, we briefly touched on the subject of decision making, however, the rabbit hole goes a lot deeper, and so, in this week’s blog, we will be expanding on this topic by discussing how decisions are brought forward, and the outcomes and consequences of voting.

Kingdom decisions come in various types. Kingdoms may have to make decisions on which policies to enact as well as things like who will get a newly captured fief. In these cases, while the ruler makes the ultimate decision, all clans in the kingdom get to have their say by supporting one or the other choice by putting their influence behind one of the options. 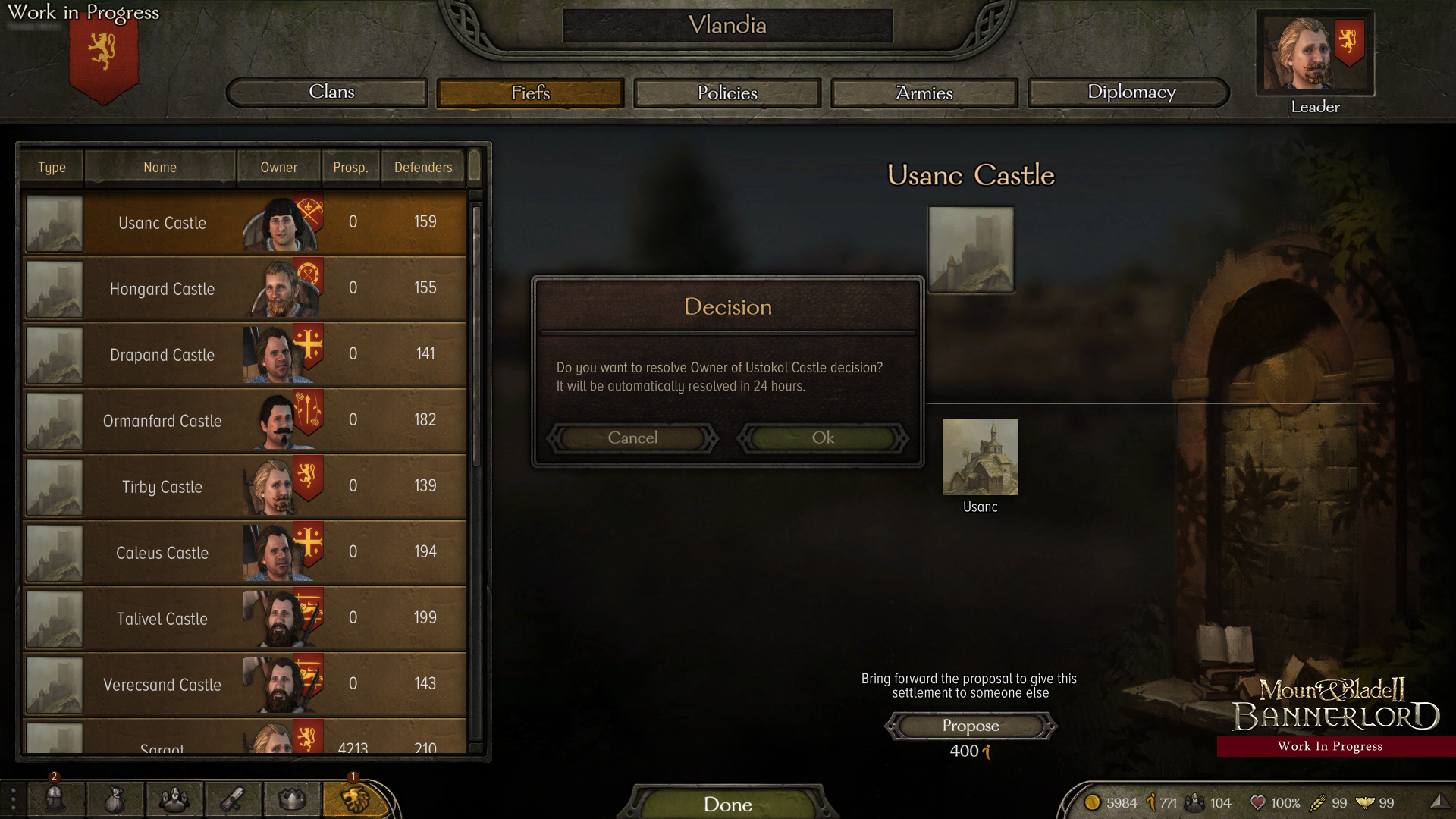 When clan AI evaluates whether to put their weight behind a proposal, it will consider a number of factors:

General Decision Proposal
Before a clan leader can make a proposal, there is a check to see how much time has passed since the previous vote. This is done to help ensure that the system doesn’t become too overwhelming or disruptive for the player, nor create too much instability within a faction. If a sufficient amount of time has passed since the last vote, a decision type is selected randomly, albeit with weighted probabilities.

The system then checks if a clan has enough influence to propose and vote on the decision type, with varying costs per type. Once a decision has been selected, it is evaluated by the clan in question. This evaluation stage is partially unique, as the clan leaders determine their interest independently for each decision type, and with varying factors. If there is no interest in a decision, the evaluation ends without any further steps. However, if there is an interest in a decision, this represents value to the clan leader. This value is reviewed together with the chance that the proposal will succeed and the available influence.

Sponsors
If a proposal is made, the respective clan leader becomes the sponsor of the kingdom decision. Depending on the decision type, an opposition sponsor is then decided. In the case of annexation or expulsion, naturally, the opposition will be the clan leader that the action is targeted against. However, with kingdom policies and diplomatic actions, similar checks to those used to select the sponsor take place to determine the opposition. 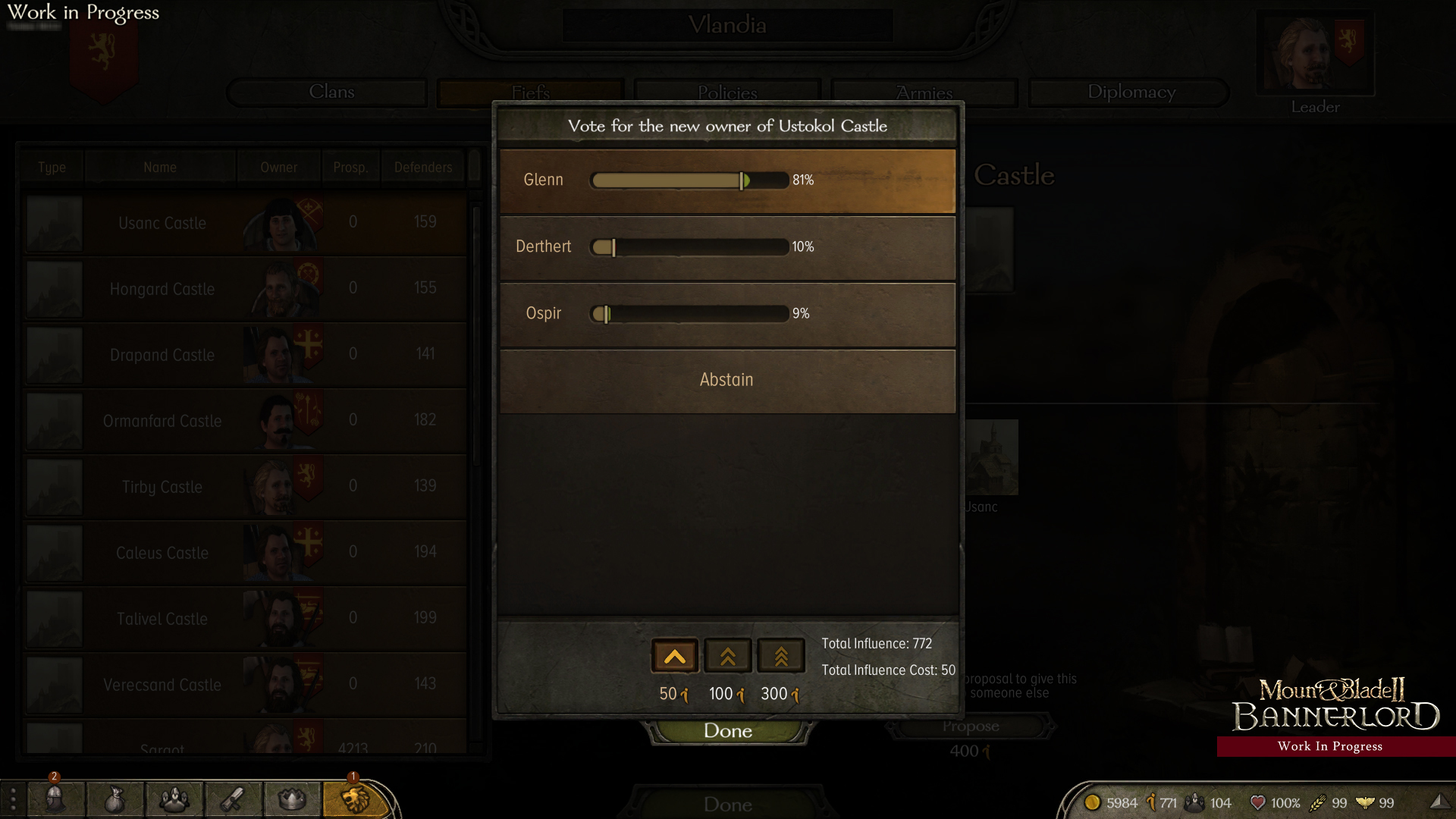 The Ruler’s Vote
Of course, Bannerlord’s decision system represents politics in a feudal kingdom rather than democracy, and therefore the ruler has the ultimate word. However, in order to overrule a decision, the ruler needs to spend influence that is equivalent to the difference between the majority and minority vote. Also, this does risk drawing the ire of their vassals. Consequently, the more support a decision enjoys, the more expensive it becomes to change it. Similarly, if there is a tie, the ruler can freely decide on whether they want to pass or reject the decision. 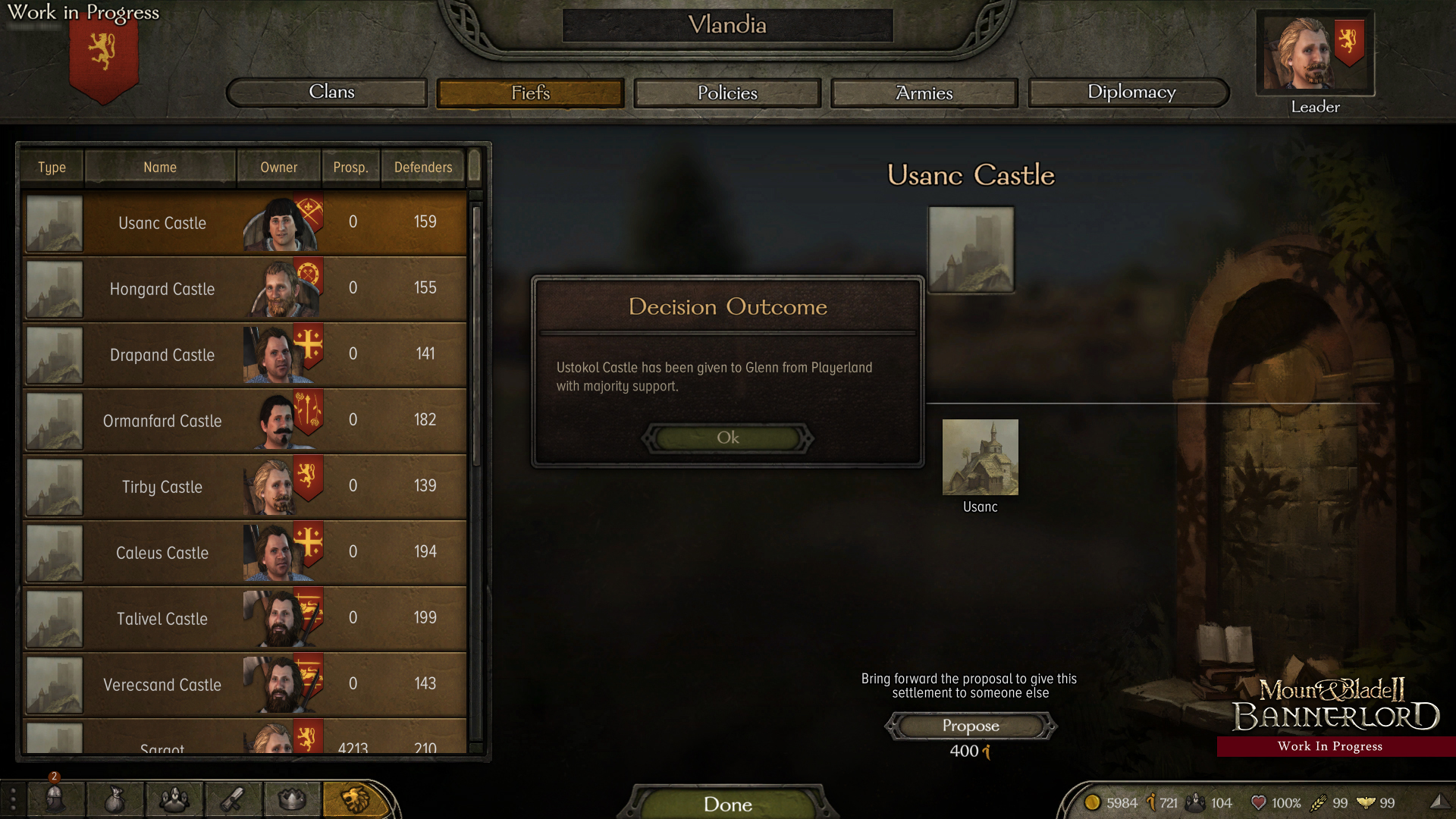 In the end, we feel that Bannerlord’s kingdom decision system goes a long way in helping to represent the dynamics and power struggles that were at the forefront of feudal kingdoms among the ranks of the nobility. It creates an additional strategic layer to the game that wise players can bend and subvert to achieve their own goals. Finally, it presents players with fresh challenges to assess and overcome throughout their playthrough as they rise through the ranks and attempt to cement their position among the ruling elite.

Join the conversation and comment on the forums! (103 comments)