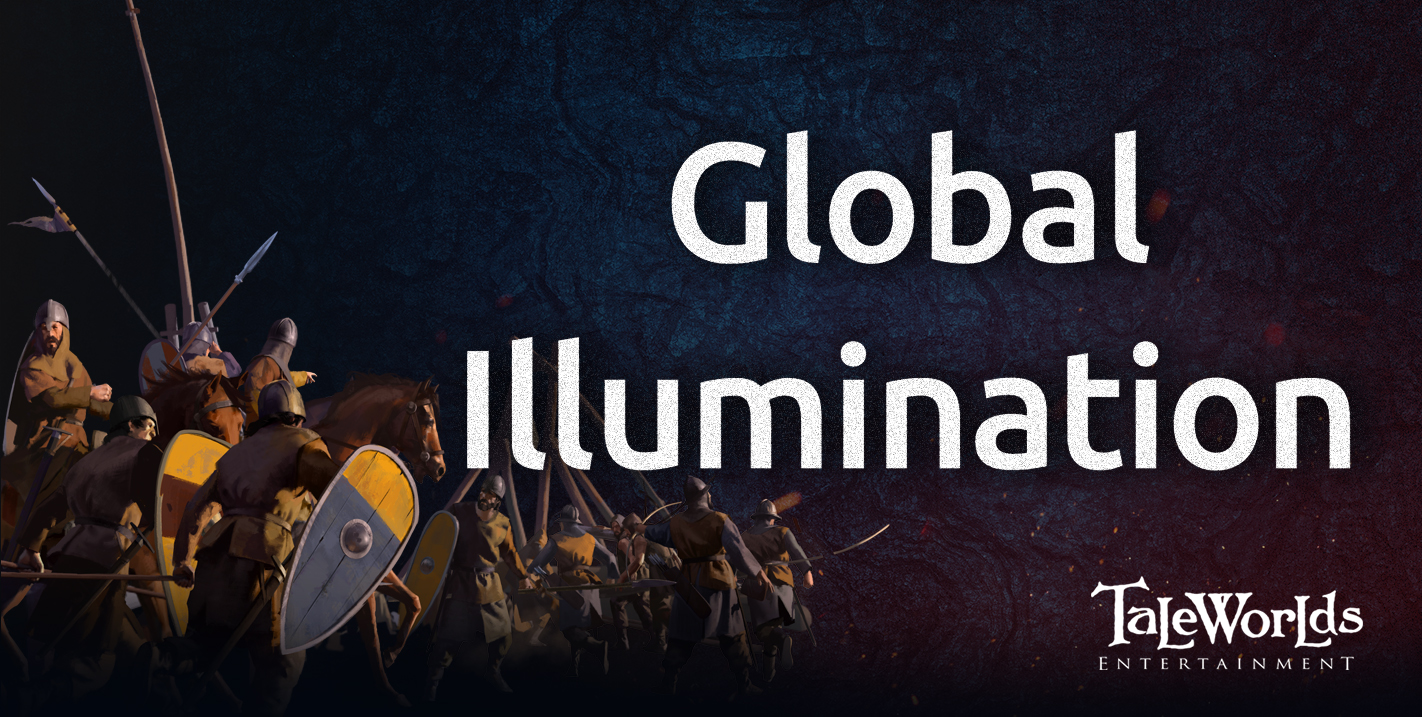 Lighting is an extremely important aspect of any modern game. Bad lighting can make the most detailed models and textures seem drab and lifeless, while good lighting helps to bring together the different visual elements on-screen to provide a more realistic and aesthetically pleasing polish. This is something that we are acutely aware of, and is what led to the introduction of Global Illumination (GI) to our game engine some time back, (which we briefly mentioned at the time in our Engine 1.4 Update blog).

Recently, we have been working on enhancing and heavily optimising this engine feature, so we wanted to take the time to expand on this and discuss GI in a little more detail, covering our requirements, how the system works, and touching on some of the difficulties we faced while implementing it.

So, what is GI? To put it simply, GI is a system that models how light is bounced off of surfaces onto other surfaces, or in other words, indirect lighting. This allows light that has been emitted from a source, for example, a torch, to interact with surrounding objects in a more natural manner with some of the light being absorbed by the object and the rest being reflected onto other objects. The end result is a much more realistic representation of how light acts in the real world.

In Bannerlord, we decided to go for a GI solution that can handle different lighting environments, can run on a wide spectrum of hardware, has low memory and hard drive usage and requires less manual work to be done per scene. With these requirements, we decided to use a static solution that bakes the lighting transfer on pre-defined probe points.

For our implementation, we drew inspiration from multiple techniques. The core lighting algorithm uses the technique from Precomputed Radiance Transfer for Real-Time Rendering in Dynamic, Low-Frequency Lighting Environments (Sloan, et al, 2002). In addition to this, we implemented an in-game offline ray tracer to ensure that the lighting is correct with the ground truth. After that, we modified some equations so that gameplay would not be negatively affected (e.g. increasing the ambient light of torches).

With probe-based methods, such as the one that our engine uses, a major issue is light leaking, which can drastically reduce the visual quality. To solve these leaking issues, we use the shadow map algorithm described in the Irradiance & Light field Probes with Visibility slide (Morgan McGuire, 2017). However, the most challenging and time-consuming part was to implement a process that can automate the probe placement, light leak shadow map placement, and baking process.

Firstly, we didn’t want to place probes everywhere as this would save huge amounts of memory and hard drive usage, which was one of our initial design requirements. So, to achieve the desired visual result while remaining conscious of hardware usage, our automated baking process uses the navigation mesh to find the positions that agents can go. Then, from these positions, rays are cast to find the visible points on the scene. For all of these points, the automatic process then places probes in a grid fashion. Following this, the automatic process assigns shadow-map functionality to the ones that might introduce leaks. For example, an outside probe which affects both the inside of a house and the outside will render a shadow-map to prevent leaking. Finally, the lighting transfer function is calculated for every probe placed. This process is done for every level combination for towns and once for multiplayer and interior maps.

This automatic baking process can be run via the editor or our internal integration system, saving a huge amount of time for our scene designers! And the good news is that this will also be available to modders and is as simple as the click of a button in the scene editor. Also, additional editing time is optimised with many advanced editing operations like lasso and geometric selection operations and shortcuts in the editor.

We are quite pleased with the final results. Our implementation of GI certainly enhances the visuals of the game by adding some visual depth to scenes and making the environments more realistic, and all with a minimal impact on performance!

Join the conversation and comment on the forums! (90 comments)