Hello all Mount & Blade players, curious individuals and accidental Mount & Blade blog readers! We hope you are having a wonderful 2015, so far and that you enjoyed our previous blog by Finn Seliger, covering the music of Bannerlord.

This time, the blog comes right from us and we're going to be touching on an interesting new feature for the single player, something we know a lot of you want to hear about.

One of the areas of our development focus is improving player interaction with NPCs and other factions and making this part of the game feel deeper and more meaningful. In order to facilitate this, early in the development we decided to use a dedicated bartering screen. We have been working on this new feature for some time now and it has matured to a point where it adds a lot to gameplay and has many interesting details we can talk about.

As shown in the screenshot, the bartering screen is fairly self explanatory. The right hand side presents a list of things the player can offer towards the deal, and the left hand side shows what the player can demand from the other party. This is a simple system that makes deals easy to create and view, with potential offerings grouped together for ease of use. 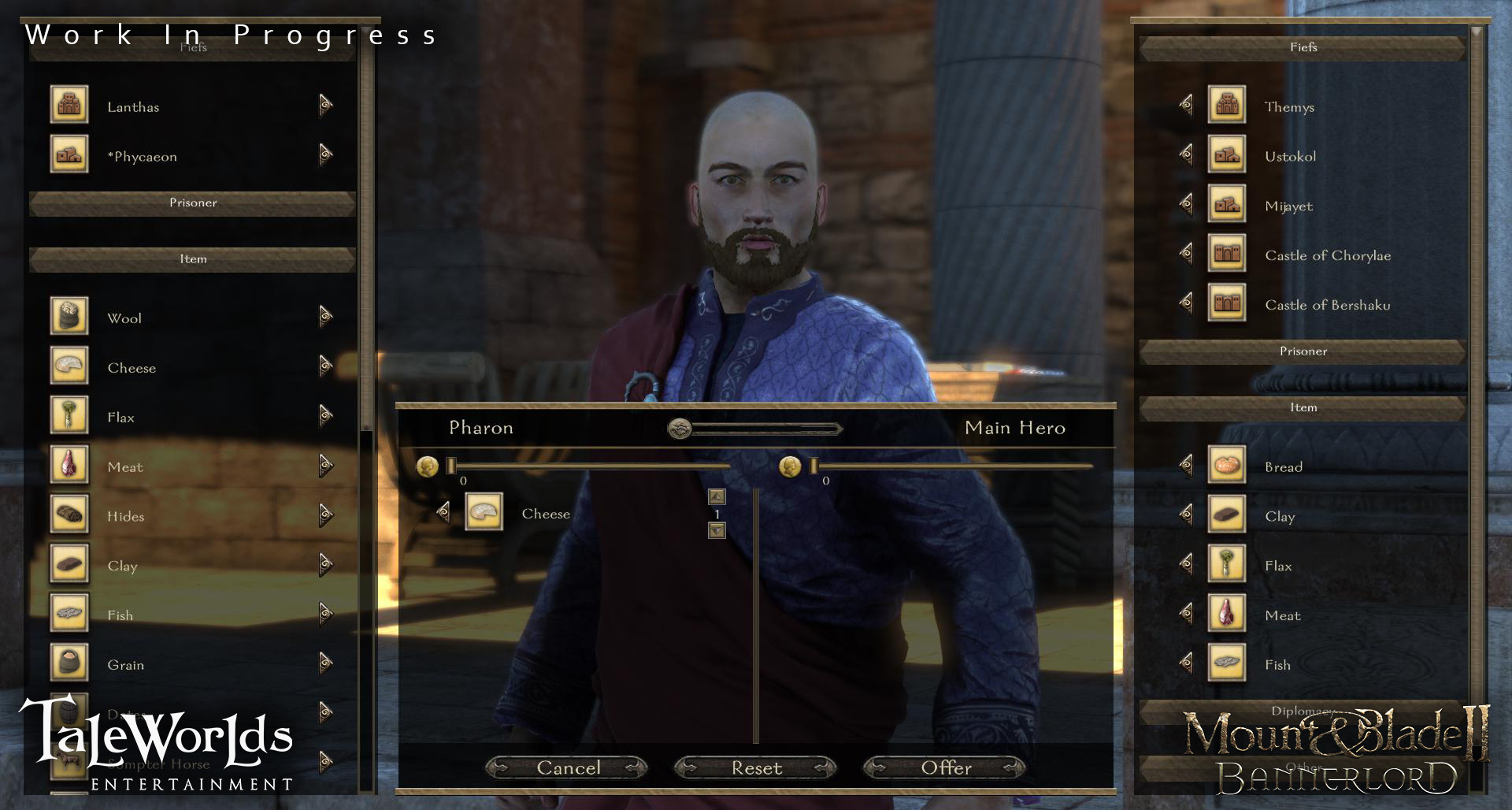 The satisfaction-meter in the middle demonstrates the other party's willingness to accept the deal and so is the key indicator for the player, when putting together a barter offer. Satisfaction changes as we add and remove items into the offer. It is also affected by other factors such as player skills and relation to the character -and especially- the needs of the other party. Certain goods and arrangements have different values for different NPCs. For example, setting free a character who is held prisoner may be worth quite a lot to the prisoner's family and to a lesser extent, other NPCs in the same faction, while this may be of essentially no value to characters who are completely unrelated.

The things that can be exchanged in barter depend on context as well. When bartering with enemies, you are able to negotiate peace deals, while barters between a king and his vassals could consist of granting ranks within the kingdom or awarding of fiefs.

Under the hood, the game takes what might be called a rather materialistic approach: In the world of Bannerlord's barters, everything has a price; the game internally assigns a numerical value in the game world's currency --denars to every possible item in a barter, then uses this monetary value to evaluate whether a deal is good or not. Something to be careful of, with this kind of system, is the potential of counter-intuitive results arising: For example bribing your arch-enemy to join your faction, if you pay the right amount. In practice though, this is a non-issue. The system will typically assign such exorbitant values to decisions of this sort, that these will be extremely difficult, if not altogether impossible, for the player to attain.

The sandbox AI can use the barter system just like the player. We have a system in place that finds parties which could be interacting and then tries to build barter offers that would be acceptable to both parties. For example, if one of your vassals has low loyalty and there is a rival king nearby who has a fief to spare, there is a chance that the king will entice your lord with the promise of the fief and your vassal will defect. Handling AI interactions in this way is a great boon for the strategical campaign as it makes the game much more interesting and unpredictable, while retaining balance and realism.

We hope you enjoyed reading about this new feature for Bannerlord and we are looking forward to sharing more information about the progress of the game soon.

Join the conversation and comment on the forums! (899 comments)