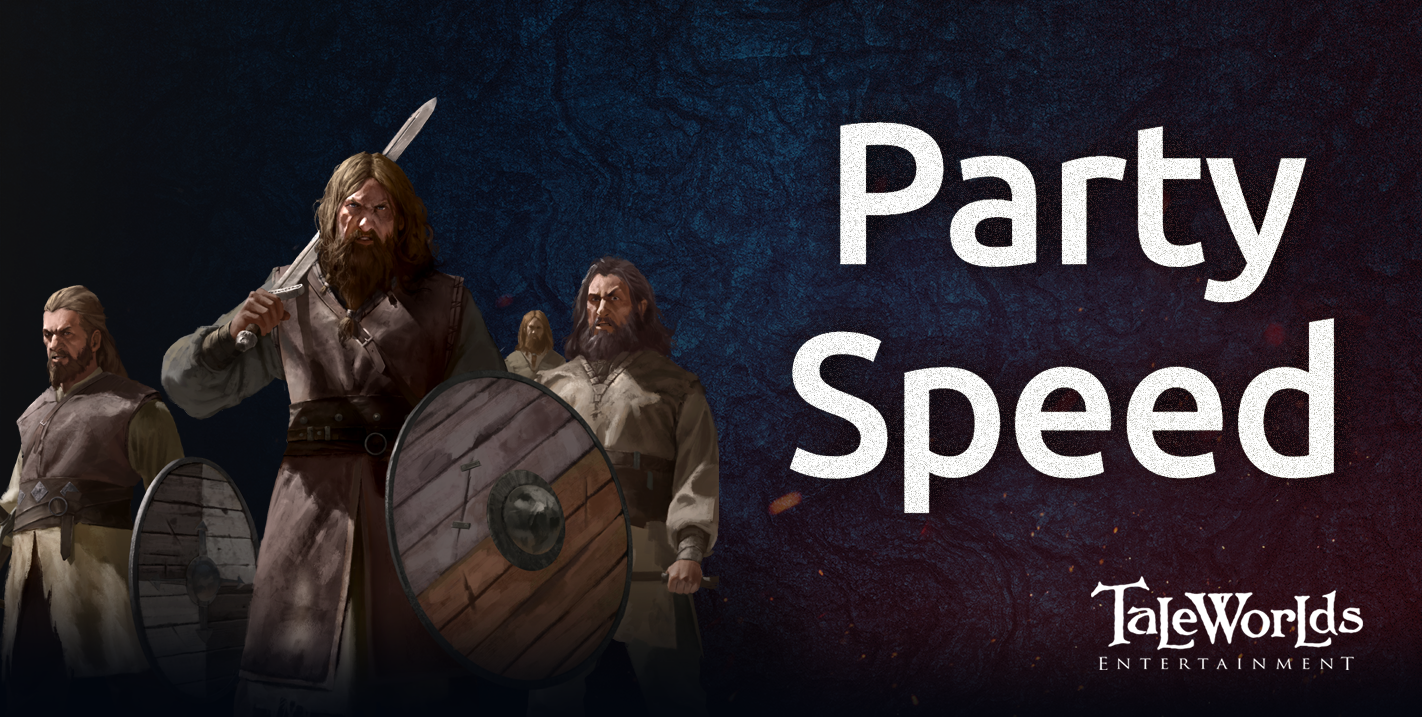 As an enterprising adventurer in Bannerlord, sometimes it feels like your party never goes fast enough. Those pesky steppe bandits that are pursuing you keep closing up; Queen Rhagaea was expecting that quest to be finished yesterday, and all that butter you are carrying to the market isn’t getting any fresher! You need to go faster… but have no worry, dear reader, for this week’s blog is about party speed. Just read on and you will master the art of outrunning your opponents in Bannerlord in no time.

Now, previous Mount & Blade games already had rather detailed systems for determining party speed that took into account things like party size, mounted units, carried goods, prisoners, character skills, morale, terrain and day/night cycle. This allowed for some unusual gameplay options like dropping your loot or releasing your prisoners to escape pursuit. Of course, for Bannerlord we cannot have players feeling any less stressed about their speed, so we came up with a system that takes into account all these factors and even adds some new stuff to worry about...

One thing is that, while adding more detail, we also wanted to make the mechanics a bit more transparent. The game, after all, can bring your party to a crawl but it should at least have the decency to explain to you why everyone and their cow can move faster than you on the map. Our previous titles were a bit lacking in the transparency department since they didn’t share much beyond the end result... 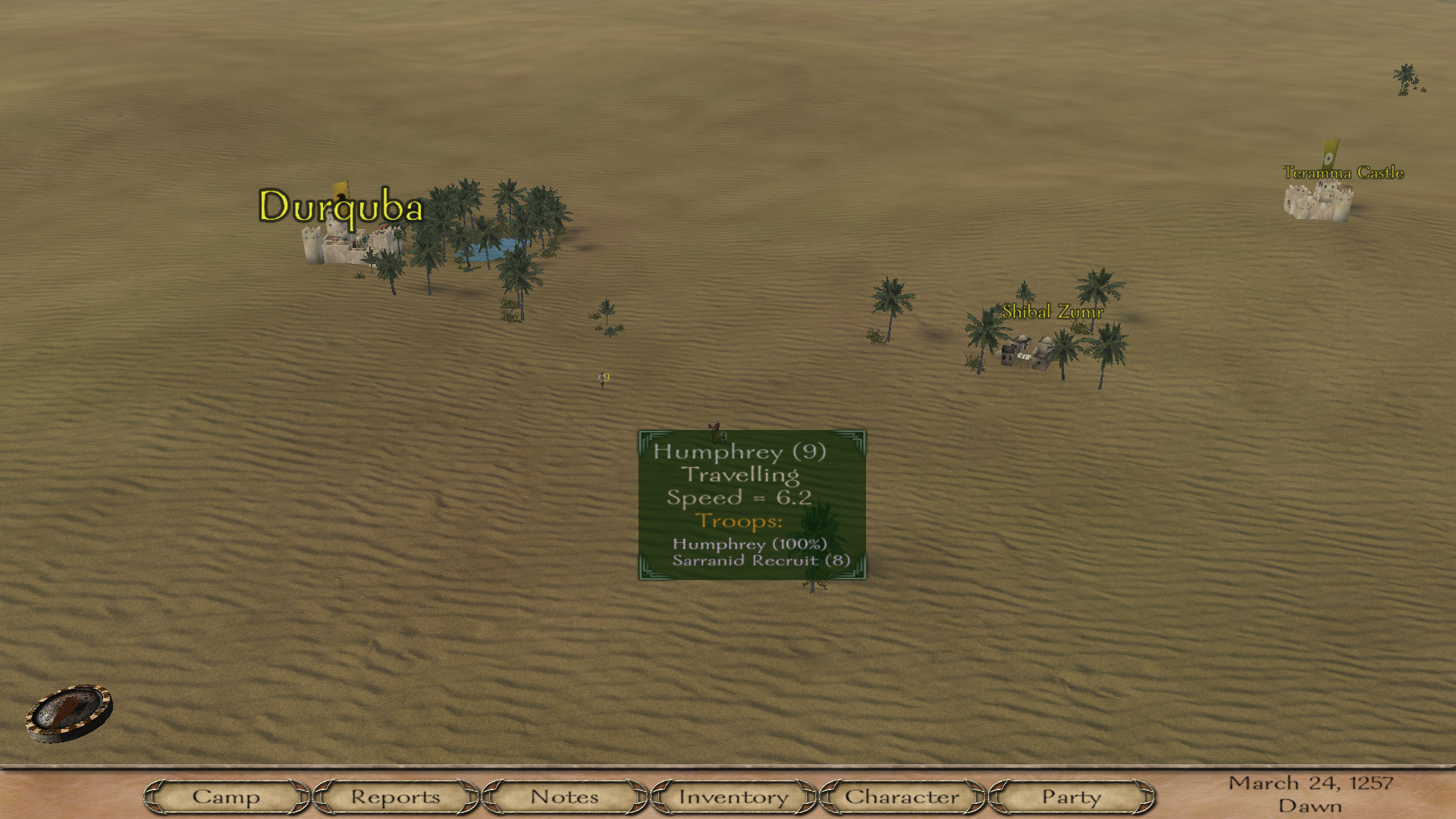 For Bannerlord, we decided to include player’s party speed on the info bar, so that you could check it at your leisure. Also when you mouse over this bit, the game helpfully shows a tooltip, explaining the break-up of the factors that contribute to the final value.

The tooltip may look like a small addition, but it showcases one of our most favorite new features: In Bannerlord, we use a system we call “explained numbers” that are useful for not only doing arithmetic as usual, but can also explain how a particular result was obtained. This system is used for calculating almost all in-game stats, and makes it trivial to put detailed tooltips all over the place as well as removing the potential for error in showing the break up of a particular stat. 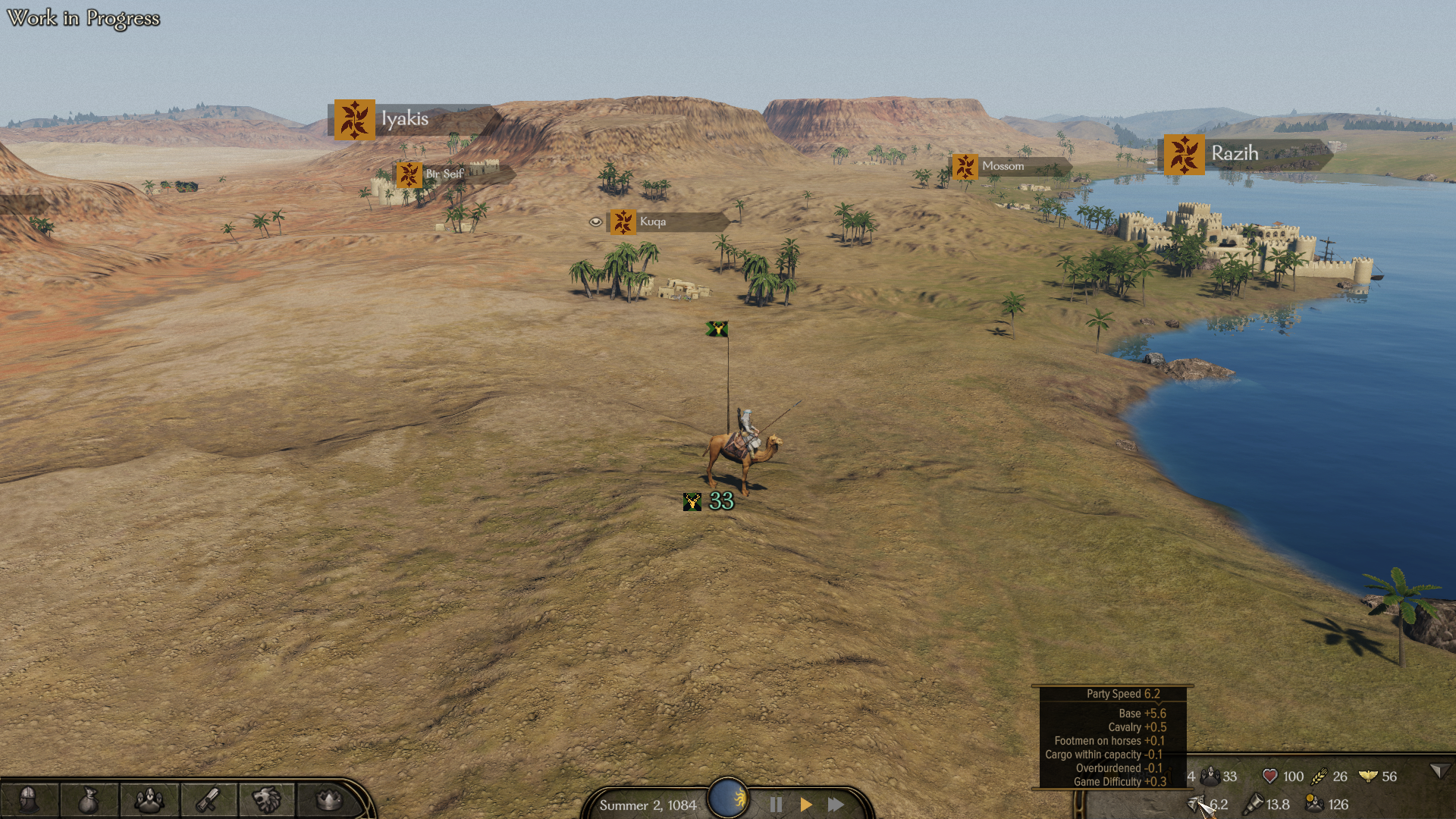 Now let’s move on to the details of speed calculation. For calculating party speed, Bannerlord continues with Warband’s tradition which can be summed up as: “Four legs good, two legs bad.” Your cavalry, mounted on fine steeds will pull you forward, while your infantry will sluggishly slow you down. Fortunately, you can mitigate this to some degree by carrying additional horses in your inventory: When any number of spare mounts are available, the game will consider that number of your footmen as mounted infantry. Mounted infantry is considered halfway between cavalry and infantry regarding speed, as they travel on horseback but are not quite as proficient riders as dedicated cavalry.

While the makeup of your party is important, its size is also a concern. Typically, the more soldiers you have in your party, the slower it is.  This nicely balances the game since it allows weaker parties to outrun stronger foes, and is also quite realistic as anyone who has taken part is a class trip can attest to: More people means more traffic jams and getting in each other’s way, more stragglers, more pee breaks and more opportunities for getting lost while everyone has a different opinion on which way to go...

Another factor to watch for is cargo. This has a marginal effect on your speed as long as it’s below your party’s carrying capacity. However any amount above carrying capacity is very detrimental and will quickly bring your party to a crawl. Fortunately, you can increase your carrying capacity by having pack animals (mules, sumpter horses and pack camels) or by just having more men. Finally, in accordance with “Four legs good, two legs bad” philosophy, cows and other kinds of livestock aren’t counted as cargo as they helpfully carry themselves.

Now it may seem like the answer to all your problems is having more spare horses in your inventory, and this would be true to a degree, however there’s a catch: We also have an extra “Herd” effect for party speed, and having an excessive number of horses and other animals in your party will have a detrimental effect, as the game assumes that your troops will be having a hard time trying to herd all those animals. 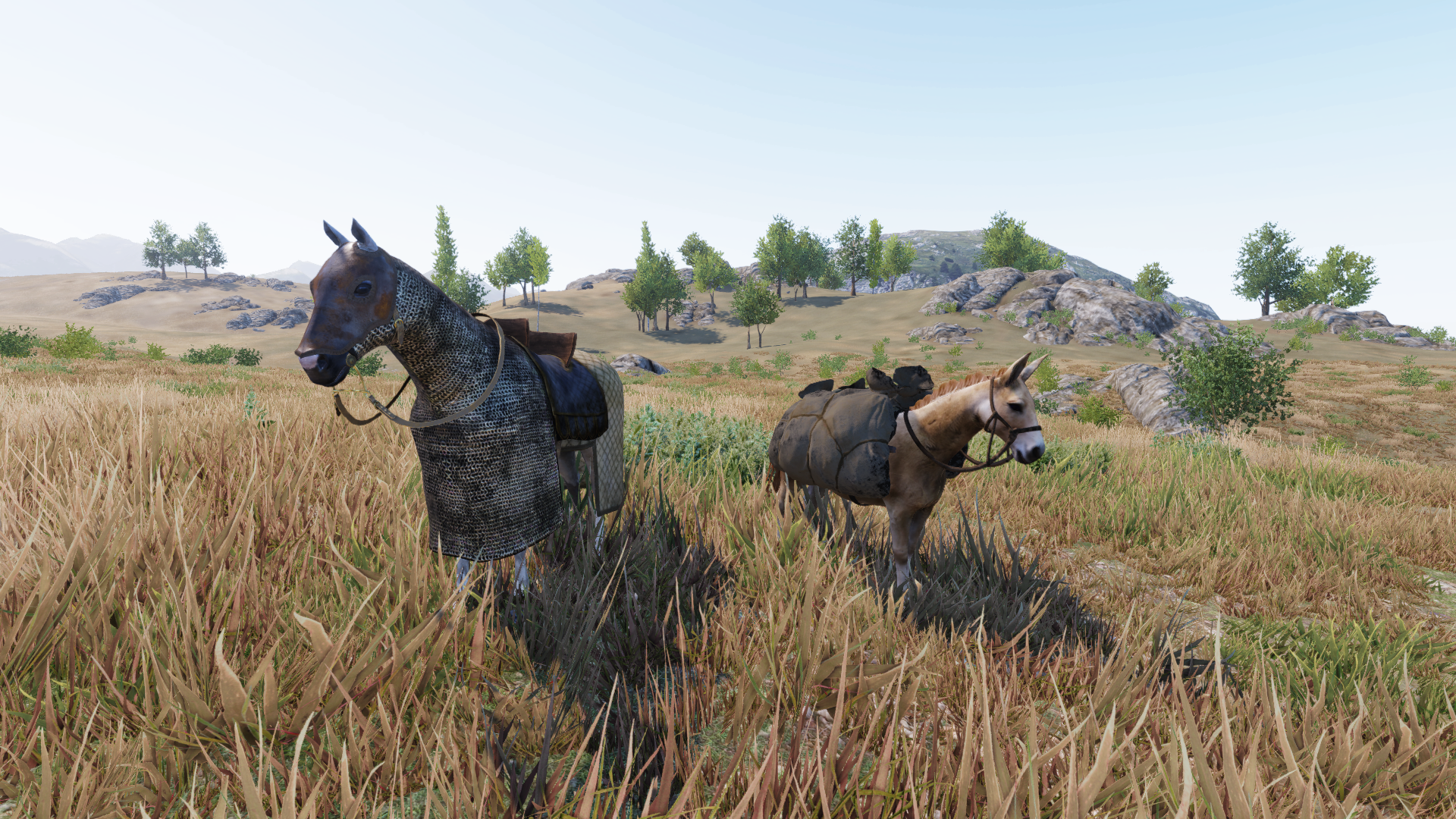 So far so good, but what happens when you are in an army? This is easy enough as the army speed is calculated in exactly the same way as party speed, with the entire army being regarded as one big party. This means that parties in the army not only combine their strength but also behave as if they pool their resources such as spare horses, inventory capacity etc. together.

So, that explains Bannerlord’s party speed mechanics in a nutshell. There are still a few aspects we left out such as the effect of terrain and seasons and leader and companion skills, but we’ll hopefully touch upon those in other contexts.

Join the conversation and comment on the forums! (156 comments)