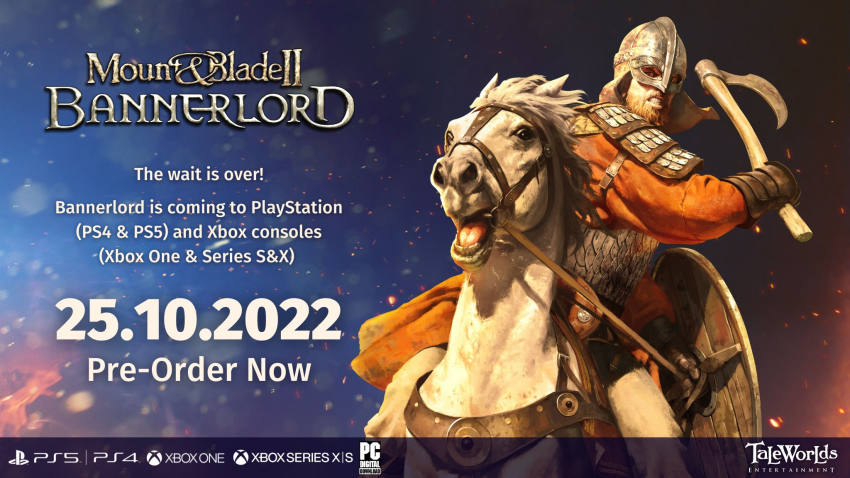 We’re thrilled to announce that Mount & Blade II: Bannerlord will release on PC & Consoles on October 25th, 2022. It will be available on Playstation 4, Playstation 5, Xbox One, Xbox One X and Xbox One S.

We have developed Mount & Blade II: Bannerlord as a multi-platform game since day one. The console version will as such have the same gameplay features as the PC version. The currently available PC Early Access, will also move on to full release, along with the console launch on the same date. But do not fret - While this marks an important milestone for the game, it is not the end of the road for Mount & Blade II: Bannerlord, which will keep receiving updates in the months to come.

“These two years have been a long and challenging road. Developing a massive and complex game such as Bannerlord, for several platforms, and in the middle of a pandemic, is no easy task and I’m incredibly proud of our team for its relentless, brilliant work. Despite the challenges, it’s also been a rewarding path: we’ve found many synergies that we weren’t initially expecting between consoles and PC, synergies that have made the game grow and be better than it would have been in other circumstances. We’re looking forward to putting the game in the hands of our amazing community, which has been supporting us on consoles since Warband.”

We’ve also made our way to this year’s Gamescom in Cologne, Germany. The Covid-19 pandemic meant that the physical part of Gamescom had to be canceled during the last two years. This, in combination with the opportunity to showcase and let you experience Mount & Blade II: Bannerlord on consoles, makes us all the more excited to be meeting you here again. You can join us at the Gamescom Public Area in Hall 9, Booth 22. We will also be present in the Business Area in Hall 4.

We will be sharing daily updates of what’s happening on-site through our social media channels (Instagram, Twitter, Facebook). We’ll have some rewards to give out so stay tuned!

The game is available for pre-order now via the Playstation and Xbox stores as well as major retailers.

DISCUSS THIS POST HERE (and check some behind-the-scenes photos from Gamescom)!