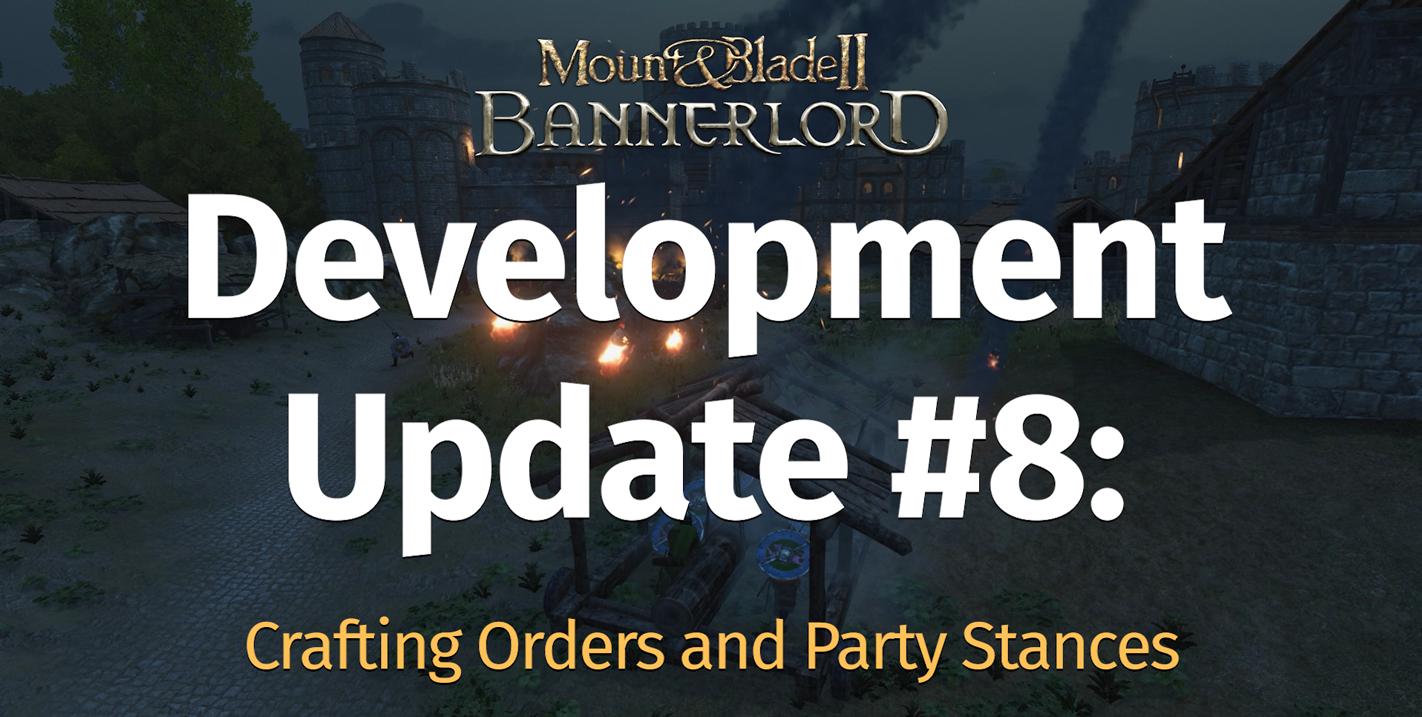 In this development update video, we take a look at some of the updates and changes to the game in e1.5.10 and e1.6.0. As always, a text version can be found below!
INTRO

With e1.6.0 available in beta and e1.5.10 on its way to live soon, we thought it’d be a good time to share another development update to discuss the latest changes to the game. So, here we are, Development Update #8... let’s do it!

First up, we have a new campaign intro video that helps to bring you up to speed with the recent history of Calradia and establish the setting as you set forth on your adventure.

You’ll need to start a new campaign if you would like to experience the video in all its glory, or, if you are too invested in your current playthrough, you can watch it here on our YouTube channel instead!

If you do decide to start a new playthrough, make sure to check out the new campaign difficulty presets which provide you with some helpful suggestions for the game’s difficulty settings. Newer players may want to consider starting out with the Freebooter or Warrior settings, which represent Easy and Normal respectively, while more experienced players may wish to opt for the more difficult Bannerlord preset. These presets are accompanied by a number of additions and changes to the difficulty options that allow you to further tailor the game’s difficulty to your liking.

For those of you that are a little more adventurous and prefer to play the game on the latest beta branch, you can increase the game difficulty for your next playthrough even further in e1.6.0 by activating the new Iron Man mode that restricts your campaign to a single save file.

A new player character visual was added to the save/load screen that helps to remove some of the burden from your memory when it comes to recalling characters from your save files, especially if you have multiple ongoing playthroughs. However, please note that you will need to load and save any existing save files for this update to take effect.

A whopping 36 new settlement scenes have been added to the game, with 23 villages, 3 castles, and 10 towns available for you to explore and conquer.

Unfortunately, there are a few too many to showcase in this video, but you can find more info on the scenes in the e1.5.10 patch notes, which you can access from the link in the video description below.

Locating raw materials is now much easier in e1.6.0 with the addition of production icons to village nameplates. The icons can be seen at any distance meaning that you can find whatever resource you are looking for directly and conveniently on the campaign map.

Taking an oath of fealty was made more rewarding in e1.5.10 with the introduction of a welcome gift from your new liege. You can expect to receive special gear and elite units upon bending the knee and joining each faction for the first time.

Just before you put those shiny new elite troops and gear to the test, you might want to check out the updates to the Kingdom Diplomacy war tab for a more detailed overview of the wars you are currently engaged in.

Alongside the additions and changes to the kingdom comparison bars, a new tab has been added that allows you to see recent events from a selected conflict, giving you a better idea of how each war is progressing.

After checking out the Kingdom Wars tab, you may wish to consider making use of the new party stance system that allows you to assign a general stance to subordinate parties to influence their behaviour on the campaign map. These stances are: defensive, aggressive, and neutral. With defensive, parties will refrain from initiating hostile actions towards enemy settlements and will tend to focus more on patrolling and seeing off any threats within their own territory. With aggressive, parties will be much more inclined to seek out confrontation and take the war to the enemy. And with neutral, parties will be left uninfluenced while making these decisions.

Another e1.5.10 update that gives you much greater control over your clan parties is the addition of wage limits. This allows you to limit the wages of all of your clan parties and garrisons to prevent them from over recruiting and maintaining too many troops.

If overseeing a kingdom isn’t really aligning with your current goals, you can use the new Abdicate Leadership button on the Kingdom screen to trigger a leadership election, freeing you up to explore other avenues, like becoming a simple blacksmith perhaps...

Over in e1.6.0, the crafting system has been greatly expanded with the addition of Crafting Orders. Notables and nobles will now post-production orders for different weapons in the Orders window of the Smithy, and it is left to you to create a design to satisfy their requirements. You’ll be rewarded with crafting experience, research points for unlocking new weapon parts, relations, and gold for successfully completing a contract, with additional bonuses and penalties being applied for exceeding expectations or under-delivering.

This update is accompanied by a number of useful UI updates to the crafting screen, such as being able to see the smithing skill value of your companions, an indicator for newly unlocked pieces, and the ability to hide locked items.

A number of new facial expressions have been added as the default idle animations for NPCs based on their traits and relations with you. From now on you should expect to be met with warm smiles from friends, indifference from strangers, and utter contempt from enemies.

We all know that one of the most important parts of the game is how your character looks, which is why three new battle crowns have been added in e1.6.0 for you to strike fear and awe into the hearts of your enemies through your sheer gloriousness… or at the very least it lets them know that you are worth taking alive!

And finally, Custom Battle was updated in e1.6.0 with the option to select individual troop types to spawn in each formation, allowing you further customise each battle to your liking.

And that’s about it for Development Update #8!

Please let us know what you think of the updates in the comment section below, and remember that you can always head on over to our forums if you need any assistance or if you want to leave more detailed feedback. A link can be found in the description below.

Thanks for watching and we hope to see you again next time!